It’s amazing to see a vintage 1989 clip of Goldie Hawn presenting at the Oscars with Kurt Russell because it’s easy to see how much Kate Hudson looks just like her mom. Hawn posted the throwback video in honor of her beau’s 70th birthday. 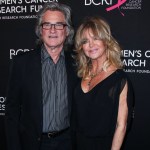 Besides their sparkling personalities, the mother-daughter duo shares an effervescent smile and mischievous glint in their eyes. The video Hawn posted is really cute, too — that’s where you can see the similarities in action and the actress’ sweet relationship with Russell. The longtime couple is seen teasing the audience with a marriage proposal as they present Best Director.

“There’s only one thing we are not,” responded Russell.

“Married,” he said with a grin as the audience laughed.

“Is that a proposal?” she flirtatiously asked.

“You’re putting me on the spot,” he continued. “I guess now is as good as a time as any.”

We all know the answer to their banter — they’ve stayed happily unmarried for decades and Hawn addressed that in the caption, “Happy birthday baby! What a wild ride,” she wrote. “No, we never got married, but one thing that continues to grow is our love. You’re a wild one, brilliant, lovable, childlike, perfectly maddening, a father supreme and deeply funny!”

Russell has been a second dad to Hudson and her brother, Oliver Hudson, as well. He played an important role in their lives after Hawn’s kids were estranged from their biological father, Bill Hudson. And The Christmas Chronicles 2 star seems to appreciate the love he gave her kids — and, in a sense, their kids.

“I can’t imagine my life without you at any age, Kurt Russell,” summed up Hawn. “You’re the catch. And you’re all mine ❤️”

Before you go, click here to see all the celebrity couples with the best stories behind how they met.