Grace Knowlton, a sculptor who favored the elegance of the sphere, and who presented it in multiple materials and distended shapes and in sizes that ranged from the ornamental ball to an eight-foot boulder, died on Dec. 4 at a memory care facility in Old Tappan, N.J. She was 88.

Her daughter Samantha Knowlton said the cause was complications of dementia.

Ms. Knowlton, one of the few female modernists to break into the masculine world of outdoor sculpting, created orbs of all manner, with surfaces that were rough, smooth or sometimes cut into shards, or broken and left with gaping holes. All were part of what she called her “work in the round.”

Her spheres have been exhibited at the Metropolitan Museum of Art, the Museum of Fine Arts, Houston, the Victoria and Albert Museum in London, the Corcoran Gallery in Washington, Hirschl & Adler Modern in New York and scores of other places. She liked to show them in groupings that she arranged spontaneously, creating their own internal dynamic in relation to one another.

Ms. Knowlton, a highly eclectic artist, was also a painter and a photographer and liked to draw. She also created a full-blown artists’ colony on her property in the exclusive hamlet of Snedens Landing, in Palisades, N.Y., along the west side of the Hudson River.

But her devotion was to the round.

She came to what she called her “love affair with the sphere” quite organically. When she was making ceramic pots and vases in the early 1960s, she felt a powerful urge to close their tops.

“I resisted,” she wrote in an essay in Drawing magazine in 1997, “but the rims got tighter and tighter until I gave in, closed the top and looked at my first sphere. I was fascinated by the idea of closed-in space. (In retrospect, I realize I was pregnant at the time.)”

She added, “I loved the sphere’s continuous surface to draw on — no edges, no top and no bottom.” And each material she used, whether cement, copper, sheet metal, wax, plaster or aluminum, “changed the meaning.” Creating the larger ones became a major production, and she became adept at welding.

When she could not move her biggest orbs through the narrow doors of galleries, she cut them up or broke them apart — and realized that she liked the look, and the symbolism, of broken pieces. She sometimes glued or welded them back together, sometimes not, and her spheres were increasingly pockmarked with holes or shards.

“The spheres, whose piecemeal, crinkled surfaces are full of gaps, overlaps and suture-like welds, are gently Cubist in effect,” the New York Times art critic Roberta Smith wrote in 1992.

Ms. Smith noted approvingly that by experimenting with the form, Ms. Knowlton had brought “a new complexity to her essentially Minimalist art.”

Grace Daniels Farrar was born on March 15, 1932, in Buffalo. Her father, Frank Neff Farrar, owned a music store. Her mother, Esther (Norton) Farrar, was a homemaker.

Ms. Farrar graduated from Milton Academy in Massachusetts in 1950 and earned a bachelor’s degree in art from Smith College in 1954. She followed a boyfriend to Washington, where she sold vacuum cleaners door to door before landing a job as an assistant to the curator of graphic arts at the National Gallery of Art. She also studied with Kenneth Noland, the abstract painter, and taught art at the Arlington County public schools in Virginia.

She moved to New York in 1960 and married Winthrop Knowlton, an investment banker who later became president and chairman of the publishing house Harper & Row. The couple settled a few years later in Snedens Landing.

They converted a 19th-century barn into their home, guided by the architect Hugh Hardy, famed for his restorations in Manhattan. They raised two daughters, along with Mr. Knowlton’s three sons from a previous marriage, and Ms. Knowlton immersed herself in art projects.

Early acquisitions of her spheres by the Newark Museum and Storm King Art Center in the Hudson Valley gave a significant lift to her career. When she displayed five concrete orbs, ranging in size from 27 inches to six feet, at a gallery show in New York in 1974, a wealthy arts patron bought them all and gave them to the Newark Museum, which placed them in its sculpture garden.

She and Mr. Knowlton divorced in 1980. Her brief second marriage also ended in divorce.

In addition to her daughter Samantha, Ms. Knowlton is survived by another daughter, Eliza Oursler; her stepsons, Oliver, Christopher and Win Knowlton; six grandchildren; three great-grandchildren; and her brother, John Farrar.

“As time passed, her pearls and silk dresses were swapped for bluejeans and work boots,” Samantha Knowlton said. “Above all else, she was an artist, and art and fellow artists were always at the heart of her world.”

She transformed her property into an artists’ community, converting various rooms and outbuildings into studios where sculptors, painters and potters shared their visions and usually a meal.

“It became more of an artists’ haven and less of a formal home,” her daughter Samantha said in a phone interview. “A bedroom became a darkroom, she stored her art in another. The dining room became a studio.” Spheres covered the landscape. 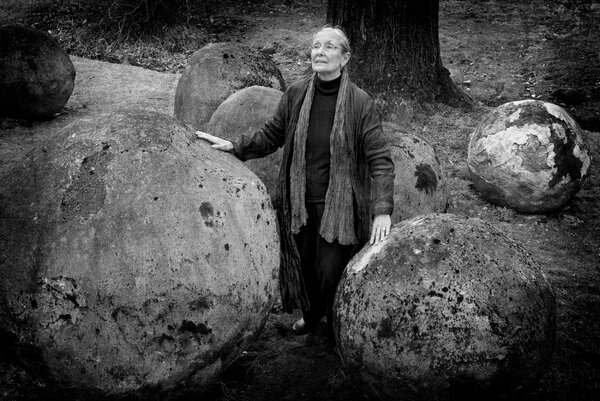 Ms. Knowlton eventually went back to school, earning her master’s in art education from Teachers College at Columbia University in 1981 and expanding her interests in photography, drawing and painting. She taught at the Art Students League of New York from 1998 to 2005.

She also took up “blind” drawing, in which she would look at her model but not at her paper.

“This method brings out the feeling of the line,” she wrote in 2000 in Linea, the Art Students League’s online journal. “I find the resulting drawings surprising, fresh and energetic.”

Like those drawings, much of her work was inseparable from herself. As she put it in an exhibition statement at Hirschl & Adler Modern in 1995:

“My view of myself has changed over the years, from a woman containing a secret, closed womb, full and whole, to a person formed from mismatched parts — broken and repaired — but making up an open and dynamic whole.”