It started to drizzle just moments after the 24-year-old man crossed the finish line of the 2017 New York City Marathon. It was his first marathon, and he felt both elated and exhausted as the medal given for completing the brutal race was draped around his neck. A goody bag containing an energy drink was put in his left hand. It felt strangely heavy. His whole body ached and trembled with fatigue, but somehow that left arm felt even more tired. Unconcerned, he switched the bag to his right hand and went in search of his partner.

Recovery took longer than he expected. It was a day and a half before his legs were strong enough for him to walk down stairs facing forward, rather than the sideways shuffle that his tired muscles insisted on. But by the end of the week he felt mostly normal. Only that left shoulder remained tired, sore and stiff. He went to a nearby walk-in clinic just south of City Hall. The nurse practitioner who examined him thought he had a rotator-cuff injury. She recommended a nonsteroidal anti-inflammatory like ibuprofen, physical therapy and time. The ibuprofen didn’t help much; neither did the physical therapy.

That weekend he headed to the gym — his first workout since the race. He did his usual set of reps on his right biceps and triceps. But when he transferred the 25-pound dumbbell to his left hand, it seemed heavier. He struggled through two curls, but on the third the muscles in his arm turned wobbly. He grabbed the weight with his right hand and lowered it to the ground. By the time he got home, straightening his aching arm was excruciating, as if the muscles were too short to allow a full extension. That scared him.

And it only got worse. The next day his whole arm was achy and tight. He couldn’t even work on his computer.

Thinking back, the young runner questioned the assumption — shared by both him and the nurse practitioner — that the injury had occurred during the race. Now he suspected it started weeks earlier. During one of his 15-mile training runs, just after reaching the top of Central Park and starting the homeward leg, he felt a strange tingle in his left shoulder. It wasn’t painful, just odd — as if he’d somehow lit a sparkler deep inside the joint, right above the shoulder blade. It only lasted a few seconds, and he wouldn’t have thought twice about it if it hadn’t become a frequent event when he ran. By the time he felt ready for the race, the tingle would twang through his shoulder dozens of times, usually in the last leg of a particularly long run. But it hadn’t really hurt, and he never noticed any weakness until the marathon.

Two weeks after the race, the man traveled to Northern California to spend Thanksgiving with his family. His mother, who had had plenty of shoulder problems, sent him to see her orthopedic surgeon. This isn’t a surgical problem, the orthopedist told him flat out. He referred him to a physical therapist. The therapist could see that his shoulder wasn’t working right. When the man raised his arm over his head, his left shoulder blade stuck out as if it had somehow become unmoored. “Winging” was what the therapist called it. But he couldn’t tell him what caused either that or the weakness. 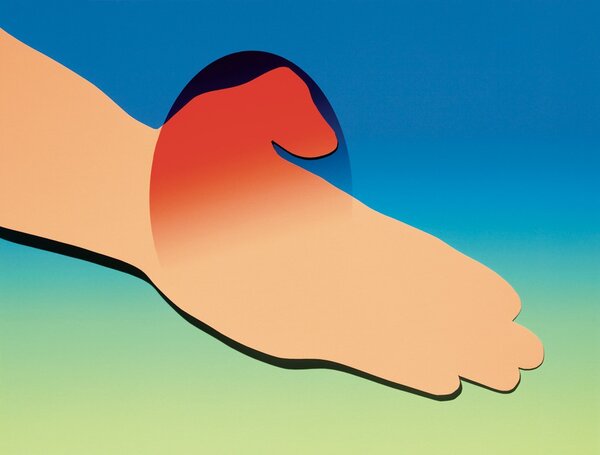 When the man returned to the city, he saw a physiatrist — a specialist in rehabilitative medicine — who took a brief history and sent him to a neurologist to get a study called electromyography (EMG). Weakness and pain in muscles can come from the muscle itself or from the nerves that tell that muscle what to do. The EMG tests the muscle. A slender needle is inserted into one of the muscles of interest. The patient is then instructed to move the muscle in specific ways. The needle measures that muscle’s response and transmits that data to a screen in the form of a wave. The shape and size of the wave reveal how well the muscle responds to the commands of the nerve in charge.

Near the end of the test, Dr. Mark Sivak came in to supervise the resident who was performing it. Sivak glanced over the results. While he would still need to do a formal reading, they looked pretty normal. Whatever was wrong, it wasn’t in the nerves that ran down the arm. He asked the patient about his pain, and the young man repeated his now well-practiced story. The story clicked; right away Sivak suspected he knew just what the problem was.

“May I examine you?” the neurologist asked. The young man agreed, and the doctor began testing his upper-body strength — first on the normal right side, then on the left. The strength was the same in both shoulders raising the arm up and pushing down. The strength in the biceps was also the same, straightening and bending at the elbows. Then Sivak took the man’s right hand, as if shaking hands. Turn inward, he instructed the patient. Now outward. Normal. He did the same on the left. Clearly much weaker. Then he had the young man bend his thumb at the last joint. He put a downward pressure on the nail and instructed the man to straighten his thumb. It was easy on the right. But impossible on the left. “I think I know what’s going on,” Sivak said at last.

The young man had something called Parsonage-Turner syndrome, an inflammation of the nerves of the brachial plexus, the neurologist reported. The brachial plexus is the segment of nerve fibers that connect the spinal cord to the peripheral nerves in the shoulder and arm, the neurologist explained. It starts with pain — usually severe pain — and progresses to weakness and muscle wasting. Left alone it usually resolves, but the process can take years. However, the doctor added, some research suggests that a five-day course of high-dose steroids early on can hasten healing. He had cared for patients with this before and often saw improvement after even a single dose of the drug. He recommended starting the steroids as soon as possible.

Parsonage-Turner syndrome, also called acute brachial neuritis, was first described more than a century ago by a physician in Germany. It is named for two British neurologists, Maurice Parsonage and John Turner, who published a description of 136 cases of the disorder in 1948. In these cases, pain and weakness came on days to weeks after some kind of trauma, usually an infection or surgery. In the decades since then, the syndrome has usually been described as rare, but a study published just a few years ago suggested that it is far more common than previously thought — just frequently missed.

The patient reluctantly agreed to get the treatment. He normally took no medications and wasn’t eager to start any, but the idea of years of pain was even more unappealing. When the patient went in for the second infusion, Sivak came by to see him. How was he feeling? Any better? Any stronger? The athlete shook his head; no change. The neurologist took the young man’s hands and again tried the strength of his two thumbs. On the left, where the patient had been immobilized by the pressure of the doctor’s push, he was now able to straighten the joint. It still wasn’t as strong as the right thumb, but it was better.

Once he completed the steroids, he started physical therapy again. Slowly his arm and shoulder became more limber and regained their former strength. I spoke with the patient three months after his treatment, and he told me that he was 90 percent there. A few months later, he reported that he was back to his old strength, his old self.

I spoke with the patient again recently. His shoulder and arm are fine. He still does the stretching exercises that he was taught in physical therapy two years ago and feels as if the pain and weakness creep back if he stops. But he’s back at the gym, lifting weights without any problems. He hasn’t tried another marathon. He wonders if he somehow trained incorrectly and injured his nerve in the process. He loved running that marathon but figures it didn’t love him back. These days he has taken up biking. And, he says, it’s almost as good.