GWANGJU, South Korea — One warm February morning, the curator Defne Ayas bounded up a steep, sylvan path toward a cemetery in this city of 1.5 million as she discussed shamanic practices, resistance movements and other aspects of the area’s history that are themes in the art exhibition she was finalizing nearby.

“It’s been a long journey,” Ayas said, as she caught her breath. Factoring in coronavirus-induced postponements, she and her co-artistic director, Natasha Ginwala, have been developing their edition of the Gwangju Biennale for more than two years.

Originally scheduled to open last September, and then in February, “Minds Rising, Spirits Tuning” is now on tap for April 1. The most closely watched art biennial in Asia, the exhibition has been integral to South Korea’s efforts to boost its contemporary art scene. Next week, its curators will be back in Berlin, where they are based. (Ginwala is an associate curator at the Gropius Bau museum; Ayas, a curator-at-large for the V-A-C Foundation, of Moscow and Venice.) Each spent two weeks in quarantine after flying into South Korea to prep the show. It will close after a mere 39 days, on May 9 — about half its intended duration. The Venice Biennale, in contrast, runs for seven luxurious months.

But as other international exhibitions have opted for longer delays, Ginwala and Ayas have plowed ahead, buoyed by South Korea’s comparatively successful management of the pandemic, which has allowed art fairs and exhibitions to open during periods of eased social distancing. The curators wanted “to set an example of doing things in a way that sustains and responds to this moment,” Ginwala said, sitting behind a plastic barrier in a biennial office. 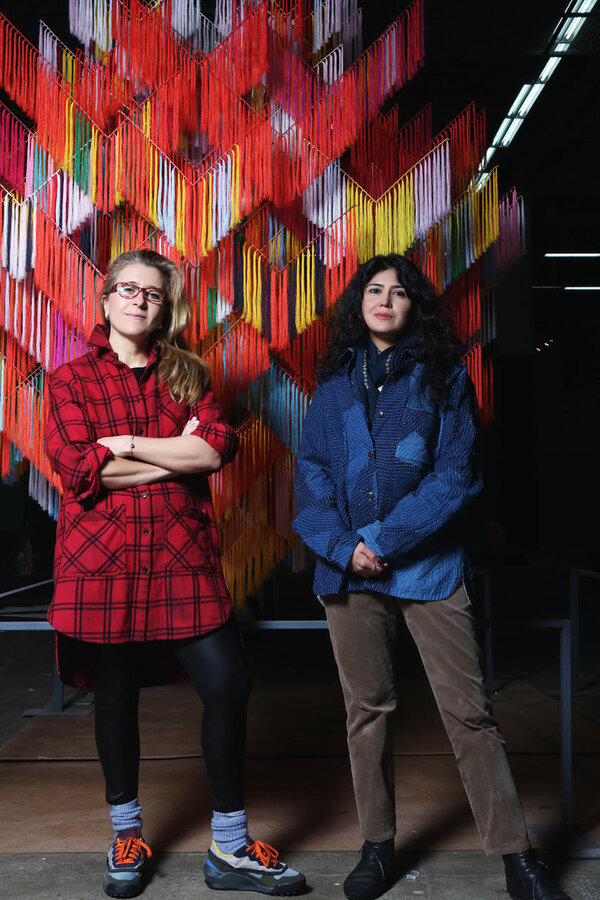 Over the past few decades, biennials have been arenas for networking, as curators, collectors, dealers and artists descended on far-flung cities to share information and cut deals. Gwangju’s show now attracts a fraction of the 1.6 million who attended the first one, in 1995, but “it has become one of the more prominent destinations on the biennale circuit,” Joan Kee, an art history professor at the University of Michigan, said.

Over the years, the biennial has hired top-flight curators like Massimiliano Gioni, the New Museum’s artistic director, and Okwui Enwezor, who died in 2019. The show has “played a role in the appreciation by the global art world of what Korea has to offer in terms of artists, galleries, nonprofits and institutions,” said Pat Lee, a director at Gallery Hyundai in Seoul, about two hours north by high-speed train.

Attendees at Gioni’s 2010 edition recalled alighting at Jayu (“Freedom”), a since-closed dance hall that billed itself as the largest club in Asia, according to Lee (who helped plan the party), with “many surreal things like opening rooftops, cascading bubbles, DJ platforms coming down from the roof.” It was a pretty good night out in the country’s sixth-largest city.

The 2021 outing will, inevitably, be a more low-key affair.

Of the 69 artists and groups selected to fill four venues, only three braved the quarantine to install on site. (Eight are based in Korea.) It is a wildly eclectic bunch. Ayas said that she and Ginwala looked for art that embodies forms of intelligence, “from the heart, from streams of consciousness that are ancestral, that are cosmological” — and that takes up issues like artificial intelligence and “collective modes of solidarity that you might find in Indigenous contexts or in matriarchal cultures.”

One team that made the trek was the Paris-based vanguard choreography duo known as EightOS (∞OS), Dmitry Paranyushkin and Koo Des. “Right now, it’s very difficult to work with groups, it’s almost not allowed, and here we have this opportunity, so of course, we jumped at it,” the Moscow-born Paranyushkin said, midway through his quarantine at a Seoul hotel.

EightOS — a “body-mind operating system,” in his words — involves performers wearing headsets that vibrate to indicate if they are moving in a way that suggests the fractal geometry found in many organic forms. Paranyushkin had been using the device to exercise in his room a few hours every day, he said. “It’s a way to reconnect to nature.”

The curators planned for EightOS to help organize a dance at the biennial’s sprawling exhibition hall with local children, samul nori drummers, sculptures that artist Sangdon Kim built atop shopping carts and a sutra reading from Jeong Kwan, a renowned Buddhist nun and chef whose monastery is in the region.

“The biennale is almost set up now as a television studio where the procession is being recorded,” Ayas said. The reality was that most viewers — and most of the artists — will only experience the exhibition online.

Some participants, at least, were able to visit Gwangju with the curators to research their works before intercontinental journeys became difficult.

The Colombian Ana María Millán met with live-action role players and a feminist gaming group called Famerz to develop characters and a scenario for an off-the-wall video game that is playable on-site, but the artist will sit out the biennial in Berlin. “The protagonists, they belong also to the virtual worlds,” she said, “so I am enjoying playing the game at home.”

Sylbee Kim, who works between Berlin and Seoul, filmed scenes for a poetic audiovisual installation that follows a sci-fi band of wanderers before heading back to Germany. Kim returned to South Korea this month. She was a student in Seoul when she first went to the biennial, which was founded as a response to the 1980 Gwangju Uprising — “what is sometimes referred to as Korea’s Tiananmen,” Kee said. Demonstrators rose up against a military dictatorship, which killed many of them. The events are still fiercely contested.

Political liberalization starting in the late 1980s gradually led to greater awareness of the censored incident. But “it took decades until the democratic movement gained importance through revised historical views,” Kim said.

“The biennial is really a way to reconcile with this traumatic past, when the government” attacked its own citizens, Ayas said. “Every two years there’s that remembrance moment.” That mission, commemorating a failed fight against martial law, has a bracing resonance amid the Myanmar military’s recent shooting of protesters and Thailand’s crackdown on pro-democracy activists.

“The first edition of the Biennale invited artists whose work (both literary and artistic) was candidly in opposition to the military regime,” the Korean painter Min Joung-ki, who participated in 1995, said in an email. This time, Min’s contributions include tranquil, radiant landscape paintings, rich with historical allusions.

The show’s oppositional spirit endures in the unsparing paintings of Sangho Lee, a South Korean artist imprisoned because of his art during the waning days of the dictatorship. In one work in the biennial, Lee has depicted supporters of the Japanese occupation of Korea from 1910 through World War II, their hands tied, awaiting trials that did not occur.

The Thai artist Korakrit Arunanondchai incorporated footage of recent demonstrations in Bangkok into a moving video that touches on the death of his grandfather, ghosts and a mass grave on Jeju, an island south of the Korean Peninsula where government forces killed an estimated 30,000 people they branded as Communist agitators beginning in 1948.

The 2021 biennial asks how art can address trauma and rewrite official narratives. At a time of ethnonationalism and authoritarianism, Ginwala said, she and Ayas have been interested in “what a collective approach to building society can mean.”

Such an approach has also been required to create some artworks for the exhibition with their creators stuck elsewhere. From Thailand, Arunanondchai remotely directed a camera team on Jeju. “I need to be there to feel the air and find the story,” he said of his usual method. “It was quite hard.”

The New York-based artist Cecilia Vicuña had intended to perform in Gwangju, the latest milestone in a meteoric late-career rise. But the Chilean-born artist, 73, opted to stay home. “Now I hardly even go uptown or anywhere,” she said from TriBeCa.

Vicuña was glad to be working, though. She wrote a poem honoring the Korean-American writer Theresa Hak Kyung Cha, who was raped and murdered in New York in 1982, and recorded it with the composer Ricardo Gallo. It will be played in a park outside the Gwangju National Museum. She also sent charismatic paintings of revolutionaries and thinkers like Camilo Torres Restrepo (1929-1966), the Colombian Roman Catholic priest and guerrilla fighter.

Other artists embraced virtual formats. Working in Los Angeles, the Lithuanian performer Kira Nova recorded playful videos that offer a creation story, starring herself as a kind of maniacal, freethinking aerobics instructor. They live on the biennial’s website, where the artistic directors have also been posting myriad discussions. “A state of mind of the idiot is what I am proposing for these days, as a solution,” Nova said of her unconventional philosophy.

Scattered around the world, the artists of “Minds Rising, Spirits Tuning” may never actually get to meet, but in Gwangju their work has formed a layered, and action-packed, show. As it was nearing completion, artists and organizers convened in a snaking line for the big dance that Ayas had mentioned. The procession moved, percussionists loudly sounding their instruments, children in uniforms swaying their arms and EightOS dancers maneuvering around them. Videographers swooped about, capturing it all.

After a break, about 20 people involved in the show assembled on pillows for a tea ceremony presided over by Kwan, the Buddhist nun, in the cavernous, silent exhibition hall. She said that she wanted those listening to be able to relax after their work and difficulties.

Through a translator, Kwan said she hoped her audience would think about “How am I going to live in the future?” That could be a motto for this hard-won biennial, which is now awaiting viewers who might be grappling with just that question.