Ry Russo-Young was 9 years old the first time she told this story, for an audience of one: the psychiatrist appointed to her case. Russo-Young is the younger daughter of Sandra Russo and Robin Young. In 1991, Thomas Steel, the man who had donated the sperm for Russo-Young’s conception, sued her mothers for standing as her father and for immediate visitation.

In the room with the psychiatrist, Russo-Young had to tell the story of her family and the story to herself. The story had to be clear, it had to be credible. It is a story she has been trying to tell — through multimedia projects, through independent films, through mainstream teen movies — ever since.

She tells it again in “Nuclear Family,” a three-part documentary that premieres on HBO on Sunday, with subsequent episodes airing weekly. Russo-Young excavates her family history with the help of home movies, archived photos and extensive interviews with her mothers and her sister, Cade Russo-Young. Though Steel died in 1998, she speaks to his friends and to the son of his partner in an attempt to understand his version.

“It feels like this is my first film,” Russo-Young said during a recent video call. “Or all the films I’ve been making in my whole life have led up to this film.”

Russo-Young is 39 now. She lives in Los Angeles with her husband, Colin Spoelman, and their two young sons. She has big features, a broad smile and long brown hair cut into blunt bangs. She used to favor a tough, femme rockabilly style, but on the call she wore a loose blue button-up and little makeup, mid-pandemic mom chic

In conversation, she thrums with empathy and preternatural insight, accessing the same vulnerability she brings to her creative work. Her Twitter bio reads, “Movie director often moved to tears,” and she did cry at least once during the hourlong chat.

“It’s OK,” she said, speaking from her airy home office. “It’s part of the process.”

While she never minimized the seriousness of what happened to her and her family, 30 years later she wears it lightly. “In terms of the awful things that happen to children, I was pretty lucky,” she said. 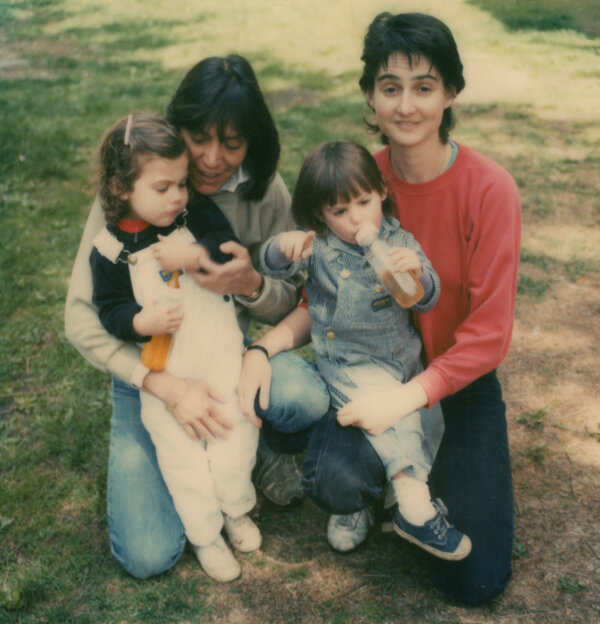 Russo-Young was born in 1981, in the first generation of children raised by openly gay and lesbian parents. Her sister, born the year before, was conceived with sperm obtained from another donor. When the girls were young, Steel sometimes vacationed with the family, as did her sister’s donor, until those relationships ruptured. Steel sued, losing the initial judgment, then winning on appeal to the State Supreme Court.

“It’s a win for all of us — not just me,” he told a reporter at the time. “It merely adds to the complement of people who are loving of and involved with Ry.” But to Russo-Young, a dreamy child who loved dress-up and imaginative play, the suit didn’t feel like love. It felt, she said, like an intense threat. Steel never enforced his visitation right and he and Russo spoke only once more before he died.

The case had persisted for more than three years, beginning when Russo-Young was 9, ending when she was 13. These were the same years that she discovered cameras — first a Polaroid, then a Pentax, then a camcorder. She began chronicling her family and friends obsessively.

“It was a real appendage,” Russo said during a joint video call with Young. “She took her camera everywhere and took photos and movies everywhere.”

From the beginning, Russo-Young saw those images as a way to understand herself and her world. “It’s always been a process of self-exploration,” she said. “I realized that if I photographed something, I could look at it later, and have perspective on it.” She includes several of those early videos in “Nuclear Family,” as well as videos that Steel and his partner shot during visits.

At Oberlin, she learned the language of experimental cinema, and she began to apply it to her family’s story, first in a piece called “The Middle Ground,” in which she used the lens of a fairy tale and dressed herself and her mothers in red riding capes.

That project continued, through indie films like “Orphans” and “Nobody Walks,” and into the teen dramas “Before I Fall” and “The Sun Is Also a Star.” Russo-Young never addressed her own family directly, but certain themes — the preciousness and precariousness of life, the power and fragility of love — shine through those movies like golden thread.

It isn’t an accident that Russo-Young, whose résumé also includes episodes of the series “Cloak & Dagger” and “Panic,” often tells teen’s stories. She was a teenager by the time the court case finished, and she knows to treat adolescents and their problems with the gravity they deserve. The questions that teenagers ask — Who am I? Why am I here? Whom do I love? Who loves me? — are the same questions she had to answer, for herself and for the courts, when she was very young. They are the same ones she still asks.

Russo-Young tried to make versions of “Nuclear Family” before, first as a fiction film, then as a documentary and fiction hybrid. But those versions never felt right. She still didn’t know her own story. Or Steel’s.

Then she became a mother herself, a reorientation that offered her new insight into her mothers’ and Steel’s actions. She also felt as if she finally had the tools as a filmmaker to do right by it.

And she realized that she didn’t need to know all the answers, at least not at the beginning. “The form of the documentary itself would reveal the answers,” she said. “That was the reason I was making the film.”

Still, she hesitated, largely because the autobiographical documentary, a genre that A.O. Scott, writing in The New York Times, has playfully titled “Narci-cinema,” suggests a certain solipsism. Russo-Young admired the best examples of the genre — like Sarah Polley’s “Stories We Tell” or Ross McElwee’s “Sherman’s March” — but she didn’t want to make what she calls “a me-and-my-problems movie.”

Ultimately, she had to trust that the story of her family was worth telling, that it might help audiences better understand their own families. “I had to have faith that what I was doing would matter to other people,” she said.

The three-hour documentary is both investigative and impressionistic, closest in spirit perhaps to Polley’s film, but also something like Jonathan Caouette’s “Tarnation” in its layering of found footage. Though Russo-Young long resisted putting herself in the frame, the episodes, which move roughly chronologically, are less about establishing the facts of the case and more about discovering what those experience meant and mean, an archaeological dig into her own heart.

But making the movie also meant hurting the people she loves most, her mothers and her sister, asking them to relive, in exacting detail, perhaps the worst and most anxious years of their lives.

“Some of it was awful,” Russo said, speaking of shooting the film.

“Awful,” Young echoed. “We would be up all night, re-litigating the case, almost like PTSD or something, just going through it again.”

But Russo-Young’s mothers, who still live in the Greenwich Village loft where Russo-Young grew up, also said how much they enjoyed spending time with her — even fraught time — when she would fly in for filming. And they appreciated how she put them at ease.

“She’s very good at what she does,” Young said. “She’s a very warm, sweet person. And she’s our kid.”

Still, certain conversations were hard, especially one in the third episode, in which Russo-Young tries to reconcile what she has learned with the narrative that her mothers have always insisted on. The experience hasn’t changed her mothers’ minds, but they do feel that they understand their daughter better.

“We got closer,” Russo said. “There was always some little area of friction that we didn’t quite address. She was always feeling she had to protect us.”

Young acknowledged that the movie Russo-Young made is not the movie they would have made. But she accepts that. And mostly she feels pride.

“It felt like a love letter to us and Cade, and what could make parents happier?” she said.

Having sent this love letter out to HBO subscribers, one could imagine that “Nuclear Family” would enable Russo-Young to move onto other narratives and themes. It hasn’t — she hopes to adapt what happened to her family into a dramatic limited series. But it has freed her in other ways. Making “Nuclear Family” helped her to work through her own history and what she calls her own “mishegoss,” a Yiddish word for craziness.

“Now that I have let that go,” she said, “I can actually be more free.”