Jeremy O. Harris is a playwright, a performer, and a provocateur. And now, he’s a philanthropist.

The 31-year-old author of “Slave Play,” which is nominated for 12 Tony Awards, emerged during the pandemic not only as a vocal advocate for the beleaguered theater industry, but also as someone determined to model generosity.

After years in which he earned very little making theater — he said his total commissions over four years amounted to about $22,000 — this year he made nearly $1 million, primarily from collaborations with the fashion industry and an HBO deal. (Fashion and television pay better than Broadway.)

So in the months since the virus shuttered theaters across America, Harris has:

Helped produce streamed versions of the plays “Heroes of the Fourth Turning” and “Circle Jerk,” using a portion of the $250,000 annual theater production fund HBO gave him when he signed a development deal.

Donated a collection of plays by Black writers to one library in each of the 50 states, plus Washington, D.C., Puerto Rico, and Guam.

Pledged fees and royalties from “Slave Play” to fund $500 microgrants, administered by the Bushwick Starr theater, to 152 U.S.-based playwrights, and gave proceeds from the “Heroes” production to a Playwrights Horizons relief fund for theater artists.

He has also used his bully pulpit to champion theater. He sent a letter to President-elect Biden, urging him to revive the Federal Theater Project, and then used an appearance on “Late Night with Seth Meyers” to push that show’s host to rally support for the idea.

In a telephone interview, Harris explained why in dire times he believes everyone should be committed to “protecting, uplifting and sharing,” adding: “Some might call it philanthropy, but I call it upkeep or maintenance.” These are edited excerpts from the conversation.

How would you describe the kinds of artists or works you’re looking to support?

I want to make sure that we have a really fertile artistic landscape when we return to the theaters. And I think it’s been pretty evident that I’m really excited about work that’s challenging, that’s scary, that probably wouldn’t get support otherwise. 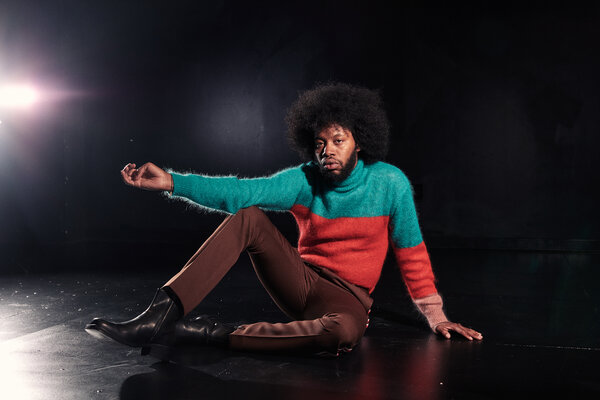 I’m focusing on playwrights because that’s the small sandbox that I feel like I can afford to focus on, and I’m hoping that other people will make sandboxes for other people in the community.

The library initiative is named for your grandfather, Golden, and the commissioning program for him and his wife, Ruth.

I was raised by my mom, but my grandma, Ruth, and my papa, Golden, took care of me a lot. My papa had to start working when he was 12 or 13, so he had a complicated relationship to literacy, and yet he was such a great advocate for me as a young reader. We’d go to the Rock House, [a convenience store] and I’d get two hot dogs with mustard, ketchup and chili, and a book. He died right before “Slave Play” got moved from the Belasco Theater to the Golden Theater, and that felt magical. In that moment, I was like, “Is papa doing this?”

Even before the tumult of this year, you’ve had an interest in highlighting Black theater artists.

The structures of inequality that privilege whiteness have been a part of my understanding of the world for such a long time, because I grew up really desirous of knowing more people who did the things that I was interested in — like writing plays, like acting in plays, like writing books — who also looked like me.

It was so exciting to see myself in Tennessee Williams, in Beckett and Caryl Churchill. But there came a point where I was like, “Wait, have Black people never done anything like this?” And when I discovered that not only had they, but so many had done it to wild acclaim, and yet no one I talked to remembered that acclaim or knew those people, I knew that something had to be done about this cultural amnesia.

Do you think of yourself as wealthy, or how are you making all this happen?

I’m not so deluded as to say something like “The money I made this year is inconsequential money." It’s a great deal of money. But I also know that amongst the elites of the New York theatrical community, my bank account pales in comparison. The fact that I made just under a million dollars this year after literally making no actual income for a decade feels like a really complicated thing for me to make sense of. I don’t know if this money will be the only money I make for the next two years — I don’t know what the decade will bring for me. But I felt no qualms about giving this much of it away, because it is more money than I ever imagined I would make, and it’s also more money than I need. And so it feels imperative for me to work and imagine new ways to take care of the people around me.

The $50,000 commissions are above the norm for playwrights. How did you arrive at that amount?

I wanted to give someone a living wage in New York. I wanted someone to feel excited about spending a year and a half, maybe two, working on one play, and not feeling compelled to work in a coffee shop or to write in a [television] writers’ room.

How well do you think the theater industry is doing at making a case for the art form during this crisis?

Obviously, theater is not on its last legs. Theater is this amazing mutating beast that doesn’t hide when things get tough. It can roll with the punches. And the mutability of theater as a form is why there have been huge successes, like “Circle Jerk,” in my opinion, and also some really amazing failures. There also will be experiments where you’ll be like, “I never want to see that again. That’s an abomination that should not exist.”

Do you think of yourself as heroic?

No. I would never say that about myself. For me it’s not heroic — it feels like the obvious thing that a young artist without much to lose should be doing for their community.