Ask David S. Goyer, the creator of “Foundation,” why Jared Harris was his first choice to star in this ambitious new Apple TV+ series, and he will point to one small, meaningful moment during filming.

“Foundation” has been a cornerstone science-fiction text ever since Isaac Asimov wrote the series’s first stories in the 1940s. Harris plays Hari Seldon, one of the genre’s best-known characters: a mercurial and remote mastermind, seen mostly through others’ eyes. It’s a tricky part to write and even trickier to act. “By his very nature, Hari has to remain elusive,” Goyer said. But he is also the story’s “emotional and intellectual glue.”

So at the end of a scene in which Hari details apocalyptic prophecies, Goyer asked the episode’s director to keep rolling after Harris finished his lines. “Even though he’s not saying it verbally, I wanted to feel the tremendous weight on the shoulders of this person,” Goyer recalled. They extended the scene long enough for Harris, still in character, to slump back and sigh, quietly conveying who Hari really is when no one’s watching.

It was a subtle, intuitive gesture that made a man known in “Foundation” as “the smartest in the galaxy” feel more like a real person. Talk to just about anyone who has worked with Harris, and they’ll tell similar stories about his small moments of actorly grace and his attention to the tiniest details of his characters. 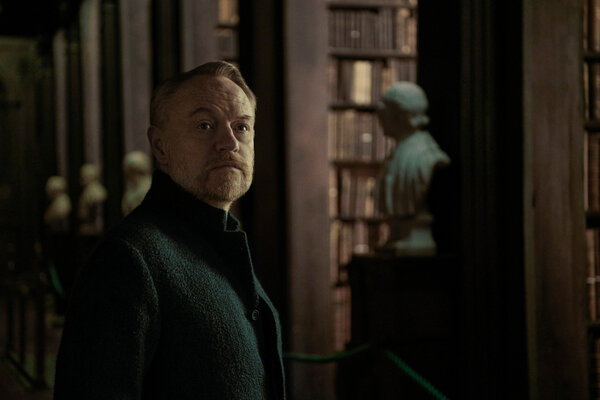 Naren Shankar, a writer and producer on the science-fiction series “The Expanse,” said that Harris had built a lot of his charismatic, rabble-rousing character in that series, Anderson Dawes, around the tattoos Anderson sports, working with the writers to understand the whole history behind the ink. The “Mad Men” creator Matthew Weiner described how Harris once set the tone for an entire scene just by adjusting his tie after his character Lane Pryce emerged from a night of drinking and carousing — an unscripted gesture that spoke volumes about a man trying to reassert his dignity at an undignified moment.

Over and over, he is described as an actor who prepares diligently, poses challenging questions to his collaborators and consistently brings a fragile, relatable humanity to some dark, heavy material.

Harris, 60, has been very busy over the past five years, anchoring complex dramas like “The Terror” and “Chernobyl” while also taking on smaller roles in ensemble-driven series like “The Expanse,” “The Crown” and “Carnival Row.” At this point in his career, he said in a recent video call, he looks for projects where the writing is good, and where the creative team is open to collaboration.

“I always ask that question of the person when I’m talking to them, in the early stages of whether I’m going to come on board or not,” he said. “What kind of a relationship do they want with the actor?”

Harris was calling from Pennsylvania Amish country, where he was shooting a movie. (When he’s not working, he splits his time between Los Angeles and New York City with his wife, Allegra Riggio.) In conversation, he is as those who’ve worked with him have suggested: full of ideas, and inclined to throw questions back at the person he’s talking to, to go deeper into the subject.

It’s a process that TV writers like Goyer, Weiner and Shankar especially appreciate because making a television takes a long time, and it helps to have actors who are committed to making every scene feel more alive. Harris described the way he works with writers and directors as “developing how you’re going to arrive at where they want their story to arrive at.”

“You’re not changing the story,” he said. “But you might be coming up with different routes in.”

After spending the first 20 years of his career playing mostly character parts in indie films like “I Shot Andy Warhol” and “Happiness,” Harris was nearing his 50th birthday when he joined “Mad Men,” in a role that turned out to be his belated breakthrough. It was his three-season stint as Lane Pryce, a buttoned-up British financial officer who takes big chances when he joins a New York ad agency, that finally allowed Harris to emerge from the long shadow of his father, Richard Harris, one of the most revered actors of the 20th century.

Weiner saw the parallels between Lane and Harris: a respectable but perhaps overlooked pro’s pro, invigorated by an opportunity to reinvent himself in America.

“He’s had a very interesting life,” Weiner said of Harris. “He knows who he is, and he knew who Lane was.”

Similarly, in the AMC horror anthology “The Terror” — which Harris rates alongside “Mad Men” and “Chernobyl” as his best work — he played a morose naval officer who rediscovers his will to survive on an arctic expedition gone awry. David Kajganich, a writer-producer that season, described this rare leading role for Harris as a part that resonated with the actor’s own experience: “A man who had proven himself as a sailor time and again but had never been given full command of an expedition.”

It was never a given that Harris was going to go into the family business. The son of Richard Harris and the actress Elizabeth Rees-Williams — and, briefly, the stepson of the actor Rex Harrison, to whom his mother was married for a few years in the early 1970s — he grew up as a shy kid, whose parents urged him to consider a career as an educator or a lawyer.

Neither of those jobs appealed to him. Looking at colleges, he knew only that he “just wanted to get out of England for a while,” he said.

“I wanted to go somewhere where nobody knew anything about me or my family,” he continued, “and I could start to figure out who I was.”

He landed at Duke University, in North Carolina. (Savoring the irony, Harris noted that, as a foreigner, this “white English guy” counted toward the college’s diversity quota.) There, he found his way to the theater department and discovered his calling when he was cast in the play “A Murder Is Announced,” based on the Agatha Christie novel.

“I loved the adrenaline rush,” he said. “I loved the fear. I loved the camaraderie. I loved the way you had to quickly get to know each other. All of those sort of restrictive rules that we put up around ourselves — specifically as English people — they all had to disappear fast.”

That “we’re all in this together” energy is still a part of what draws Harris to his job. Lee Pace, who plays a galactic emperor in “Foundation,” said that even though he and Harris appeared together only in the show’s first episode, they ate dinner regularly and compared notes.

“There’s a science to Jared’s work.” Pace said. “I come from theater, so that time around the table is invaluable to me, where you just say everything that’s on your mind and hear other smart people respond.”

Given that Harris’s father, who died in 2002, was as notorious for his booze-fueled mischief as he was for giving riveting performances, it might sound strange to say that the two men share a work ethic. But while Harris acknowledged that the stories about the actors of his dad’s hard-drinking generation were mostly true, he also insisted that they played up that image as a way of generating publicity.

“The thing is, all those guys, they all took their careers very seriously,” Harris said. To some extent, his father fed that image, he added, “to the detriment of his reputation as an actor.”

Sometimes the children of celebrities bristle at any mention of their family connections; but bring up Richard Harris, and his son’s face brightens. (And make the mistake of referring to Richard Harris, a proud Irishman, as being part of the great tradition of English theater, and you can expect a playful rebuke: “Not English! Them’s fightin’ words.”)

Harris takes pride in his connection to that theatrical legacy — not only that of his father but also that of Peter O’Toole, Laurence Olivier, Richard Burton and the rest.

“I grew up admiring them as sort of distant mentors that you look up to, trying to figure out how they did it,” he said. “But I was also very attracted to the American tradition, watching Montgomery Clift and James Dean and Brando, Hackman and Hoffman and Pacino and De Niro. Always looking for how they do it. How does Robert Duvall do that?”

It took a lot of convincing to get Harris’s parents to come see him act when he was at Duke. “To be honest, none of them really had any expectations, hopes or confidence really that I would do anything other than stink the stage up,” he said. His father finally gave in and came down to see him, post-graduation, in the play “Entertaining Mr. Sloane.”

“I remember so clearly hearing the first laugh I got from him in the audience, in the first five minutes,” Harris said. “He was really surprised and thrilled.”

They went out to eat that night, with Richard Harris suddenly eager to share tips and anecdotes, peer-to-peer. “I never tired of him describing performances that he’d seen,” Jared Harris said. “Olivier’s Coriolanus and his famous death scene. Paul Scofield’s Hamlet. He would re-enact these performances and discuss why this person did this at this moment.”

What Harris got out of those conversations was an understanding that even an actor’s smallest gesture can help “shape the world” of the character.

In “Foundation,” that emphasis on the finer shading was crucial because he was playing someone who can’t reveal everything he knows. (This air of mystery extends to talking about the series itself, which has multiple twists the actors and writers can’t discuss yet.)

“You’re playing somebody who holds his cards close to his chest,” Harris said. “And that’s fun because having a secret is a very important, useful thing as an actor. Even if you’re playing the post man, or the man who’s delivering milk, being able to infer to an audience the existence of an inner life is one of the main things that you have to be able to get across.”

Sometimes Harris’s preparation can be subtle, as in his performance as Gen. Ulysses S. Grant in the movie “Lincoln,” for which he latched onto a historical tidbit about the general and always kept a cigar stub in the pocket of his costume. And sometimes his deep understanding of the material produces poetry, as in a “Mad Men” scene when Lane Pryce seals his own doom by forging a signature and then dries the ink by flapping the paper in the air — as if, according to Weiner, he were “waving goodbye.”

Asked to define the particular quality that Harris brings to a project, different collaborators have different answers. Weiner spoke of how Harris can be at once “non-sentimental” and “emotional.”

“When the character gets into their emotions, not only is it with great difficulty, but it’s like they can’t hold it anymore and they’re regretting it while they’re sharing it,” he said. “It’s just very painful and very deep.”

Harris, though, doesn’t think he has any particular note that he plays more perfectly than any other. “I try to throw them off the track, all the time,” he said.

“Brando talks about acting as inviting the audience to follow you as though you’re walking through the back alleys of a city,” he added. “You take unpredictable left and right turns and try and shake them off.

“Then you let them catch back up with you again.”