John Legend would be the first to tell you that he and wife Chrissy Teigen have come a long way since the early days of their relationship. In fact, that’s just what he discussed in a recent interview. The “All of Me” singer opened up about how “selfish” he was when he and Teigen initially started dating, and revealed that he’s gone through a lot of emotional growth in order to become a better partner.

During his appearance on the podcast On Purpose with Jay Shetty, Legend observed that he was “more selfish then,” referencing the beginning of his relationship with Teigen. “I wasn’t a great partner at the beginning of our relationship. Even though I was very into her and very excited to be with her, I was still selfish. I was in my mid 20s — still not ready to fully be the committed partner that I am now.” The couple met in 2006 on the set of the Legend’s music video for his song “Stereo.”

After roughly five years of dating, Legend and Teigen got engaged and eventually married in September 2013. Legend revealed in the interview it took a lot of internal work in order to become the spouse he is today. “Once you really figure out that you love someone and you really love so much about them and you really want to make it work with that person, like you have to decide, I’m going to do the things that I need to do to be a good partner in this relationship,” he said.

“I’ve just grown as a person because of that, too. Because, when you stop being so selfish, when you think about not only the joy you get from a situation and the pleasure you get from it, but also think about your responsibility and your commitment in that situation, I think you just grow, and you mature. I think part of it is it’s just a matter of time. You need time to become that person you want to be.”

Legend and Teigen, who share daughter Luna, 6, son Miles, 4, late son Jack, whom they lost in September 2020, are expecting a new addition to their family in the months ahead, often share anecdotes about their life together and how much their marriage has changed over time. This couple has clearly grown so much together, and it’s refreshing to hear Legend reflect on how he fell short as a partner when he and Teigen first started dating. We’re excited to see what the future holds for this Hollywood couple.

Before you go, click here to see the longest celebrity marriages. 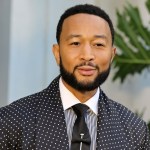