“They’re not just four votes! For many of us, they’re the physical manifestation of generations of blood, sweat, and tears for representation in Congress.” 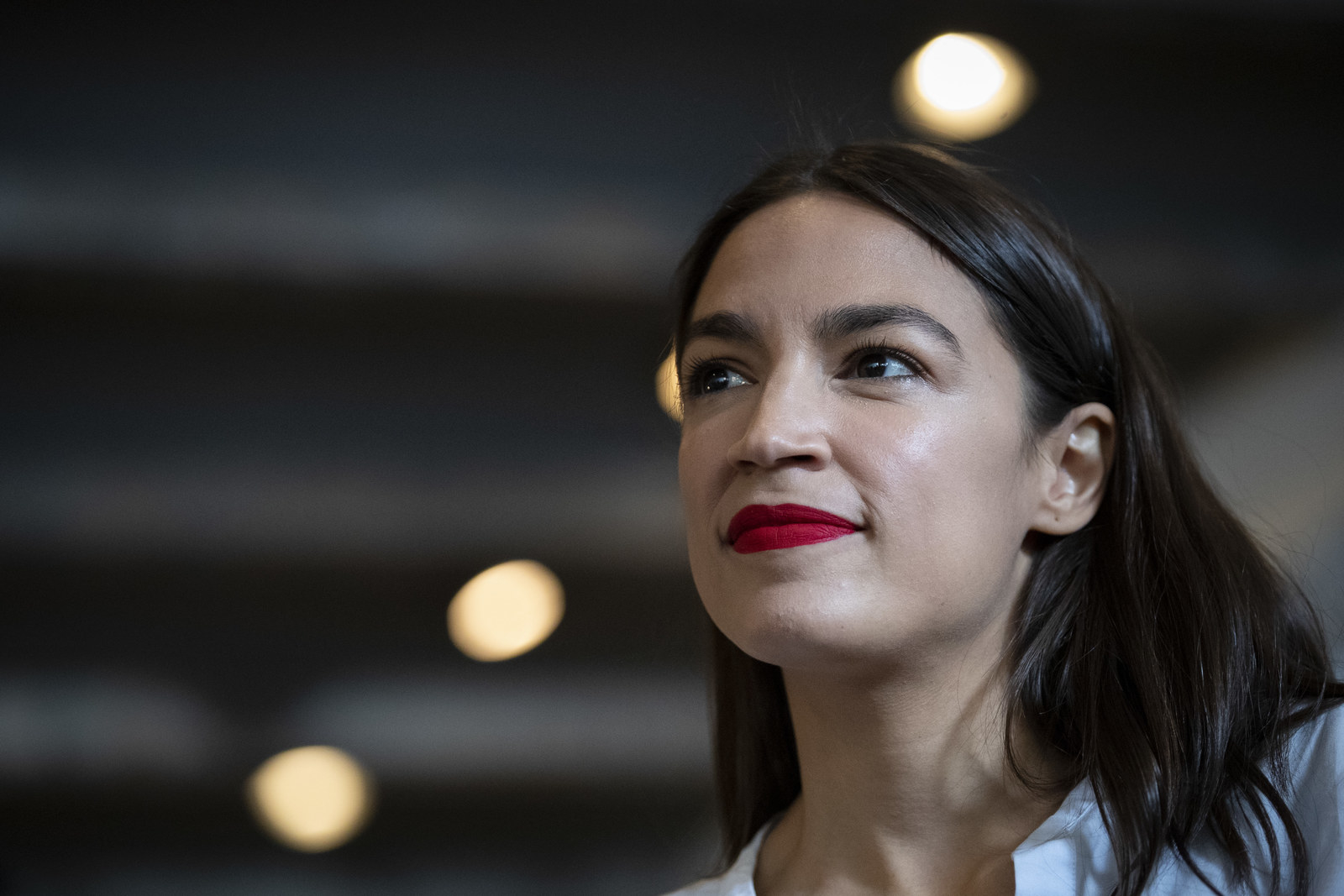 PHILADELPHIA — Progressive activists are tired of the spiraling fight between Democrats in Washington and are lashing out at House leaders for taking on Rep. Alexandria Ocasio-Cortez and other new women of color in Congress.

“We didn’t just send them to Congress to have a symbolic seat at the table,” Aimee Allison, the founder of She The People, told BuzzFeed News at Netroots Nation, a progressive conference where over 3,000 activists gathered in Philadelphia this weekend. “We sent them there to govern with our interests in mind.”

Last week, House Speaker Nancy Pelosi chided members of her caucus for tweeting complaints about other members, seemingly referring to Ocasio-Cortez and other new progressive members and their staffs who have vented about more moderate Democrats. But late Friday, the verified Twitter account of the House Democratic Caucus tweeted out a screenshot of a tweet from Ocasio-Cortez’s chief of staff accusing him of singling out a woman of color and instructing him to “Keep👏🏽Her👏🏽Name👏🏽Out👏🏽Of👏🏽Your👏🏽Mouth.”

That tweet — alongside reported comments from an anonymous Democratic aide accusing Ocasio-Cortez of “only [being] a woman of color when it’s convenient” saying that she’s a “puppet,” alongside a photo of a puppet Goomba, a brown mushroom character from Super Mario Bros. — have escalated a weeks-long fight that progressives see as a heavy-handed attack from the establishment on a group of women of color, who they believe are the future of the Democratic Party.

The fight between establishment Democrats and the group of progressive freshmen — specifically Reps. Ocasio-Cortez, Ayanna Pressley, Ilhan Omar, and Rashida Tlaib — stems from criticism from progressives after a House border funding bill, which included more protections for migrant children, was blocked by moderate Democrats and the Senate’s version of the border funding bill was sent to the floor. Pelosi later mocked the group’s influence to the New York Times saying they made themselves “irrelevant” to the process by voting against the House’s original bill.

“All these people have their public whatever and their Twitter world,” Pelosi told the Times. “But they didn’t have any following. They’re four people and that’s how many votes they got.”

“The base of the Democratic Party looks a lot more like AOC and Ayanna Pressley than Nancy Pelosi or Chuck Schumer,” Waleed Shahid, the spokesperson for Justice Democrats, a progressive group that helped Ocasio-Cortez, Pressley, and Omar win their seats, told BuzzFeed News. “ There are way more young people, people of color, working class people, and women. The base looks like these members, who supported her bid for speaker, not like the centrists or Blue Dogs who have been trying to oust her for years.”

Shahid, whose organization has backed primary challengers to several incumbent Democrats already this year, said Justice Democrats is not currently planning on endorsing someone to run against Pelosi in California.

“This is not a good look, given that women of color were the core vote who gave her that job she has in the first place,” Allison told BuzzFeed News about Pelosi’s comments. “To diminish, to tokenize, and to vilify women of color who are coming into Congress and breaking all these barriers, after posing with them in all white, and then you dismiss them as ‘just four votes’? They’re not just four votes! For many of us, they’re the physical manifestation of generations of blood, sweat, and tears for representation in Congress.”

“I think that it would be hypocritical to me to remain silent on injustices just because those injustices may come from our side of the aisle,” Ocasio-Cortez told BuzzFeed News on Wednesday. “I think that it erodes one’s integrity and neglect to only point out wrongs when Republicans do them and to not point out wrongs when Democrats do them too, frankly.”

Ocasio-Cortez told the Washington Post the same day that Pelosi’s comments seemed like she was just keeping the progressive caucus at bay to protect moderate Democrats, but it became an “explicit singling out of newly elected women of color.”

“This tension is kind of strange because that’s something that Leader Pelosi has never been accused of and known for, and I really do hope that these bright brilliant women can cross that divide generationally and ideologically and come together to do what this country needs them to do, which is to be strong and to be bold,” Bernie Sanders presidential campaign co-chair Nina Turner told BuzzFeed News. She said she hasn’t kept up with all the back-and-forth between progressives and establishment Democrats in Congress, but that she’s “taken aback by some of the things that I’m reading, but it is my hope that they can come together.”

Progressives have agreed with Ocasio-Cortez’s view of Pelosi’s comments over the course of the weekend at Netroots Nation.

“Commenting on a woman of color speaking out and trying to silence her with accusations of racism is just nuts to me, but it’s that basic thing they revert to. They throw insults, cry innocent, hide your hand, but that doesn’t work anymore,” Brittny Baxter, a movement organizer with Democracy Initiative, told BuzzFeed News about comments from Pelosi and House leadership on progressives like Ocasio-Cortez.

At a Saturday Netroots panel, where Reps. Ayanna Pressley, Ilhan Omar, Rashida Tlaib, and Deb Haaland were greeted to a standing ovation, Allison asked what they say to women of color who are feeling sad and frustrated by people who are trying to silence the work that they’ve done in Washington as activists in the audience unfurled a banner thanking women of color for their leadership.

“I think you have to be unapologetically you,” Tlaib responded. “Sometimes that means, I know for me and a number of my sisters, we represent our districts and we focus on the things that matter in our districts, and to bring them into this space and that does sometimes that does mean I have to vote no on detaining children at the border.”

“A lot of this is that there are a lot of Democratic members of Congress that feel threatened by this younger, more progressive generation of Democrats,” Shahid said. “They’re not used to being challenged in that way.”

Shahid said that Justice Democrats is calling on Pelosi to put the same amount of energy into condemning attacks on progressives as she’s had on comments about centrists. “The thing about the CBC story where a senior aide said AOC isn’t a real person of color and texted a racist meme of a Goomba is that we haven’t seen that same level of condemnation and the calls for unity we’ve seen from Pelosi when it comes to people criticizing the Blue Dogs,” Shahid said.

“The Democratic Party’s leadership loves black and brown people in a really transactional way,” Baxter added. “The problem is that the Democrats in power are the moderates who think they’re doing alright because they’re not outwardly racist and trash, like their raggedy-ass cousins, the Republicans, but the reality is that the work that we’re doing and advocating for is being prohibited and inhibited because they know they’re going to lose power.”

Progressives at Netroots said they’ve grown tired of the attacks on women of color in the Democratic Caucus while remaining silent on issues like the border camps and environmental protections.

“They’re not going to get out of the way, they’re going to get moved out of the way,” Baxter said of Democrats who have chastised progressive women of color like Pressley, Tlaib, Omar, and Ocasio-Cortez. “They have to be moved out of the way because at this point we’re fighting for our lives—we’re fighting against a president who’s rapidly speeding us toward nuclear war, our earth is dying and he’s rapidly moving us towards that, we’re putting children in cages and all of this comes from a fight that directly and first impacts black and brown lives and if these folks aren’t making conversations about how to fix this happen then they need to get out of the way.”

More on Nancy Pelosi and AOC