Many fans have followed Kelly Clarkson’s tumultuous divorce from husband Brandon Blackstock, and it was not an easy ride. However, they might be surprised to hear the nice things she has to say about her ex now that the legal proceedings are finally over.

In a frank discussion about tough breakups with guest Khloé Kardashian on The Kelly Clarkson Show, the talk show host was curious how the reality star learned to “un-love” Tristan Thompson after his multiple betrayals. Clarkson laughed, “How’d you do that? Asking for a friend. Just if you have any paper or a pen?”

Even though she went for that light moment, the “Because of You” singer took a serious turn and dove in deep about how she’s felt in her post-split life. “It’s hard. I think it’s the most ridiculous thing sometimes when something doesn’t work out and you’re in a relationship and you’re so deeply in love — and people are like ‘Oh yeah, why can’t you [move on],” Clarkson explained. “I’m like, I think I might always love that person, I don’t know if it goes away.” Kardashian agreed that the love will always exist, but she’s been able to “change or evolve” after realizing that Thompson wasn’t the right person for her.

Clarkson and Blackstock spent two years in and out of court after he refused to leave her Montana ranch. It caused a lot of strife behind the scenes, but it seems like they’ve found some peace in recent months now that their case is settled. Clarkson revealed that the entire family spent the summer in the same area, and she was able to co-parent their two kids, daughter River, 8, and son Remington, 6, amicably with her ex. He’s the father of her children, and that’s why the love will always be present in some form, even though the marriage had a tough ending.

Before you go, click here to see the longest celebrity divorces that took years to get finalized. 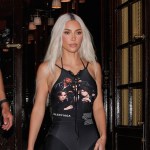