For nearly four decades, Kevin Shields, the leader of the very loud, very fuzzy rock band My Bloody Valentine, has been described using synonyms for “eccentric” and “reclusive.” But the truth is more … what’s another word for mundane? He cooks with his wife, Anna, and they have two dogs. He listens to music on Spotify, and loves Frank Ocean. He practices Wing Chun. He likes to go for walks on his sprawling property in Ireland, where he’s learned a few things about the local deer population.

“The more overconfident ones have this thing where they like to stand within 10 feet of the dogs, and make these kind of high-pitched noises like, ‘What are you going to do about it?’” he said in a recent interview.

Shields didn’t appear on camera, and the band hasn’t taken new photos since the 1990s, but he was having this conversation to make a conventional announcement: My Bloody Valentine is making the majority of its catalog available for streaming, and reissuing it on vinyl. The group has signed with the influential independent label Domino, and plans to release two new records.

“Our original plan was we would record both the albums back-to-back and then go tour on that,” he said. “And that would have been this year, you know, but everything really did slow down.”

The news, however, is still remarkable, because My Bloody Valentine has truly always done things its own way. Sometimes, that has meant calling up vinyl factories in different countries to see which manufactures the best and most specific sound. Other times, it has meant letting its label sue Shields rather than release music it didn’t like. (That happened in 2001, after My Bloody Valentine had been signed with Island Records for nearly a decade without turning out a new album.)

My Bloody Valentine is most famous for elevating “shoegaze,” a dreamy style of guitar music named for the activity of manipulating the technology — literally, gazing at the pedals next to your shoes — required to conjure such a swirling sound. The band is also famous for disappearing: After releasing its second album, “Loveless,” in 1991, it was mostly inactive for nearly 20 years, as rumors of a follow-up swelled and dispersed. After reuniting to perform live, the band surprised everyone in 2013 with “m b v,” a new record that appeared online in the middle of the night with no advance notice, instantly crashing the band’s website as fans swarmed to download it.

As the music industry transitioned to a streaming model over the last decade, “m b v” — along with much of the band’s earlier catalog — was not digitally available, affording it a new kind of mystery in an era when recorded music is expected to be accessible at a button’s click. “My nieces and nephews — they would complain to me, because when they would try and show their friends, they can’t find it anywhere,” Shields said. “They’re like, ‘Why are you so purposely obscure? You know, it seems stupid.’ That kind of stuff that made me think, ‘Yeah, I guess my perception of the world isn’t the world.’ There’s a whole world out there I know nothing about.”

My Bloody Valentine was formed by Shields and the drummer Colm O’Ciosoig in the early ’80s. Initially, it sounded like any number of spiky, moody guitar bands, but a few years later, Shields recruited the guitarist-vocalist Bilinda Butcher and the bassist Debbie Googe, and reconfigured the band’s sound entirely. The group became notorious for the volume of its physically overwhelming live performances, and learned how to harness that noise across a series of increasingly acclaimed releases exploring the ambient and textural potential of the guitar. 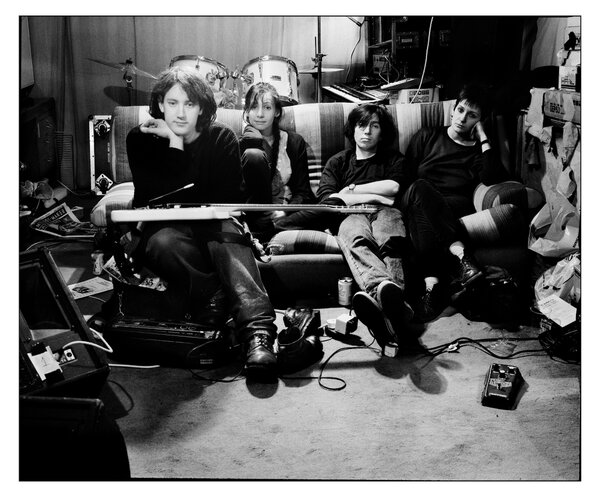 “Patience is a virtue in this band,” Butcher wrote in an email, when asked how she managed the experience of waiting to record the sequel to “Loveless.” “I had two more children and did a lot of flamenco dancing.”

My Bloody Valentine’s back catalog was previously managed by Sony, which inherited the rights after purchasing Creation Records in the ’90s. While the Sony relationship wasn’t unfriendly, the band wanted to own the rights to future releases. “We definitely wanted to work with an independent label, opposed to a major,” Shields said. The decision to sign with Domino was preceded by his friendship with its founder, Laurence Bell, whom he met in the mid-90s: “Domino was the ultimate kind of independent setup — they have as many facilities as most majors, but they’re owned by one person.”

Bell said he first wanted to sign Shields in the early days of their friendship, but settled for finalizing the deal in 2020, right as the Covid-19 lockdown started in the United Kingdom. “He had a very, very clear idea of what he wanted to do,” he said of Shields’ plans. “He can hear things and see things in a way few people can.”

In addition to “m b v,” the band will reissue a series of EPs recorded between 1988 and 1991 as a compilation, along with “Loveless” and the 1988 album “Isn’t Anything,” all on vinyl. And “m b v” will join “Loveless” and “Isn’t Anything” on streaming services and online stores worldwide; the EPs won’t be digitally available in North America, as those rights are held by Warner. Shields said he’d also like to reissue the band’s earliest releases, recorded with the singer David Conway, once they can be properly remastered.

Right now, the band’s members are waiting to see when they can get together in person at Shields’s home studio — O’Ciosoig also lives in Ireland, while Butcher and Googe are in England — to begin recording. If that can’t happen, they’ll explore remote options. Shields said the first of the two albums will be “warm and melodic,” while the second will be more experimental — a stark evolution from what he called his otherwise “very traditional” writing process to date.

“I’m not describing it properly on purpose,” he said, after a somewhat vague explanation. “I don’t want to give too much away because I could lay it out verbally, and then someone’s going to go, ‘That’s a really good idea.’” As for a timeline for release, he didn’t say. (“I think once I can get over to Ireland it will get done very quickly as my vocals are often the last thing to be recorded,” Butcher wrote. “They’ll probably be finished by the end of the year.”)

Despite the band’s scant digital presence, new generations have continued to find My Bloody Valentine; its live audiences skew younger, which Shields counted as a nice surprise in a world where artists are encouraged to overwhelm their fans with content. “There’s always going to be a certain kind of music fan that discovers things and checks it out,” he said. “When I meet young people, I’m like, ‘Oh, I have hope for the future.’ They seem bright, and they seem alive.”

(Of the younger generation’s emergent nostalgia for his ’90s era, he remarked, “It’s kind of amusing because I’m literally incapable of grasping it.”)

Not long after “m b v” came out, Shields worried his hearing was beginning to permanently decline, a consequence of the band’s deafening performances. (They pass out earplugs at shows — highly recommended.) Luckily, that deterioration has stopped, and the band has found subtle ways to mitigate the lasting effect of their loudness without sacrificing it altogether.

“For me, it’s very difficult to relate to sound but not feel it,” he said. “It’s kind of the fundamental thing of my association with music. And it seemed really strange to me that you would play live and the audience don’t get to experience the same thing that you experience.”

For years, the idea of My Bloody Valentine releasing music was treated like a distant possibility. Bell did acknowledge the inherent uncertainty of signing a band known for taking its time. But Shields has no intention of going another 22 years between releases. He mentioned artists like Paul McCartney, who’ve continued regularly recording decades after their careers began, and said working with Brian Eno on a pair of 2018 singles had encouraged him to take a more agile approach to making music.

When he was young, Shields said, he thought he needed to peak before he turned 25; after My Bloody Valentine achieved some success, he stopped thinking about time altogether, hence the long layover. Those days have passed. “Time is a bit more precious,” he said. “I don’t want to be 70-something wanting to make the next record after ‘m b v.’ I think it’d be cooler to make one now.”