Kim Kardashian and Kanye West have been through a lot together throughout the course of their relationship and they’ve undeniably hit some very rough patches along the way. So when news leaked that the famous couple ultimately decided it’d be best to go their separate ways and were in the process of finalizing their divorce, it seemed like the natural response to the direction their romance had played out publicly. While neither of the two has confirmed the news themselves, fans are finally getting some insight into Kardashian’s breaking point on Keeping Up With the Kardashians. 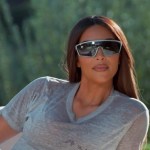 As reported by Buzzfeed News, things started to unravel when West launched his campaign for President of the United States and “branding” Kim and her mother Kris Jenner “white supremacists” in a now-deleted Twitter rant. While she doesn’t go into specific details on camera, Kim admits that she and West are “going through some things” during the show’s latest episode.

Although Kim is visibly frustrated by the situation, it’s the rest of the KarJenners who gives fans an insight as to the turn Kimye’s relationship had taken. “I just feel like she’s struggling a bit with all the stuff going on,” Kris is quoted as saying on the episode while speaking to Khloe and Kourtney.

Khloe agreed with her mother and later added her own two cents on the situation, saying, “There’s a lot going on in the media right now and Kim is going through a really, really hard time.” She continued: “She’s dealing with a lot internally. I think my mom’s idea to get Kim to have a good time is really cute.”

Around this time, the outlet notes that it’s clear Kim was “privately discussing divorce” to which Khloe makes it clear her family has her back no matter what and is here “to love and support her” with whatever she “chooses to do.”

Before you go, click here for all the celebrity splits and divorces we never saw coming.