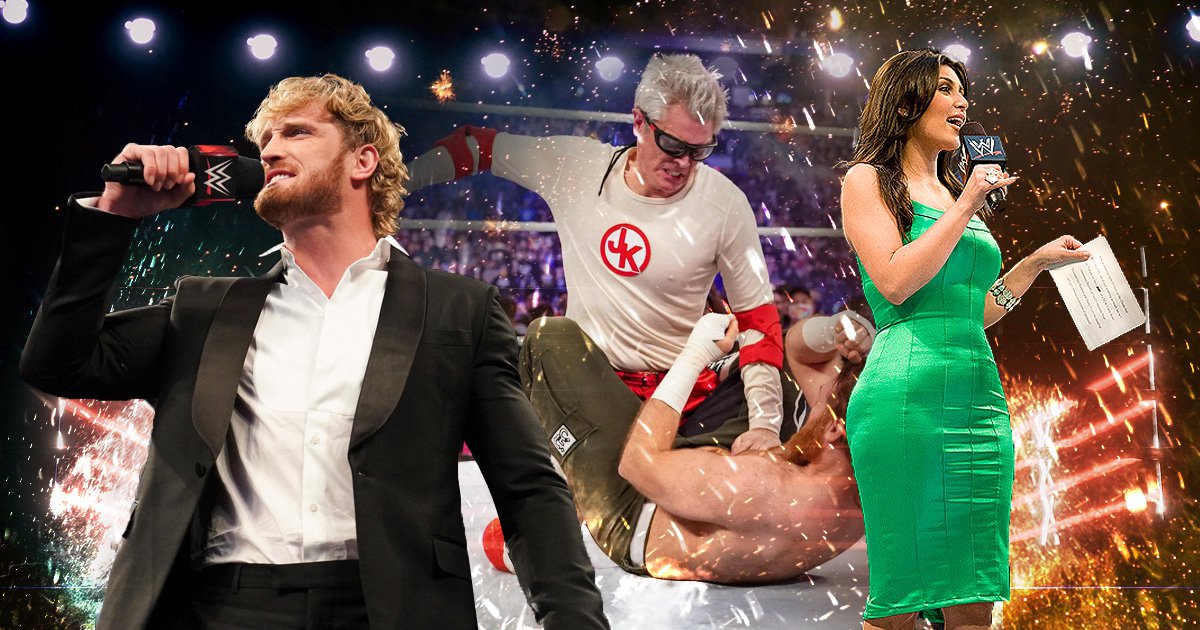 This weekend, Logan Paul looks to make history as he faces Roman Reigns for the Undisputed WWE Universal Championship at Crown Jewel.

The controversial social media sensation – who is continuing a long history of celebrities crossing over into the wrestling world – will look to build on his brother Jake’s win over Anderson Silva on Saturday night by claiming the world title in Saudi Arabia in what will be just his third ever match.

He’s already made waves by beating The Miz in July at SummerSlam just months after they teamed up in a winning effort over Rey and Dominik Mysterio at WrestleMania.

There’s a chance he might have some famous backup too, with WWE boss Triple H suggesting Jake could be in Saudi for the bout, offering some help as Logan faces a tall task dealing with Roman Reigns and the rest of the Bloodline.

Triple H said: ‘Undoubtedly Roman will have the entire Bloodline with him which would make one wonder if Logan will have his very famous brother Jake Paul – fresh off his win against Anderson Silva – in his corner to help even the odds.’

Daily Show host Jon Stewart shocked WWE fans around the world during a huge winner takes all title match at SummerSlam 2015 when he made a guest appearance towards the end of the Seth Rollins vs. John Cena bout.

Stewart took out Cena with a steel chair, which resulted in Rollins becoming the WWE World Heavyweight and United States Champions, all because Stewart wanted to protect Ric Flair’s WWE Championship record.

This not only caused a huge uproar in the crowd, but Cena had something to say about it following the fight, and finished his row with Stewart by hitting him with the Attitude Adjustment.

After being eliminated by Sami Zayn in this year’s Royal Rumble, Johnny Knoxville was looking for revenge as the pair’s rivalry heated up, all building to an Anything Goes Match at WrestleMania 38.

What followed was a masterclass in entertainment, and while the now-Honorary Uce took the upper hand at times, the Jackass star used everything from a bowling ball and a giant hand to Party Boy and Wee Man to get the win.

Hopefully, like Logan and Bad Bunny, it’s not the last we’ve seen of Knoxville in a WWE ring.

Throwing it back to 2008, Kim Kardashian made an appearance at WrestleMania 24 as the host, and she appeared backstage hyping up the Money in the Bank ladder match.

However, it was not smooth sailing for Kim, as WWE superstar Mr. Kennedy interrupted her mid-flow, proclaiming that he would be victorious in his upcoming match.

This is still such a surreal clip to look back on…

Honestly, there are plenty of picks here when it comes to Bad Bunny in WWE, but let’s throw it back to where it all began when he appeared at the Royal Rumble to perform his hit Booker T.

The Miz and John Morrison ended up on the wrong side of the Grammy Award-winner, who laid them out with a diving splash, and went onto team with Damian Priest to beat the duo at that year’s WrestleMania.

Earlier this year, he was a guest entrant in the men’s Royal Rumble only to get laid out by Brock Lesnar – and it’s only a matter of time until we see him in the ring again.

Mike Tyson gets involved at WrestleMania 14

One of boxing’s greatest and most intimidating champions, Mike Tyson, made his WWE debut serving as the special enforcer in the showdown between Shawn Michaels and ‘Stone Cold’ Steve Austin, causing a media circus to surround The Show of Shows in 1998.

The Baddest Man on the Planet – who later became a Hall of Famer – returned to WWE in 2010 as the guest host of Raw and later went head-to-head with Triple H and HBK to secure victory along with tag team partner Chris Jericho.

He’s stayed involved with wrestling over the years, and including reigniting a feud with Jericho in AEW.

Arnold Schwarzenegger and Joe Manganiello face off against the Miz (2014)

Hosting Monday Night Raw, Arnold Schwarzenegger and Joe Manganiello joined Hulk Hogan on stage, to try and convince him to include them in that year’s Andre the Giant Battle Royal.

Before they could finish, they were interrupted by the Miz, who proceeded to face off against the three in the ring, asserting his authority and attempting to send them packing.

It was clear the A-Lister had bitten off more than he could chew, when he was shoved by Manganiello, punched by Schwarzenegger and sent soaring out of the ring by Hogan.