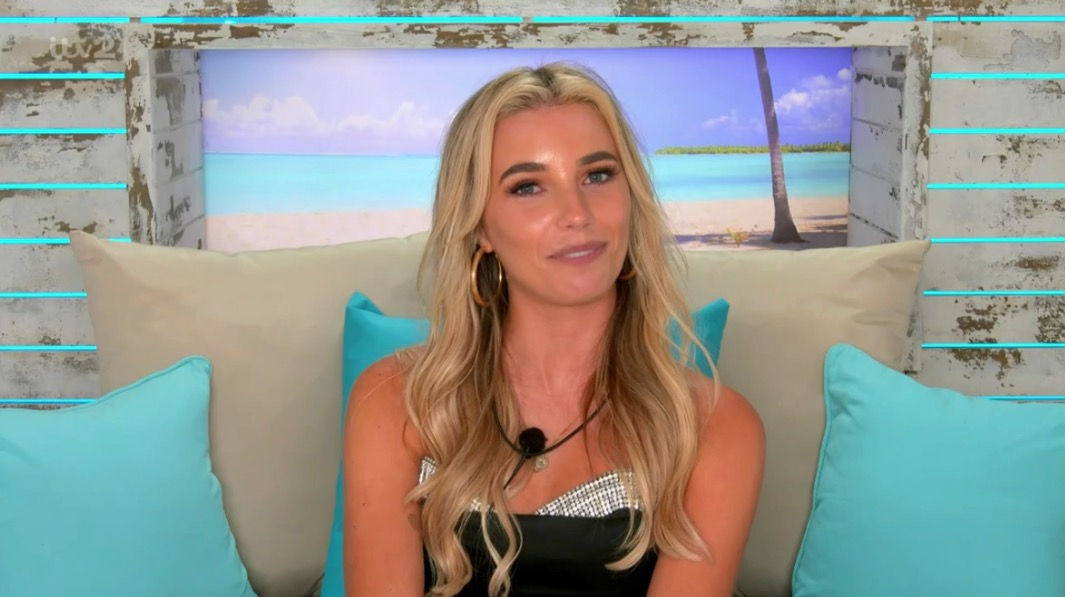 Tonight’s Love Island kicked off with a raunchy game to break the ice between the islanders – but Lana Jenkins’ sensual dance didn’t go quite to plan.

During the game, the make-up artist was tasked with choosing the contestant that she fancied the most to pick from the circle around the firepit and give a lap dance, shortly after bombshell Tom Clare’s arrival.

Rather than go for financial advisor Ron Hall, who she coupled up with on the first day, she instead chose airport security advisor Shaq Muhammad in a shock decision.

As she stood in front of Shaq, who had sat down on the bench, Lana dropped down in front of him… but immediately sprung up when she realised she’d ripped a whole in the back of her skirt.

Speaking in the Beach Hut about the unfortunate incident, she explained: ‘My skirt split right open, right down the middle of my crack.’

Fortunately, Lana didn’t seem too embarrassed by the tear, brushing off the blunder like a pro.

However, over on Twitter, fans couldn’t help but feel second-hand embarrassment for her.

‘Not Lana splitting her skirt,’ one person wrote, while another said: ‘Loool poor Lana 💀how unfortunate.’

Wait so Lana is with Ronâ¦fancies Shaq and her skirt just split. So much to uncover hereð­ð­ #LoveIsland

‘No she did not. Lana omg,’ another exclaimed, as one very shocked fan remarked: ‘Not Lana’s skirt ripping when she slut dropped eye-.’

Several viewers were staggered by the fact that Lana expressed interest in Shaq, having previousy appeared to have had tunnel vision when it came to Ron.

‘Why’s no one asking Lana about choosing Shaq,’ a confused Twitter user wrote, as another stated: ‘Did we miss a chapter of Lana fancying Shaq?’

While Shaq still seems set on pursuing biomedical student Tanya Manhenga, who he’s coupled up with, time will tell if his head will turn.

Love Island returns tomorrow at 9pm on ITV2 and ITVX.