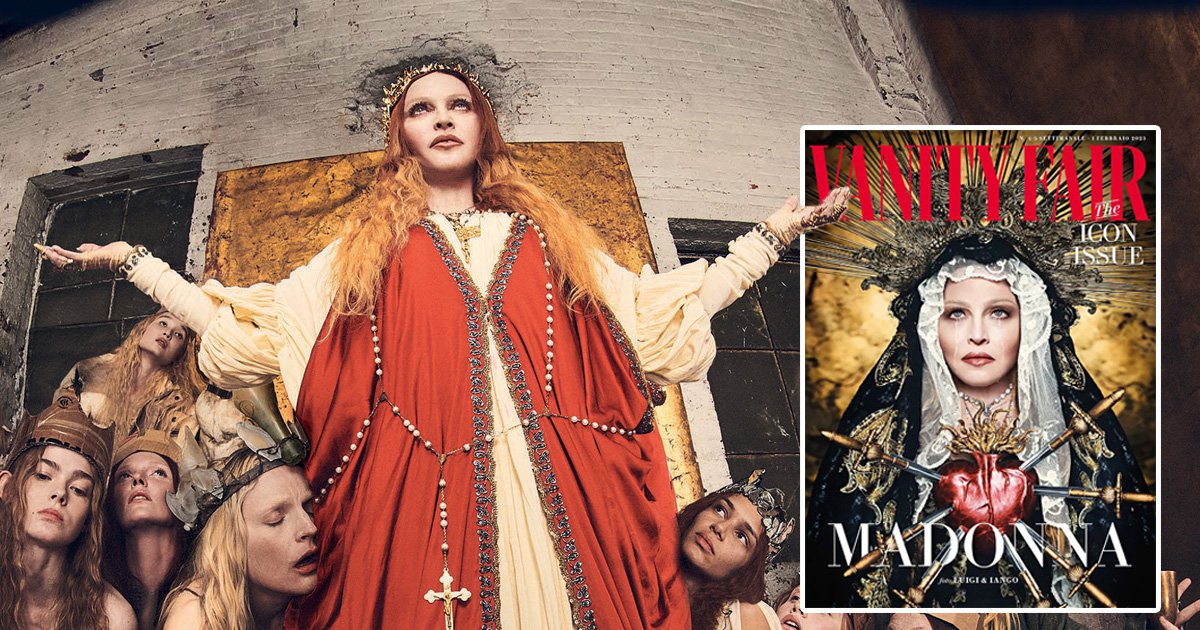 Madonna went all out for a new photoshoot, transforming into the Virgin Mary and recreating the Last Supper.

The 64-year-old announced her upcoming world tour on Tuesday, to celebrate an incredible 40 years in the music industry.

So, it was only right that the Material Girl musician was the first person to grace the inaugural Vanity Fair Icons Issue – with the Spanish, Italian and French versions of the publication collaborating on the finished product.

She took the opportunity with both hands, appearing on a cover as the Virgin Mary, complete with a stunning headpiece from Dolce & Gabbana, placed on top of an intricate veil.

In the snap, she gazed out above the camera with tears streaming down her face.

Another picture showed the Queen of pop donning red robes and a white dress as she stood powerfully on a food-covered table, surrounded by other women.

Madonna was captured by photographers Luigi & Iango for the issue, with Olivier Bouchara – head of editorial content for Vanity France – praising the shoot.

‘In this very special issue, Madonna becomes Madonna again: an icon,’ he said in a press release.

‘Not just the embodiment of a musical trend or a style of dress, but a figure as disturbing as she is sacred.

‘She has given herself up body and soul to the creativity of our photographers, Luigi & Iango, to redraw with them, three decades after Like a Virgin, the contours of her relationship to religion. Paintings, more than photos. Reinterpretations, more than representations.’

‘This is a good time for me – I’m gathering ideas, getting inspired, hanging out with creative people, watching films, seeing art, listening to music,’ she said in the accompanying interview.

Well, Madge isn’t wrong as she will be embarking on the Celebration Tour to commemorate her incredible career so far.

It kicks off in Vancouver, Canada on July 15 and will visit cities across the United States and Canada as well as the UK and Europe, before coming to a close in December.