Welcome to Metro.co.uk‘s The Big Questions, where we ask, well, the big questions (and the smaller ones too) and this week, we’re diving deep with Natalie Imbruglia.

The Aussie is celebrating 25 years since her debut album Left Of The Middle. Yes,

It’s breakout single Torn reached number two on the UK Singles Chart, and was number one on the Billboard Airplay chart for 14 weeks, with more than a million copies sold in the UK alone. Left Of The Middle which went on to sell over seven million copies worldwide.

And while we’ve not stopped banging out Torn in karaoke clubs and on the sticky dancefloors of local pubs for over two decades, Natalie is enjoying rediscovering songs she’s not sung since the album’s release.

‘It’s going back to this person that you were all that time ago,’ she tells Metro.co.uk amid her anniversary tour. ‘The joy of a first album is that you only have the first time once, so one thing you can never get back is that beautiful, ‘oh my god, I’ve got a record deal and I’m gonna be a star’ [feeling]. Even though I was on a TV show there was no expectation musically, so there was freedom in songwriting and exploration and a joy when you get that first album out. It’s nice to revisit that feeling that I had.’

Alongside the tour Natalie, 47 – who welcomed her first child, son Max, in October 2019 – re-released the album with a special limited edition blue vinyl yesterday and reflecting on her massive success agrees with the assumption she’s having a lot of fun right now, after joining Coldplay on stage at their recent Wembley gig, reuniting with Neighbours chums for the then-final episode, and also took out the top spot of The Masked Singer as Panda.

Taking the mick out of herself, though, she jokes she’s just ‘lucky’ the 90s are cool again.

How has it been, being back on the road touring your debut album?

It’s been such a whirlwind and so exciting, I’m just in my element at the moment. [It’s been] such a warm response and yeah, buzzing.

Also, my voice was really strong, I had three [shows] in a row on the end and normally by the third show you start to get tired, but my voice was fully there. It’s just such a joy from start to finish.

Touring takes a toll, I’m sure!

Yeah, and let’s face it I’m not a spring chicken, so I didn’t know what was going to happen. It seems like I’ve got quite a bit of energy! I’ve got a great band and I think I might be a rock chick at heart, because a lot of the songs off the first album have made me realise how much I love rock songs. I think I need to bring songs like One More Addiction back. 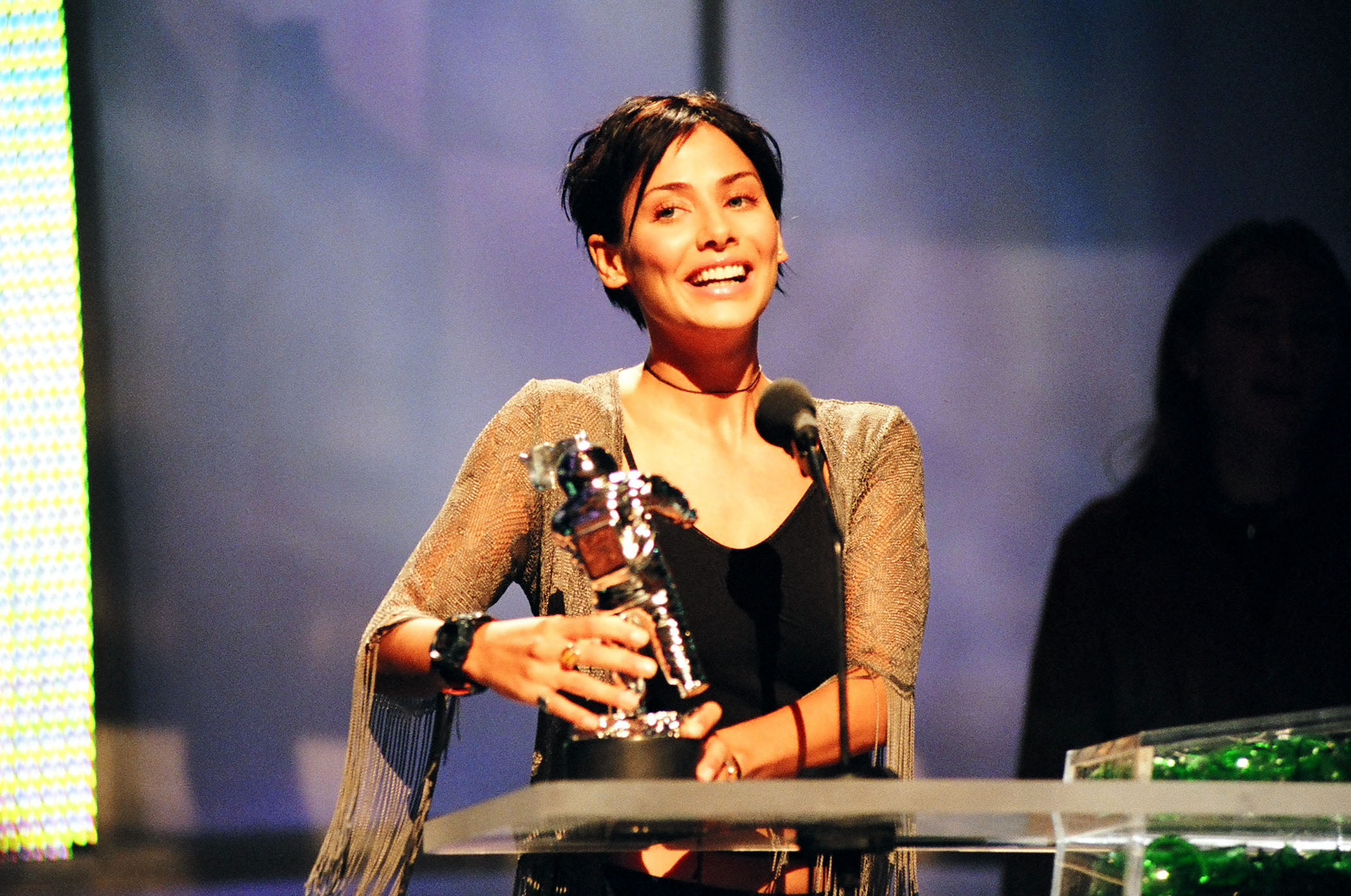 It’s weird to relearn songs you wrote, it’s not like I sit at home listening to my own music, so it’s nice to remind myself.

Were there any songs that took you back to a certain place you were in 25 years ago?

To poke fun at myself, the funniest lyrics in Something Better, a B-side we do in the set, is something about ‘you just don’t feel a thing when the needle’s going in’. I was giggling, when you’re young, trying to be edgy and dark. [Now] you have this different relationship with yourself, you’re not trying to be edgy or cool because you get past trying to be anything other than who you are. But I was clearly an Alanis Morrisette fan.

Having risen to fame through Neighbours before Torn came out, have your feelings on fame evolved over the decades?

I think it sounds kind of weird but what was a blessing in disguise for me, was I had this taste of fame with a soap opera. With television fame, you’re more famous on the TV, so day-to-day experience, walking down Chapel St [in Melbourne] and people screaming out Beth!

As a musician, it’s not quite the same as the fame of being in people’s living rooms. I had this experience of extreme fame and then I went to the UK and was even more famous.

Even though my two-year run [on Neighbours] had finished in Australia, they were behind, so you got to ride this wave of fame without needing to work for a year; you’re promoting the show but behind-the-scenes I was trying to get a work permit to be an actress and I couldn’t get one. I ran out of money and the fame started to dwindle, so I saw how transient fame was.

I also got very much into meditation before I got my record deal. I think I was two grand in debt signing the deal, we had a luncheon at La Familia and I remember going ‘oh my god, I’m gonna be ok’. I guess by the time Torn fame happened I’d discovered meditation, which I have to say, really, really helped, me, espicially with the second album. I had some tools to deal with it.

You took six years away from the music industry – do you think you’d be doing this tour, and releasing this album if you didn’t take that time?

I think that sometimes there’s courage in walking away from something that’s not giving you joy. The album Come To Life, which, ironically, didn’t come to life, which always tickles me, it drifted away and I had three Coldplay co-writes on there, you just think, how on earth is this possible? The music was fantastic and I stand by that. I got to this place where I thought the universe doesn’t want me to do this. Right or wrong, it’s a brave decision to say, ‘you know what, there’s other things that I enjoy’.

It felt like swimming upstream for two long. It felt like every decicion I made went wrong, I couldn’t find my groove, so the beauty of that is I went and was a judge on X Factor Australia, I went to LA and studied acting, I didn’t get a big Hollywood break – maybe that’s what I was going there for – but I realised how hard that career was and it made me appreciate the simple act of singing and the gift that is, so when I went back to it, it was a joyous thing.

One-hundred percent. I think becoming a parent, I do really believe children bring blessings. For me, I think my creativity started to flow because that was a part of my soul that was unfulfilled. I definitely think looking back a big part of my writer’s block was tied into that part of my life not being in place. It’s been amazing.

I wouldn’t have said yes to doing Masked Singer even five years ago, becoming a parent and going, oh my god imagine what my son thinks of me being a giant panda. I was so excited. They were pitching all these costumes… I wanted to be a blue panda.

Highlight of my career, I bloody loved it. And, I was more famous for two weeks when I was a panda, than I’ve ever been in my whole career.

Has it made you want to do more TV like that? You are not short of opportunities in the UK

I’m a bit dysmorphic which I think counts Strictly out, which is such a shame because I’m a trained dancer. I think that ship might have sailed. I don’t know if I’ve got the stamina for that. It’s a phenomenal show.

I can’t think of a weird place but I do have people calling me often from supermarkets in Australia which is tickling me. I must be on some supermarket playlist.

I never really broke America… that album did, what am I talking about? But I didn’t tour, and it’s hard to maintain that kind of success in the States, but when I see videos on social of people in the States loving on that song it’s a really nice feeling.

Social media brings the resurgence of songs we loved in the 90s. Nostalgia keeps us going!

Lucky for me 90s are trending, I feel like if you stick around long enough you become cool. Like a pair of shoes. If you hang onto them, polish them up… I feel a bit like that pair of shoes at the moment.