On a recent weekday morning, a cluster of 10 masked out-of-towners found themselves in the garish maw of Times Square. Tim Dolan, their tour guide, held up an iPad showing a black-and-white photograph of the area in 1900, when it was filled with horse carriages rather than jumbo LED screens. In the photo, a man is shoveling a pile of manure. “The only thing that hasn’t changed is the smell,” Dolan said with affection.

Dolan calls himself “probably the only New Yorker who would ever say they love Times Square.” It’s his neighborhood, he says, even though he lives in an apartment in Hamilton Heights with his French bulldog, Belasco, named after his favorite theater. 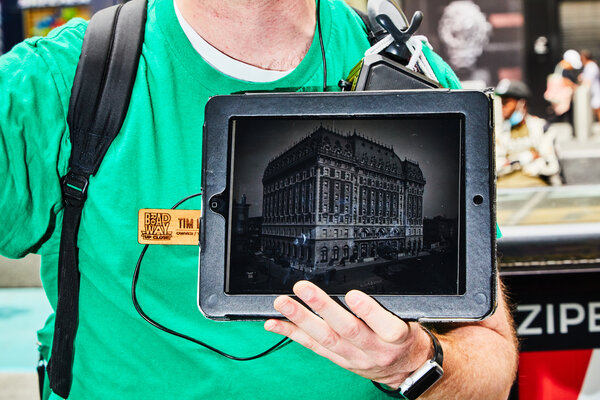 He’s also probably one of the few people who can tell you the story of the actor who appeared in 9,382 performances of “The Phantom of the Opera,” or precisely why there were live lions onstage at the Broadhurst Theater for 14 nights in 1921.

Dolan is the founder of Broadway Up Close, whose shamrock-green-shirted tour guides have, for 11 years, led one hour-and-45-minute tours of the area between 41st and 54th Streets, from Avenue of the Americas to Eighth Avenue. They talk about the buildings, the business and backstage gossip of the Theater District — including this newspaper, which gave Times Square its name — tracking its history from Oscar Hammerstein I to “Hamilton.” Dolan is also behind one of Times Square’s latter-day landmarks and photo ops, currently stashed away: a typographical jumble of the letters of “Broadway” near a pedestrian plaza, which looks good on Instagram.

Last year, when the Great White Way went dark, Dolan’s tours stopped accordingly. (At the time, they were running 10 to 12 tours a week.) The exsanguine atmosphere of the place was especially heartbreaking for him. He missed his adopted community of performers, stage hands, TKTS staff members. “Even the Naked Cowboy,” he said. “I felt like I saw literal tumbleweeds roll down 44th Street.”

But now, with coronavirus in retreat and reopening dates appearing on theater marquees, Dolan and his Broadway Up Close tour guides are back on the sidewalks nearly every day, catering to a slowly but surely growing number of visitors.

It beats giving the tours virtually, though Dolan still conducts a couple of virtual tours a week. “So much of it is reading the audience, engaging with the audience, picking up on what they’re most interested in,” Dolan said. “It’s hard to do that in a webinar.”

Given that the tours attract musical lovers and theater die-hards, they are also currently serving as a substitute for actual Broadway. “We would definitely be seeing a show a night,” said Carrie Mershon, a visitor from Kansas who was taking the tour. She had booked the family’s New York trip months ago, in the hopes that Broadway productions would be up and running by now. No such luck; their show tickets had been refunded. “This fills the void a little bit.”

At least Dolan can be relied upon to put on a show. Befitting the location, the more over-the-top the story, the better: Know the one about a “Follies” girl who found herself riding a runaway ostrich? How about the music director who dove into a watery orchestra pit after a flash flood at “Evita”? Or the theatergoer who fell out of the window onto the marquee of the Lyceum Theater?

Dolan delivers colorful anecdotes and his fact-filled soliloquies with the polished enthusiasm of a jobbing actor. He was last onstage three years ago, in a regional production of “Arsenic and Old Lace,” and said he had booked a show in Michigan before the pandemic struck.

He has an actor’s knack for the emotional overshare too, pointing out his ex-girlfriend in a cast photo of the “Hamilton” touring production. “She’s with Daveed Diggs now,” one of the younger members of the tour group said, matter-of-factly.

“I am aware!” Dolan replied.

He moved to the city in 2003 to train at the American Musical and Dramatic Academy. After graduation, he performed in “Altar Boyz” for two years, and then felt the pressure to get what many in the profession call a “survival job.” He’s still not a fan of the term. “I didn’t want to just get by. I wanted another job that was just as fulfilling as when I’m onstage or in an audition room.”

Realizing there was a lack of good Broadway-centric walking tours, he picked up his New York City tour guide license and set out to tell strangers lesser-known stories about his favorite place in the world. He read scores of books and scoured the photo archives of the Museum of the City of New York and New York Public Library for the Performing Arts. Most enjoyable, he relentlessly picked the brains of other industry professionals.

If anything, he had to rein in his passions: The original version of the tour covered all 40 Broadway theaters open at the time, and was seven-and-a-half hours long. Eventually, Dolan divided it into three separate tours, later adding a historical Alexander Hamilton tour and one on Broadway ghost stories, plus an interior tour of the Hudson Theater that’s currently on pause.

Dolan’s eyes light up when describing the very earliest days of Times Square, a time when, for example, you might visit a recreation of a Dutch farm, replete with sheep and windmill, on a 42nd Street rooftop. Perhaps more surprisingly, Dolan is a defender of the 21st-century incarnation of the place. “We lament the loss of the old, while loving the new,” he told the group while his “Shubert Brothers and Beyond” tour stopped in the spot where a beautiful French Renaissance-style theatrical complex called the Olympia used to be. (An Old Navy store is there now.)

“You can have commerce, and art, and a safe neighborhood all at the same time,” Dolan told me. “If you’re looking for the nostalgia amid the ‘Disneyification,’ you just have to know where to look. Wanting to find the old among the new is part of why I started this.”

Dolan expects Broadway Up Close to be back to prepandemic levels of business later in the year. By then, he hopes, the area will start to feel like its old self again. “I don’t think it’s in September, when we just have a couple of shows open. I think it’s once we hit maybe December, and there’s a handful of shows, and there’s the yellow Playbills in a sea of people in Times Square. Maybe less masks too. I don’t think New York City will fully be reopened until that moment happens.”

Before that, Dolan has a date, on Sept. 14, with the Gershwin Theater — where “Sweeney Todd” had its premiere in 1979 and “Starlight Express” opened in 1987 — for the return of the musical “Wicked.”

“I’ll be the grown man in the last row, crying.”