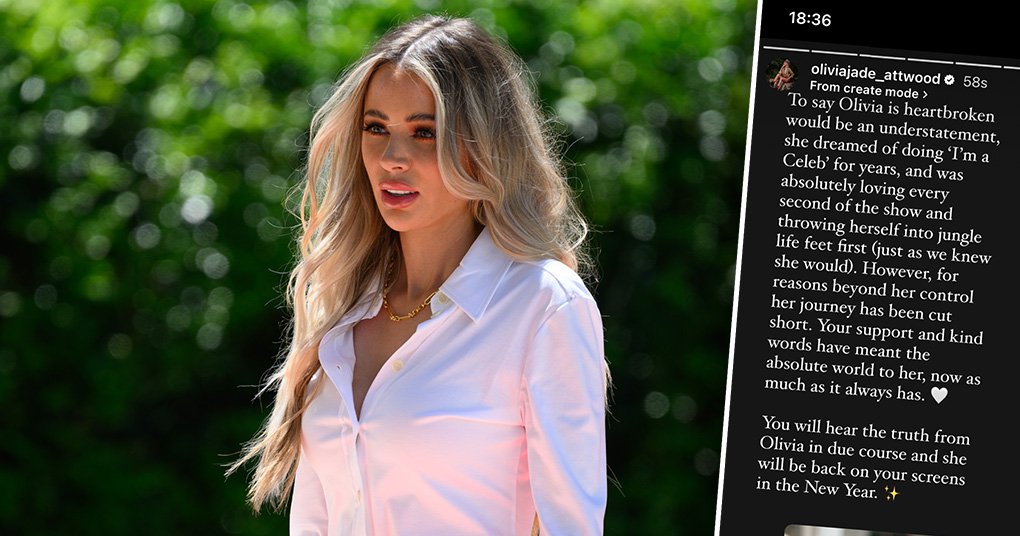 Olivia Attwood is said to be devastated by her early exit from I’m A Celebrity… Get Me Out Of Here! after being forced to quit.

On Monday, it was announced that the former Love Island star had to withdraw from the ITV competition show on medical grounds.

‘As a precautionary measure Olivia needed to leave the jungle to undergo some medical checks,’ a spokesperson said.

‘Unfortunately, the medical team has advised it is not safe for Olivia to return to camp as there needs to be a further investigation.

‘She has been absolutely brilliant and she’ll be very much missed on the show.’

In a new statement posted on her social media account, Olivia’s team has vowed that she will reveal the ‘truth’ of what happened in the lead-up to her departure in due course.

The message read: ‘To say Olivia is heartbroken would be an understatement, she dreamed of doing I’m A Celeb for years and was absolutely loving every second of the show and throwing herself into jungle life feet first (just as we knew she would).

‘However, for reasons beyond her control her journey has been cut short.’

The statement continued: ‘Your support and kind words have meant the absolute world to her, now as much as it has always.

‘You will hear the truth from Olivia in due course and she will be back on your screens in the New Year.’

After discovering the news, she said: ‘I am equal parts flattered and unnerved the public voted for me to be a VIP.’

Olivia is set to feature in tonight’s episode in a Bushtucker trial before her mysterious exit.

It has been reported that she will receive her full fee for her appearance, despite it being cut short.

I’m A Celebrity… Get Me Out Of Here! airs tonight at 9pm on ITV.