Even before the #MeToo movement transformed the way the country, and the world, viewed sexual misconduct and empowered scores of women to speak out, dozens had already come forward with accusations against Bill Cosby.

They were of all ages and from all walks of life — aspiring actors, models and, in one important case, a Temple University employee. Some were young adults. Others were older women with accounts of abuse that stretched back decades.

But they all cheered when Mr. Cosby was found guilty in 2018 of assaulting a woman years earlier, hailing the decision as long-awaited vindication and evidence that famous and influential men could be held accountable.

That sense of relief and justice came crashing down Wednesday as the Pennsylvania Supreme Court overturned his conviction.

Andrea Constand, who brought the charges against Mr. Cosby that had led to his conviction, called the ruling “disappointing” and said she worried it could discourage other women from pursuing prosecutions in cases of sexual assault.

“We urge all victims,” Ms. Constand said in a statement made jointly with her lawyers, “to have their voices heard.”

Patricia Steuer, 65, who accused Mr. Cosby of drugging and assaulting her in 1978 and 1980, said that she had been preparing herself for the possibility that Mr. Cosby’s conviction would be overturned but was still “a little stunned” by the court’s ruling.

“I’m feeling sad because this is absolutely a perceived loss on my part,” Ms. Steuer said. “I’m wondering what the 43-year ordeal that I went through was supposed to be about.”

But she also said she was “consoled by the fact that I believe we did the only thing that we could, which is to come forward and tell the truth.” 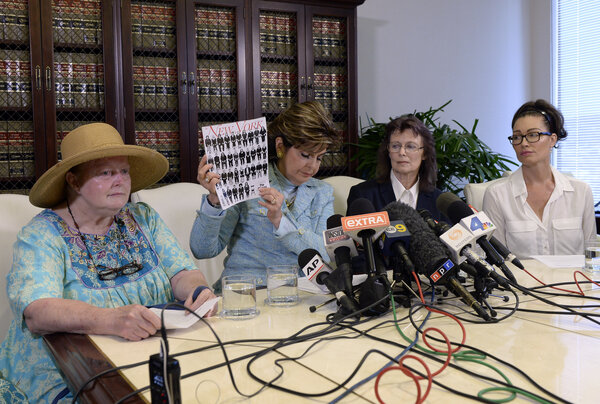 Victoria Valentino, another of Mr. Cosby’s accusers, told ABC News that “my stomach is lurching” and that she was “deeply distressed” by what she said was “the injustice of the whole thing.”

In a brief telephone interview on Wednesday, she said only that she was “overwhelmed and devastated.”

Ms. Steuer worried about what the ruling meant for the #MeToo movement. “This is going to have ramifications for any woman who has ever come forward about a man who did this to them or any person who is thinking about coming forward,” she said.

Eden Tirl, another of Mr. Cosby’s accusers, told Kate Snow of NBC News that the resolution of the case must now also become part of the story of the #MeToo movement and its narrative.

“From the very beginning, the rigid constructs of the statute of limitations did not provide protection or a pathway for justice for the women that came out against Cosby,” she wrote to Ms. Snow via text message. “The outdated laws are so clearly in place, protecting men in these cases, more often than not.”

“I am completely out of breath,” she added.

In a statement, the National Organization for Women denounced Mr. Cosby’s release, saying that “the judicial system in America” had “failed survivors again.”

Tina Tchen, the head of Time’s Up, the advocacy organization founded by powerful women in Hollywood, called the court decision “devastating,” but promised that the bravery and resolve showed by the women who spoke out about Mr. Cosby would not be “in vain.”

And in her own statement, Gloria Allred, the lawyer for dozens of Mr. Cosby’s accusers, said her heart went out to “those who bravely testified in both of his criminal cases.”

“Despite the Pennsylvania Supreme Court’s decision, this was an important fight for justice and even though the court overturned the conviction on technical grounds, it did not vindicate Bill Cosby’s conduct and should not be interpreted as a statement or a finding that he did not engage in the acts of which he has been accused,” Ms. Allred said.