Big, bold and by many accounts about time, the Metropolitan Museum of Art’s 56-word land-acknowledgment plaque, placed on its Fifth Avenue facade in May, honors the Indigenous peoples past and present (principally the Lenape) whose homeland the institution occupies.

Visitors to the Met, or the Art Institute of Chicago, or any of the other museums where land acknowledgments greet them, may well wonder how these sentiments, crafted with extreme care and usually in consultation with Indigenous communities, fit with galleries containing some two centuries of art depicting Native Americans as occasionally brave, sometimes demonic and most often doomed. Not to mention their proximity to many art historical celebrations of Manifest Destiny in landscapes by Alfred Bierstadt, Thomas Moran and others.

This is difficult terrain and the Met has been both staunch and cautious in charting it: the bronze plaque was years in coming, while the murals by Kent Monkman, a Canadian artist of Cree descent, that greeted visitors in the Great Hall from 2019 through April, were an audacious recent commission, offering witty references to celebrated works in the museum’s collection. 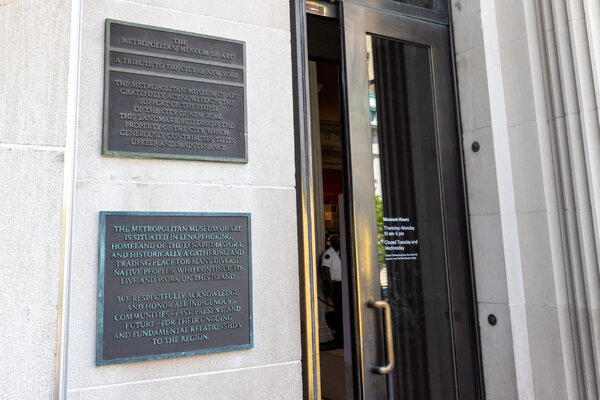 But it is in the American Wing where the intentions of a bronze plaque must play out as something more than virtue signaling. And here you will find a Land and Water Statement crafted by Patricia Marroquin Norby (Purépecha), the museum’s first Native American curator and its first curator of Native American art, appointed in 2020. Longer and more specific in its commitment to presenting Native American art, and its connections to Indigenous communities both historical and contemporary, the statement is mounted next to “Scrimshaw Study,” a handsome 2021 ceramic borrowed from the multimedia artist Courtney Leonard of Shinnecock Nation.

With its pictorial references to the local Shinnecock’s environmental history, Leonard’s contemporary work is placed alongside the historical material of “Art of Native America.” This is a characteristically bold curatorial moment by Norby, and it informs her new rotation of this ongoing exhibition of the pathbreaking collection of gifts, promised gifts and loans from Charles and Valerie Diker, beginning in the 1990s.

Norby lives for physical engagement, for those moments when she can show you how a 19th-century ceramic, textile, carving or painting is made and how it is connected to the contemporary works she has added to the Diker exhibition. “I’m interested in the intergenerational and ecological knowledge that the items I work with embody,” she told me in a rare didactic moment. By the time you have toured the gallery with her it is already clear that the boundaries many museums live with — historic/contemporary, Native/non-Native, European/Native American, fine art/decorative art — are ones she will fruitfully ignore.

She’s been questioning boundaries since her childhood as an “urban Indian” on Chicago’s West Side. Her great-grandparents settled there after leaving the Mexican state of Michoacán in the wake of the Great Depression and she remembers their community with great fondness. “Indians have always been urban,” she says. “There are large concentrations of Indians from diverse backgrounds in every major American city.” Her parents moved to the suburb of Arlington Heights when she was in grade school but she continued to speak of Chicago as “going home,” and sometimes still does.

When she isn’t at the Met, Norby, 50, is in rural Wisconsin on a six-acre farm with her husband, a veterinarian, and their teenage daughter. They hunt, grow much of what they eat, and nearby there is a community of Native women from whom she has learned many techniques of beading and regalia-making. In her leisure time, you are as likely to find her playing the banjo or listening to the Carolina Chocolate Drops, the African American string band, as reading a text on tribal sovereignty.

Her credentials include a Ph.D. in American Studies from the University of Minnesota with a concentration in American Indian History, Art and Visual Culture, as well as a forthcoming book, “Water, Bones, and Bombs,” on art making and environmental issues in New Mexico’s Rio Grande Valley. She has held positions at the Newberry Library in Chicago and the National Museum of the American Indian in New York, won numerous awards and done focused work on the deaccessioning and repatriation of cultural material.

For all of her learning, Norby is less academic in her approach to art than many curators, preferring to talk about how her M.F.A. in printmaking and photography informs her curatorial work. “I’m interested in what goes into making something — the physical and emotional toll. I’m not interested in which artist is hot,” she said. “I love to see things that are deeply connected to aesthetic protocols but have something new and fresh in them as well.”

That passion is on view from the moment you enter the new rotation of “Art of Native America.” The map that initially greeted visitors demarking nine Native American cultural areas — Woodlands, Plains, Plateau, and so forth — is gone. “There are distinct homelands,” Norby acknowledges, “but there was much more exchange than maps can communicate, and, anyway, maps are settler ideas of Indigenous cultures.”

Instead visitors will encounter two contemporary works: “Untitled (Dream Catcher)” from 2014 by Marie Watt (Seneca), a huge assemblage of reclaimed blankets quilted by many hands into a patchwork of Indigenous stories. It sets the stage for the rest of the exhibition, as does the Northern traditional dance dress and accessories (2005) across from it, created by Jodi Archambault (Lakota) with family and friends that features 15 pounds of beads and was worn in powwow dance competitions.

The spirit of community and the continuity of past and present are unmistakable in both pieces, and are unmistakably part of the way Norby, along with Sylvia Yount, curator in charge of the American Wing, have done this reinstallation of the Diker material. Although still arranged geographically, the 116 works from more than 50 cultures have been reduced to 89, of which 29 are recent additions from the Dikers and others.

In addition to putting historic work in conversation with some contemporary pieces, there is an invigorating change in the most routine aspect of museum exhibitions, the wall label. Many of the labels have been adjusted or replaced with texts by artists and scholars from the source communities, erasing, for the most part, the customary hierarchy in which museum curators speak for the art and to the visitors.

“I’m a visitor here myself,” Norby says, explaining why it is not her place to talk about another community’s work, and why it is important to turn to living people to not only speak about an object but to help to dispel the aura of nostalgia that clouds our vision of Native Americans.

There will be other rotations of the collection, Norby promises; perhaps one where works are put in conversation with non-Native art. The possibilities are many, but she assures me that the participation of source communities will increase with each new installation. Will there also be more Native visitors, as there were when she was at the Newberry in Chicago? “It takes time,” she says,” but I have something I like to call ‘Indians attract Indians.’ We always seem to find each other.”

None of this would have happened without the transformative gifts from Charles and Valerie Diker, collected over the last several decades. From the moment their collection was first discussed, the Dikers were eager for the Met to appoint a curator for Native art. Did they envision the disappearance of the map from the original exhibition or the addition of contemporary works in the new rotation? No, Charles Diker said, but “the changes freshen things up.”

“We are learning from each other,” Norby says of the Dikers. “It’s about building trust on both sides.” Yount echoes that, also adding that critical to her hiring was “Patricia’s deep and longstanding commitment to building trust and inclusive relationships with Indigenous communities.”

As we pass through the Engelhard Court on our way to “Art of Native America” I pause by Saint-Gaudens’s statue of a doomed and defeated Hiawatha, expecting a caustic remark or two from her about this routine bit of colonialist depiction. Instead, she surveys the court and says, “Thayer Tolles does such a good job here,” referring to the Wing’s curator of American paintings and sculpture. She goes on to express her pleasure in working with a staff of all female curators.

Norby is aware that she has arrived at an auspicious time, as the American Wing has been remaking itself under Yount. Founded in 1924 in the boosterish spirit of the colonial revival, it has come a long way since period rooms and Pilgrim furniture ruled the day and Native art was shown elsewhere — in the Rockefeller Wing with the arts of Africa, Oceania and the Americas. Since 2018, works by Frederic Remington, Henry Inman, Augustus Saint-Gaudens and many others have also had, in addition to their traditional wall labels, a rotating set of what the Met calls “Native Perspectives” by contemporary artists and scholars. Native art has also been installed here and there in the Wing’s paintings galleries.

When Norby expands the presence of contemporary Native art in the American Wing, she will have gone some distance toward erasing another boundary — the longstanding, peculiar, four-block separation between late modern and contemporary American art and the American Wing’s mid-17th to early 20th century art. And if she then shows Native art in other departmental galleries, something she is eager to do, she will also have begun to realign the museum itself with the new bronze plaque on its facade.

Elizabeth Pochoda writes for The Nation and The Magazine Antiques.