“We walk into our neighborhood Walmart and there’s a sheriff. That’s not normal.” 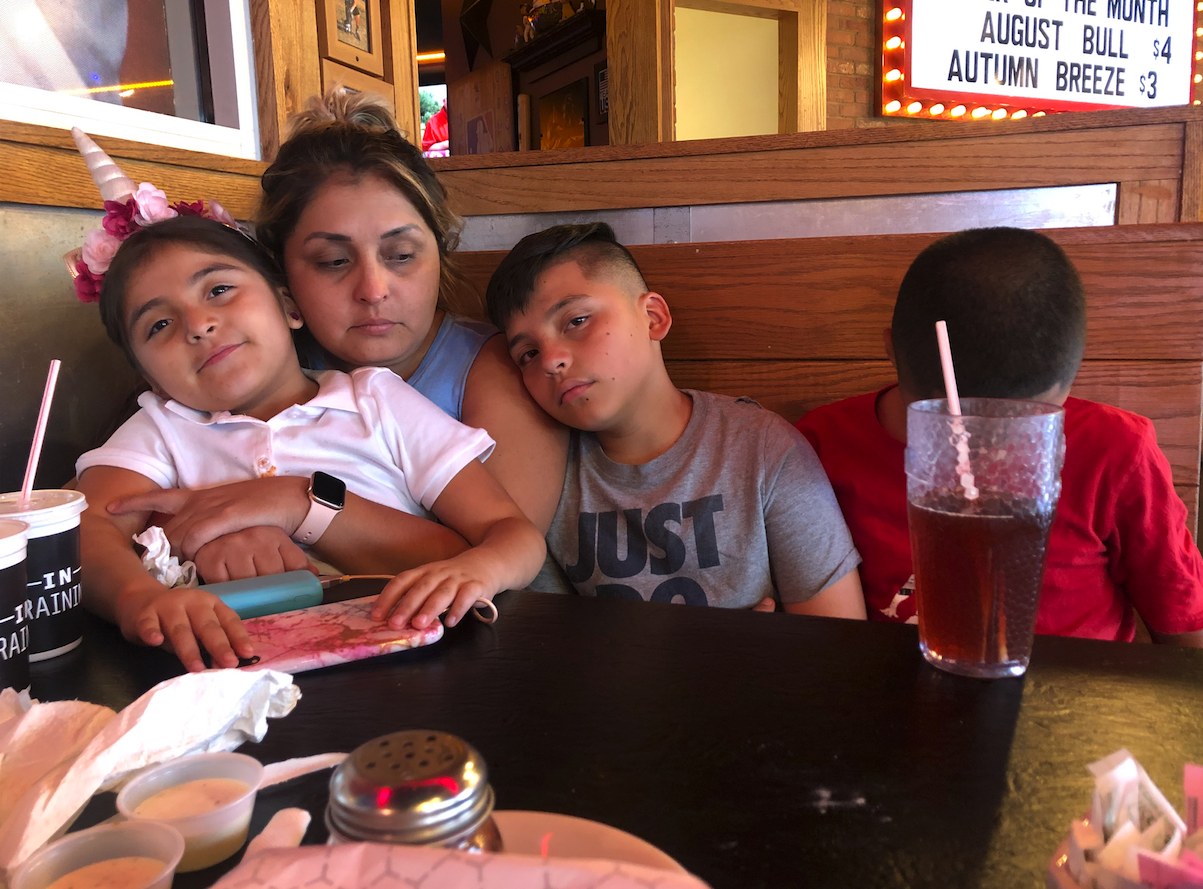 Monica Acosta doesn’t know how to tell her kids that it’s going to be ok, that they’ll feel safe again soon. Since running from a shooting rampage at a Walmart on Saturday, she’s barely been able to go out and buy cereal without her heart quickening.

When she hears a siren, she starts crying, the 33-year-old said over dinner at a deserted Pizza Hut Monday evening.

“I’ve been trying to stay calm, but how do you ever remain calm after that?” she asked.

The mother of three went to Walmart on Saturday morning for a quick trip with her 7-year-old daughter to buy floaties for a trip to a water park. Acosta even left her car running, she recalled, because she was running late to pick up her two boys at a barber shop nearby.

“She wouldn’t even let me look at the candy,” her daughter, Lea Viellgas, interjected through bites of pizza. “Then we heard the screaming.”

It was 10:47 a.m. when they entered the Cielo Vista Walmart through the garden center. Acosta remembers someone on the loudspeaker telling the store to stay calm, that police were coming, and then the chilling sounds of people’s terror.

Lea’s head is still sore from where her mom yanked her ponytail back as she started running.

Lea Viellgas, 7, describes her fear during the shooting.

Since that morning, Acosta, who grew up in El Paso, says she and her kids don’t feel safe doing normal, routine things. She had to go to a different Walmart in her neighborhood on Monday night to buy school supplies, but Lea refused to go.

“My son and I went, and we walk into our neighborhood Walmart and there’s a sheriff,” she said. “That’s not normal.”

El Paso is a sprawling, quiet, and peaceful border city known for its safety and kindness. Residents loves to say that if your car breaks down, everyone stops to help you. Now, they are struggling to process that their community is the latest epicenter of an American mass shooting.

Acosta used to sleep with her door unlocked, and her boys would bike around for hours without supervision. She grew up coming and going across the border to visit family in Juarez, Mexico. Acosta’s parents usually go to that same Walmart to buy cleaning supplies on the weekends.

“Nothing happens here,” she said.

That changed on Saturday, when a white, 21-year-old domestic terrorist drove 10 hours to attack shoppers buying school supplies and groceries. Before the attack, he posted a document on 8chan detailing his hatred of immigrants and people from Mexico. The store he chose is known in the community as the “Mexican Walmart,” because of how many people come across the border from Juarez and Chihuahua to shop there.

The details of the attack have left El Pasoans with a new, frightening reality. An outsider targeted their community because of their skin color and heritage, and they fear it will happen again.

“It’s so different when it hits home. A lot of people are scared. They believe another shooter is out there, or that they’re targeting all the Walmarts because we all shop there,” Acosta said. “A lot of people in that Walmart would come from Chihuahua and I don’t think they will come as much anymore.”

The FBI said it is investigating the massacre as a possible hate crime and act of domestic terrorism. On Monday, the agency issued a statement saying the attack “underscores the continued threat posed by domestic violent extremists and perpetrators of hate crimes.”

After the attack, President Trump condemned “racism, bigotry, and white supremacy,” although he has defended white supremacists in the past, called Mexican immigrants rapists, and laughed when a supporter suggested immigrants “should be shot.”

Fernando Garcia, the executive director of the Border Network for Human Rights, told BuzzFeed News he believes President Trump’s rhetoric has now had a devastating impact on one of the safest cities in the US.

“The expansion of criminalization and militarization of the border and all that wrapped in the rhetoric, the shooting is unprecedented but when you start asking questions about the motive, it makes sense,” he said. “When you listen to the president talk about immigrants as invaders you can’t ignore that there’s a connection.”

Noe Viellgas, 12, discusses how he feels about the rhetoric of the Trump administration.

Even before the shooting, some residents were scared to go to clinics and hospitals because of border patrol, Garcia said.

“Having young people, children that are US citizens, running away from Border Patrol gives you a picture of how embedded fear is in some of these communities,” he said.

In a large community Facebook group, residents have shared their reservations about going to the bank or letting their kids go to school since the attack. They talk about being afraid for their elderly parents going shopping and marvel at the “empty” Walmarts now with police at the entrances.

“I was scared to go out yesterday,” Anna Kaiser, a mother of two who lives in El Paso, said on Facebook Monday afternoon. “I needed to go to JCPenney today and I’m so scared. I’ll be leaving my kids at home.”

“That’s what I’m doing,” another mom replied. “I’m leaving my kids with my sister. I’m not chancing it.”

Across town at a different Walmart Supercenter, police and security guards wearing bright yellow vests mill around the aisles and nod at customers walking in through the sliding glass doors.

Susy Hernandez, a department manager, said she noticed customers “walking around looking over their shoulders.”

“Some of our regulars haven’t been in, or they’re telling me they’re nervous,” Hernandez said as she was restocking candy. “But I’ve lived here all my life and we’re strong. We’re coming together.”

Some residents have been offering to run errands, give rides, or drop off food for those who might not be ready to bring their family into public just yet. 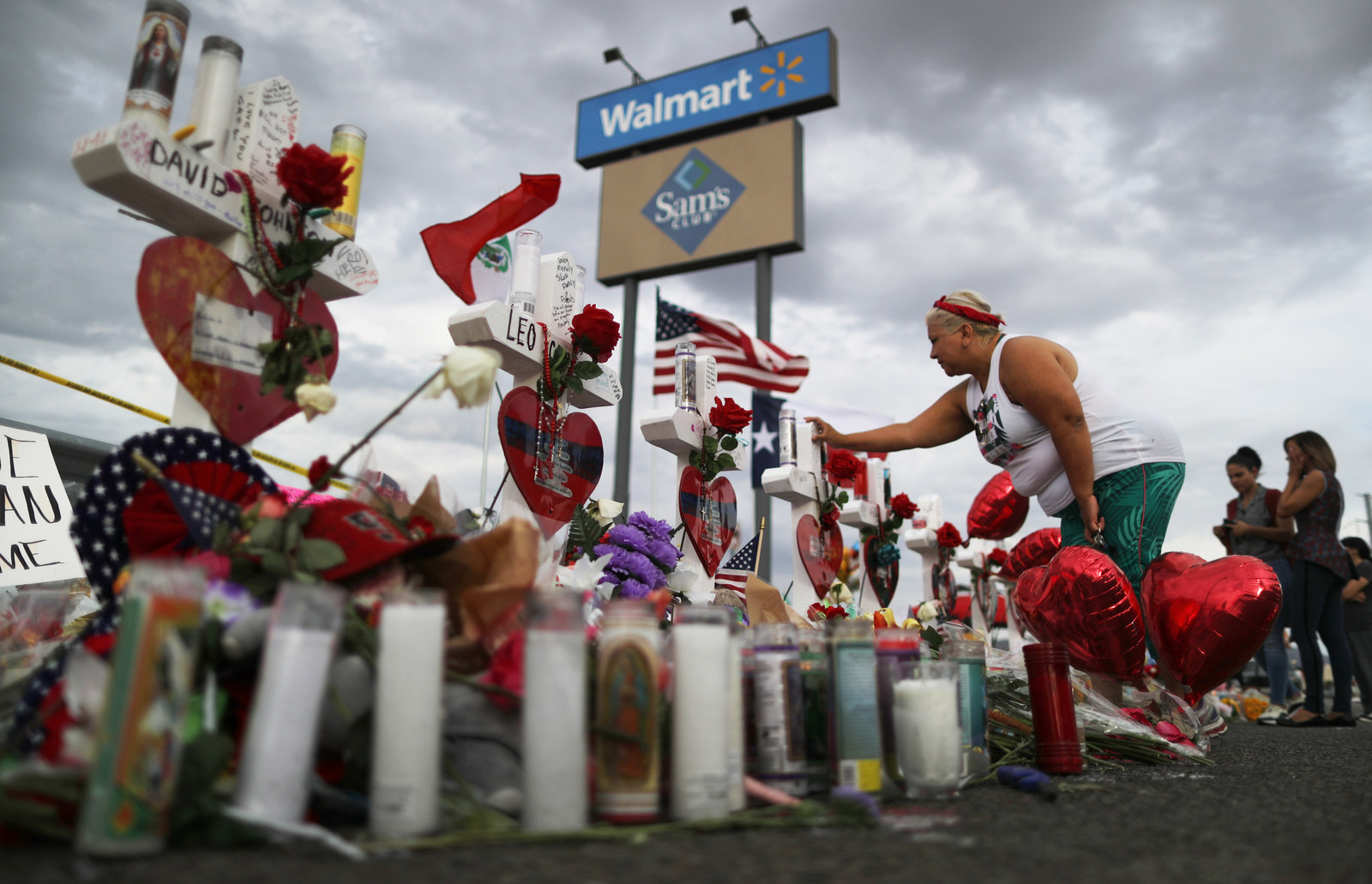 Many people still needed to buy things for their kids, who just started school. The shooting occurred on tax-free weekend, which is a massively popular shopping day in Texas because families can save a lot of money. Many residents had banked on those critical discounts, but are now afraid to go shopping.

So, Roni Armendariz, a 42-year-old who has lived in El Paso nearly all her life, has stepped up. She has bought groceries and school supplies for six families and given rides to three other people whose cars are still barricaded in the Walmart parking lot.

“People here are poor so that an almost 10% discount is the difference between them getting everything they need for their kids or not,” she said. “Four families asked me just for school supplies.”

When Armendariz was going from store to store for traumatized families on Sunday, she noticed the usually loud, bustling spaces were sparse and quiet and “there were no kids.” The shoppers were mostly single adults with a school supplies list.

Residents emphasized, though, that they refuse to let the fear be crippling. “Try to be strong,” they tell each other, posting encouraging messages about courage and not living in fear. If they do, that means the shooter wins.

“Being strong and helping out your neighbors is what we’ve always done. It’s who we are,” Armendariz said. “Our normal is that we help everyone and accept everyone for who they are. We won’t let him change that.”

A few minutes later, she asked me to give “that mom,” Acosta, her number.