CLERMONT-FERRAND, France — Onstage, 26 dancers. In the audience, 550 masked people. And in the theater’s restaurant, a full dining room of happily chatting patrons. Welcome to France, where the performing arts world is making a herculean effort to start its season, despite increasing coronavirus cases across the country.

Dance is on offer in Paris, but most of it involves limited numbers, reprises and extracts. The Paris Opera Ballet, for example, reopened this week with short, gala-like programs never involving more than two dancers onstage.

But the first substantial dance premiere in France since the onset of the pandemic was not in Paris, but here in Clermont-Ferrand, several hours to the south by train. It was Angelin Preljocaj’s “Swan Lake,” which debuted Wednesday at the newly opened Comédie de Clermont.

In interviews, Mr. Preljocaj has described “Swan Lake” as “the Everest” of ballets. Did he scale it? 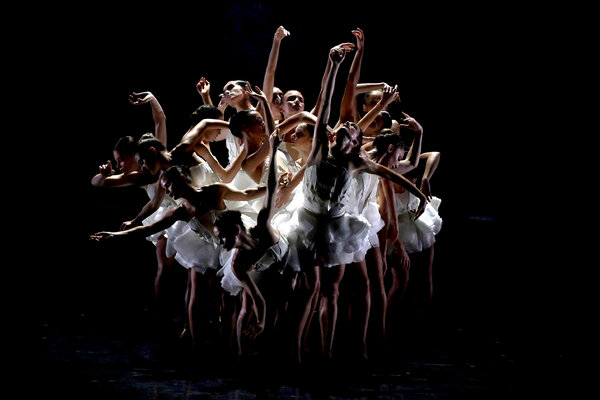 The short answer is not really. The more nuanced answer is that many ballet choreographers, often reworking the famous 1895 version by Marius Petipa and Lev Ivanov, find it difficult to get “Swan Lake” right. (A major exception: Alexei Ratmansky, whose production is faithful to the original and somehow sparklingly modern.) Contemporary dance choreographers — Mats Ek, Matthew Bourne, Dada Masilo — have tended to provide a specific take on the tale that departs substantially from tradition.

Mr. Preljocaj has opted for something in between. He uses Tchaikovsky’s great score, with a few electronic music interpolations and extracts from other works, including Tchaikovsky’s Second and Fourth Symphonies. He more or less sticks to the narrative: The young Prince Siegfried (Laurent Le Gall), at odds with his destiny and longing for some form of transcendence, falls in love with Odette (Clara Freschel), a princess who has been transformed into a swan by von Rothbart, an evil magician. But Mr. Preljocaj’s world is a contemporary one, and Rothbart (Antoine Dubois), as he is called here, is a leather trouser-wearing, brutish property developer whose evil, world-dominating plans are supported by Siegfried’s parents. (In the traditional version, the prince has only a mother, but here he has a father, too, played with melodramatic, slicked-hair villainy by Baptiste Coissieu.)

These ideas are clumsily set out in the opening act, with architectural plans brandished by the king and Rothbart and a model of a futuristic city wheeled about. How the prince could thwart these plans and why he needs to be seduced by Odile, Rothbart’s daughter, is never clear; nor are the origins of Odette’s metamorphosis into a swan. We only see her being attacked by Rothbart and his henchman at the beginning.

Vestiges of the traditional “Swan Lake” remain, though sometimes without enough context to make sense: courtiers perform incessantly for one another, despite no allusions to the prince’s birthday and a later ball; Siegfried and Odette get their requisite pas de deux; there is even a dance for the four little swans.

The rather murky plot is amplified by a backdrop of hyperactive video projections by Boris Labbé. Abstract shapes that could be clouds, birds, snow — or, when Odette is captured, a Death Eater-like face — morph and mutate. At other times, there are New York-like skylines and rain-streaked windows. The scenic design’s palette is gloomily black, white and gray, a dystopia in which even the moonlit lake where Siegfried discovers Odette is swallowed by buildings and machinery.

Mr. Preljocaj presents the ballet propulsively, with no intermission and a crisp, precise movement vocabulary that combines the elongated lines of ballet with the flattened planes and multidirectionality of Merce Cunningham’s choreography, as well as a low, grounded center of gravity.

The performers are all excellent, yet the choreography makes individual characterization difficult. Everyone dances with sharp, clean-cut slashes of leg and arm in geometrically perfect lines, gesturing with manic precision. Occasionally, Mr. Preljocaj slows this down for clustered groups moving as one. (His take on the “Spanish Dance” is an ingenious example.)

The ballet is most successful in the so-called white acts, in which 16 swans, here costumed in lovely crumpled tutus by Igor Chapurin, move with nuanced, fragile physical poetry, and a sense of the wounded souls they have become. During the fourth act, in many productions an anticlimactic coda, they wheel and circle in furious formation, driven by despair that feels true to the story; they are now condemned by Siegfried’s betrayal to remain swans forever.

In the final moments of Mr. Preljocaj’s production we see their demise, and Siegfried left clasping Odette’s lifeless body. Video projections behind them show the futuristic buildings that have risen up beginning to collapse in clouds of dust and rubble. It’s not just love that doesn’t survive in this “Swan Lake,” but the world itself.