LONDON — A bright red curtain flutters down. Prokofiev’s ominous chords thunder. The blood-drenched lovers lie entwined on a tombstone. Matthew Bourne shows us the end of the story at the beginning of his powerful, dark “Romeo and Juliet,” which opened at Sadler’s Wells here on Friday. And it’s not a pretty sight.

This “Romeo and Juliet” — the latest in Mr. Bourne’s genre-bridging adaptations of classics like “Swan Lake,” “Sleeping Beauty,” “Car Man” and “The Red Shoes” — doesn’t offer the consolations of sumptuous Renaissance period costuming and décor, the ribald whores and riotous crowds so familiar to dance audiences from ballet versions of the Shakespeare tragedy. Instead, he sets the story in the white-tiled, stark environs of the Verona Institute, populated by teenagers who are strictly policed by guards and medics.

Mr. Bourne brilliantly evokes a world in which the young inmates are patrolled and controlled through medication and punishment, their rigidly synchronized movement underlining their lack of freedom. Lez Brotherston’s simple set emphasizes their incarceration further: a white semicircle with three doors, framed by staircases and a balcony, all enclosed by white fencing.

Juliet (Cordelia Braithwaite) is red-haired and intense, preyed upon and eventually raped by the brutal guard Tybalt (Dan Wright, scarily large and tattooed). Romeo (Paris Fitzpatrick, touchingly fragile) is the twitchy, troubled son of Senator and Mrs. Montague, who are extremely keen to wash their hands of their embarrassing child.

Romeo is hustled into his regulation white sweats by Mercutio and his boyfriend Balthasar, and Benvolio, who form a cavorting trio. (On Friday, Reece Causton, in the role of Mercutio, was injured early on in the show, which had to be halted while his alternate, Ben Brown, rushed to the theater and continued the performance with aplomb; bravo.) This bond among the boys, and its homoeroticism, is one of several instances in which Mr. Bourne nods to ballet versions of “Romeo and Juliet,” particularly the one by Kenneth MacMillan. 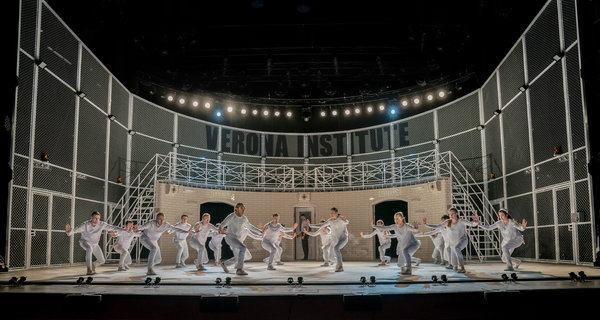 As in that ballet, Romeo and Juliet meet at a dance governed by strictly regulated social behaviors and power structures, organized here by the kindly Rev. Bernadette Laurence (Daisy May Kemp), a jolly hockey-sticks version of Shakespeare’s Friar Laurence. And their first rapturous, floor-rolling, limb-entwining, passion-dazed duet — which contains what may be the longest, most acrobatic kiss ever sustained while dancing — finds an intensity equal to the great balcony scene pas de deux.

But in Mr. Bourne’s “Romeo and Juliet,” there are no warring families or feuds to propel the action and the eventual tragedy. Instead there are other forces, particularly resonant ones: mental health and sexual harassment.

Tybalt’s rape of Juliet triggers the chain of disasters. When he later stumbles drunkenly upon the lovers, and betrays his feelings for Juliet, he is mocked by the adolescents. Enraged and humiliated, he pulls out a gun. Mercutio is killed in the fracas, then Tybalt is strangled by the group, with Romeo left to take the blame. The narrative suspense and urgency of these scenes, and the drama of the two men’s deaths to Prokofiev’s thundering drum beats, is astounding theater from Mr. Bourne, offering blazing energy from his terrific cast. (Joining his company, New Adventures, are six pre-professional dancers.)

“Romeo and Juliet” should be a hit for Mr. Bourne. His scenic and choreographic economy of means, wit and detail of movement, skillful deployment of the Prokofiev score (the order of its numbers rearranged) — all are astonishingly good.

But without exterior agents to propel the plot, and with the variables of mental trauma as motivation, the greater resonances of Shakespeare’s tragedy are sacrificed. There is no real causality between the deaths of Mercutio and Tybalt and the deaths of Romeo and Juliet, no sense of the everlasting inability to let go of hatred and fear. Then, in the final scenes, Mr. Bourne takes a disconcerting departure from Shakespeare that changes our sense of the story from tragedy to accident, and of the protagonists from courageous rebels to tormented victims.