There are a lot of fingerprints on “Road Show,” even beyond the ones that grub up everyday musicals.

Naturally, there are those of its authors, Stephen Sondheim (songs) and John Weidman (book). But there are also those of every director who has had his hands on it from its first reading in 1997, when it was called “Wise Guys,” through various incarnations and titles, including “Gold” and “Bounce,” as it expanded and contracted, shifted focus and shuffled its songs.

Nor have those directors been exactly unhandsy: Sam Mendes, Hal Prince and John Doyle are no wallflowers. To the story of the Mizner brothers, flailing and failing their way through early 20th-century America, they brought completely different attitudes and aesthetics, as well as actors as varied as Nathan Lane, Victor Garber, Richard Kind and Michael Cerveris. You would hardly think one show could accommodate so many contrasting visions and talents.

It couldn’t, and as such the other hand smearing our view of “Road Show” is history’s.

Fans of Mr. Sondheim — who as a songwriter but also as a dramatist has done more to reshape the musical than any other artist — fear that this may be the end of the line. Unless his much-announced adaptation of two Luis Buñuel films re-emerges from its seemingly endless doldrums, “Road Show” is the last new artistic statement we’re likely to have from the master.

And what we can see of it in the torpid semi-staged production that opened at City Center on Wednesday — basically a revival of the version seen at the Public Theater in 2008 — seems only intermittently like his work.

The genius glints through, of course; still in evidence everywhere is the way he packs insights about human nature into tight coils of words that spring open like penknives. When Mama Mizner (Mary Beth Peil) sings that her son Wilson (Raúl Esparza) is a joy despite his fecklessness — “If he had the slightest sense of shame, it would be a shame” — you suddenly see brightly into a depth of human nature.

That she sings this to her other son, Addison (Brandon Uranowitz), who is more dependable and dull, only twists the knife.

But such moments, however they may glint, emerge from a story that has become something of a palimpsest and thus something of a blur. It cannot have been easy for Will Davis, the director and choreographer of this Encores! Off-Center offering — the third and last of the season — to find a way into material that is already so overwrought. 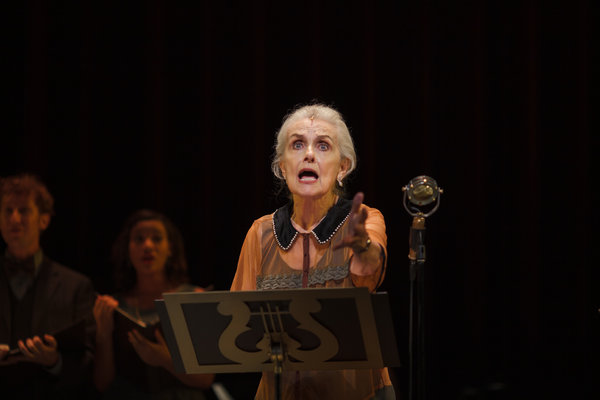 His first instinct, though, is a good one: He frames the story as a radio drama, with actors in a recording studio, speaking into mikes and making their own sound effects. The Encores! orchestra, sublime as always, plays Jonathan Tunick’s orchestrations in the same setting.

For a while, as the tale takes Wilson and Addison from their parents’ California home to the Alaska gold rush, this works well. Pruning extraneous sensory data focuses our attention on the weirdly close, quasi-incestuous but also furious Cain-and-Abel-like rivalry of these two outsized avatars of the American dream. We can savor every turn of phrase, both musical and lyrical, as it twists down into character.

But when other strands of the show’s DNA start to express themselves, Mr. Davis breaks faith with the concept. The radio show cannot accommodate the sense of spectacle built into passages like the one in which Addison travels the world “to find my road” and winds up in a travelogue of disaster. As Mr. Davis begins to give us visuals to support the narrative — picture postcards, awkward props — his frame breaks and all the overbusy contents of the story leak out.

There’s no putting it back together, either. Though there are charming moments throughout, especially when Addison finally finds nonfraternal love in the form of the rich dilettante Hollis Bessemer (Jin Ha), the exigencies of staging the picaresque tale overwhelm our interest in it.

It doesn’t help that the men’s adventures are structured as three- or four-part shaggy-dog stories: Addison dabbles as a fight promoter, then a playwright, then a racetrack fixer, all in one song. Basically you are tired of him, and the bit, after the first example, despite the bottomless wit of Mr. Sondheim’s patented wordplay.

What ultimately undermines “Road Show” is that sense of diminishing rather than increasing returns. In recent versions, and especially in this one, we don’t much care about either brother; though both sing beautifully, Mr. Esparza is seedy bad news from the start and Mr. Uranowitz a mopey mess. Nothing about their characters improves with age, which may be the point.

Fine, but this is a musical, not a treatise. Ideas about what people stand for (and what they are willing to stand) are important underpinnings of many great works, including Mr. Sondheim’s “Sweeney Todd,” which doesn’t lack for darkness.

But in “Road Show,” the portrait of America as a contest between inept dreamers and expert scammers is the whole story, relentlessly repeated. (Papa Mizner, played by Chuck Cooper, has little else to do but deliver soul-of-a-nation soliloquies.) The plot and the characterizations have been bent around the theory, instead of the other way around.

That may be why the characters we most look forward to are the ones who bear less freight as symbols: Mama and Hollis. Ms. Peil’s rendition of the song about Wilson (“Isn’t He Something!”) and Mr. Ha’s two numbers, delivered in a bright, clarion tenor, are highlights.

Alas, the story finds mother and lover no less disposable than the brothers do.

Mr. Sondheim is not only one of the theater’s great artists, he is one of its great collaborators. That can feel like a contradiction in terms, particularly when a work like “Road Show,” tirelessly revised in search of its true self, seems to be heading every way but his. What a shame that so much beautiful material was dropped like excess baggage along the way!

And yet, if he had the slightest sense of shame, it would be a shame. Even here, even now, isn’t he something!

When you purchase a ticket for an independently reviewed play or musical through our site, we earn an affiliate commission.

This information was last updated on Jul 9, 2019

Jesse Green is the co-chief theater critic. Before joining The Times in 2017, he was the theater critic for New York magazine and a contributing editor. He is the author of a novel, “O Beautiful,” and a memoir, “The Velveteen Father.” @JesseKGreen • Facebook