Barely a minute into David Cale’s “We’re Only Alive for a Short Amount of Time,” we hear about the day little David Egleton found two chickens tied to a post, “plucked semi-bald” and “smeared with poison.”

Amazingly, this is not the worst thing that happens in the harrowing play, which opened on Thursday at the Public Theater. By its end, you come to think that in comparison with David and his younger brother, who grew up in a chaotic family at the rural edge of a rough English town, the chickens got off easy.

How the innocent are abused and, in some cases, rescued — by others or, more likely, themselves — is the theme of this ultimately hopeful show, a coproduction of the Public and the Goodman Theater in Chicago.

In some ways, it is thus a transformation and culmination of Mr. Cale’s many dark, downtown works, typically told in monologue and song and from several points of view. If you’ve seen even just one or two of them, “We’re Only Alive” will serve as a kind of concordance to the characters and symbols that have populated his theatrical imagination for decades.

From “The Redthroats,” in 1986, you might recognize precursors to the new play’s avian imagery — not just those chickens but also the “bird and animal hospital” young David maintains in an old shed at the back of his house. Though it eventually transforms into an 300-bird aviary, it is sufficiently and hauntingly represented in Kevin Depinet’s minimal set design by seven cages suspended overhead.

Or if you saw “A Likely Story” in 2004, you will not be surprised to find Judy Garland popping up here as an effigy of tragedy and transcendence. Garland also figures in “The Redthroats,” as does a family called the Weirds, whose shy son and brutal father are a lot like the ones depicted in “We’re Only Alive.” And “Harry Clarke,” which starred Billy Crudup as a con man in a 2017 Vineyard Theater production, explores the same desperation for reinvention.

But unlike those previous works, in which personal themes are refracted through fiction, “We’re Only Alive” is directly autobiographical; before moving to New York at age 20 in 1979, David Egleton changed his last name to Cale.

Given the circumstances — which I won’t, in fact, give you, lest I spoil the story — the new name was necessary and a big improvement. I wish I could say the same for the new approach, which lands in the gap between drama and anecdote. It doesn’t help that Mr. Cale is often more compelling when playing other people than when playing himself. He lacks the sharklike glint Mr. Crudup brought to “Harry Clarke,” as a character who was in some ways an impersonation of the author.

“We’re Only Alive,” directed by Mr. Cale’s frequent collaborator Robert Falls, suggests why he doesn’t pop in his own self-portrait; camouflage comes naturally to those surrounded by such violently colorful characters.

David’s parents, Ron and Barbara, are both damaged souls even before their explosive marriage: Ron the son of a sadistic gangster and his ex-stripper wife; Barbara the daughter of a woman who used her as a decoy while turning tricks. As if drawn to ruin, the couple sets up housekeeping in hardscrabble Luton, a town that (according to one of the show’s numbers) always “feels like winter” and is “mocked in plays by Harold Pinter.” 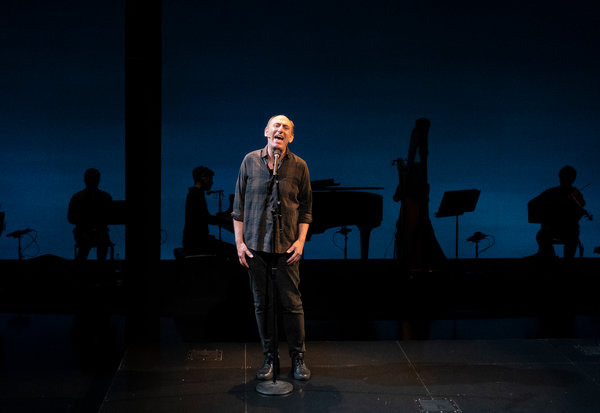 That trenchant rhyme is an outlier among Mr. Cale’s lyrics, which generally abjure technical polish in favor of imagery and emotion. The music, by Mr. Cale and Matthew Dean Marsh, is similarly rhapsodic; with a six-person orchestra accompanying behind a scrim, the dozen or so songs (or wisps of songs) about regret, alienation and even rage seem to reach for a higher plane in which disaster is transmuted into its opposite.

Though Mr. Cale’s singing voice is more feelingful than lovely, he reaches that plane fairly reliably whenever he is portraying a character. That includes himself as a schoolboy dealing with his family’s collapse; his brother, retreating into a world of model airplanes; his father, filled with furious demands and delusions; and especially his mother, who seeks to channel her creative ambition, thwarted by marriage, into her artistic son.

Under Mr. Falls’s delicate direction, Mr. Cale makes complicated creatures of them all. Though Barbara is the sympathetic center of the story, she is not sanctified, nor is Ron merely a caricature of thuggishness. The children are not honey-glazed in innocence but spiky and defiant even as they evoke pity. The variety of colors Mr. Cale is able to wring out of his voice as he sketches them in song is remarkable.

Yet as David Egleton turns into David Cale and the story rushes into the present, the tension inevitably slackens. (Narrators are seldom as interesting as the characters whose stories they narrate.) And when a play about terrible family events becomes a can-you-top-this portrait of the artist as a young man, something has gone wrong with the tone. One sign of the problem is that the audience keeps laughing uncertainly long after things turn tragic.

The result, though smart and moving, is also unsatisfying, leaving you to question whether finding one’s voice — in this case literally — is a form of redemption or revenge.

Maybe that’s how Mr. Cale likes it; he’s certainly had time to change it if not. After various developmental workshops and productions over the past two years, including at the Public’s Under the Radar festival in January 2018, “We’re Only Alive” had its official world premiere at the Goodman in September.

But rescuers never stop trying to rescue. What Mr. Cale is doing here, with his own life, is merely what he did in his animal hospital with baby birds who’d fallen from the nest. His method of resuscitating them, by breathing warmly on their feathers, worked (he tell us) “almost every time.” How nice if we could all be resuscitated so reliably.

We’re Only Alive for a Short Amount of Time

We’re Only Alive for a Short Amount of Time

When you purchase a ticket for an independently reviewed play or musical through our site, we earn an affiliate commission.

This information was last updated on June 27, 2019

Jesse Green is the co-chief theater critic. Before joining The Times in 2017, he was the theater critic for New York magazine and a contributing editor. He is the author of a novel, “O Beautiful,” and a memoir, “The Velveteen Father.” @JesseKGreen • Facebook