Robert Therrien, whose lifelong fascination with household objects like tables and chairs and pots and pans led him to recreate them as colossal sculptures, died on June 17 at his home in Los Angeles. He was 71.

The cause was cancer, said Dean Anes, the liaison to Mr. Therrien from the Gagosian Gallery, which represented him.

It was in the 1970s and ’80s that Mr. Therrien began drawing and sculpting generic things familiar to him from childhood: snowmen, keyholes, a coffin, a bird, a chapel, a hat on a stand. Those modest-size, Minimalist works yielded in the 1990s to larger, more daring sculptures that toyed with perspectives of dimensions and space while adhering to realism.

For his best-known work, “Under the Table” (1994), he reproduced his dining room table in comically huge dimensions. At 10 feet high, 20 feet long and 12 feet wide, the table (and six chairs) is fit for a gathering of giants. 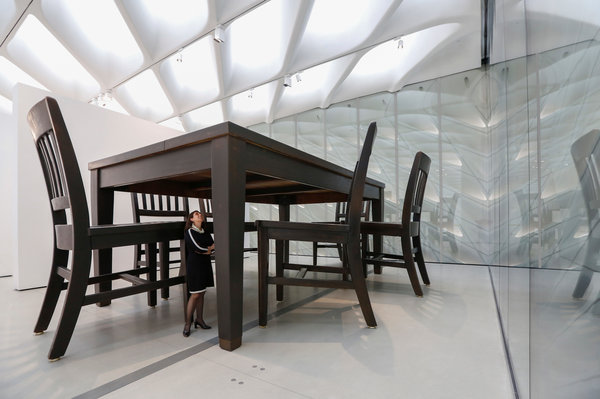 By making the table so large, Mr. Therrien seemed to render its viewers small while shifting their attention to what is beneath the table as they gaze upward.

Reviewing a Therrien solo exhibition in 2008 at the Gagosian Gallery in Manhattan that included “Under the Table,” the critic Jeffrey Kastner wrote in Artforum: “Everyone, at some point in his or her childhood, sought refuge (for real or for fun) beneath the canopy of a table, and the disorienting mix of security and infantilization that this work produces” leads to a “surprisingly powerful bit of sculptural memory theater.”

For another work, Mr. Therrien stacked four-foot-wide dishes nearly eight feet high in such a vertiginous way that they appear ready to tumble. In still another he piled oversized pots and pans, seemingly willy-nilly, into a stack nine feet high. Each work was secured by a metal spine that held the objects in place.

Transforming ordinary objects, like a table, into three-dimensional worlds proved a tantalizing challenge for Mr. Therrien.

“The reason the table became big was because I asked, ‘What if people could walk into an environment like that?’” he said in an interview with The New York Times in 2013, when the Albright-Knox Art Gallery in Buffalo mounted an exhibition of his sculptures.

Mr. Therrien was perhaps an heir to Claes Oldenburg and his humorous giant Pop Art sculptures. But with his more rigid attention to detail, Mr. Therrien, typically grim-faced in photographs, was more of a realist, as shown in his recreation of an eight-foot-high folding table and chairs in 2007.

When the sculpture was included in an exhibition of hyper-real works at the Walker Art Center in Minneapolis in 2012, the museum’s senior curator of visual arts, Siri Engberg, said: “To see how an artist elevated the mundane to the monumental was a showstopper and a head scratcher. What was fantastic was that it was not only gargantuan but totally functional. The legs fold like a card table’s.”

Robert Edward Therrien was born on Nov. 17, 1947, in Chicago and moved with his parents to Palo Alto, Calif., where he sought treatment for asthma. He began to draw, mostly from comic books, as a boy. “I always remember thinking I was some sort of artist,” he told The Los Angeles Times in 2000, “then becoming obsessive about it as a teenager.”

He attended what is now the California College of the Arts in Oakland before studying photography at the Brooks Institute in Santa Barbara and painting at the affiliated Santa Barbara Institute. After earning a master of fine arts degree from the University of Southern California in 1974, he started working from a loft in Los Angeles, making wall reliefs and small sculptures.

Photography led him to create his big, realistic sculptures, most notably “Under the Table.” He drew on Polaroid pictures he had taken of his dining table to rethink it as “an interior with a complexity of horizontals and verticals and diagonals,” he said, “so that it would be like being in a jungle of legs.”

Mr. Therrien did not work only in Gulliver sizes. He also examined the relationship between objects and their environments in a series of smaller, carefully staged spaces, or rooms. His “Transparent Room” (2010) is a stand-alone glass house filled with transparent materials like Bubble Wrap rolls and plastic hangers and garbage cans.

Another work, “Red Room” (2000-2007), is a storeroom packed tightly, almost obsessively, with 888 red objects, including shoes, lanterns, sweaters, bricks, spray cleaners, kitchen utensils, a radio, a clock and a steamer trunk. Together they seem to fuse into a single red entity.

Mr. Therrien’s work is in collections worldwide, including those of the Museum of Modern Art and the Whitney Museum of American Art in New York, the Centre Pompidou in Paris, the Museum of Fine Arts in Boston and the Broad in Los Angeles.

He is survived by a brother and sister.

One of Mr. Therrien’s final works — two stylized frying pans, cast in bronze, hanging from a painted shelf — was part of a solo show last spring at the Gagosian Gallery in San Francisco.

“How silly, one might think, to lavish the care required to remake iron kitchenware as a slightly sleeker version of itself,” the critic Charles Desmarais wrote in The San Francisco Chronicle. “Unless, of course, what is molded is not metal but memory.”

Richard Sandomir is an obituaries writer. He previously wrote about sports media and sports business. He is also the author of several books, including “The Pride of the Yankees: Lou Gehrig, Gary Cooper and the Making of a Classic.” @RichSandomir