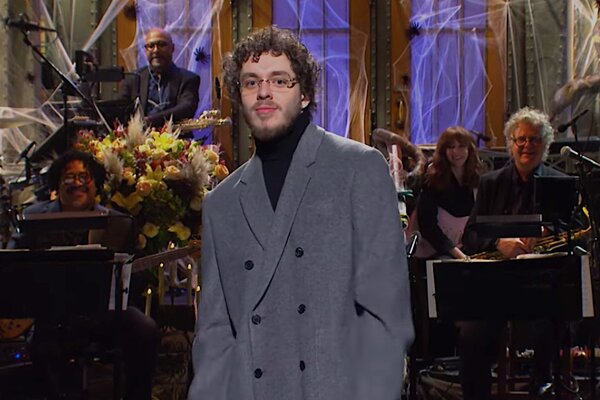 The rising fortunes of some Republican candidates with no previous electoral experience allowed “Saturday Night Live” to try out some new (or newish) political impressions in its opening sketch this weekend.

The broadcast, on which the rapper Jack Harlow was both host and musical guest, began with a parody of “PBS NewsHour,” with Heidi Gardner playing the anchor Judy Woodruff. “We’re what your grandma is talking about when she says, ‘I saw this on the news,’” she explained.

Introducing three Republicans who are running for office this November, she began with Kenan Thompson, who played Herschel Walker, the Senate candidate from Georgia. “Hello, Judas,” he said. “My name is Herschel Walker, Texas Ranger, and I am running for president of the United Airlines.”

Mikey Day played Dr. Mehmet Oz, a Senate candidate in Pennsylvania, who has been criticized for a lack of familiarity with the state. “My Pennsylvania Phillies are in the World Series and I just had a delicious Philadelphia cheese and steak,” he said. “Yum.”

And in her first “S.N.L.” appearance this season, Cecily Strong played Kari Lake, the candidate for governor of Arizona. “Great to be with you, Judy, on your sweet little show full of lies,” she said.

Asked how he’d been able to maintain his popularity despite several scandals, Thompson replied, “The whole world is a mystery, ain’t it? For example, a Thermos. It keeps the hot things hot, but also the cold things cold. My question is: How do it decide?”

Or perhaps it was because voters thought he was fun, Thompson said: “Look, if you want to get on a Jumbotron at the Packers game, you don’t throw on a cardigan and start making sense. You take your shirt off and shake your belly around. That’s what I’m doing and people love me.”

Day said that his candidacy was initially perceived as a long shot. But, he added, “I always told myself, you can win this election if you’re honest, if you’re fair and if your opponent has a debilitating medical emergency. So we’re very lucky.”

Strong said her strength with voters was her normalcy.

“I’m just a regular hometown gal, constantly in soft focus and lit like a ’90s Cinemax soft-core,” she said. “And frankly, I’ve just clicked with many of the wonderful, terrified elderly people here in Arizona, the Florida of the West. Also, I’m a fighter. In my life, I’ve sent back over 2,000 salads and I’m not afraid to do the same thing with democracy.”

Asked if she would implement electoral reforms if she won, Strong answered, “I’ll make it easy. If the people of Arizona elect me, I’ll make sure they never have to vote ever again.” She added, “Look, nothing I say can be incendiary because I say it in TV voice. So jump on into Kari Lake, Arizona, because it’s placid and serene on top, but underneath, it’s a whole lot of giardia.”

In a run that would come later on Weekend Update, the anchor Colin Jost riffed on the last remaining businesses, including Dippin’ Dots, Scrub Daddy and TCBY, that could still cut ties with Ye (the rapper formerly known as Kanye West) for his antisemitic statements. But “S.N.L.” also made hay from a real-life incident earlier this week in which Ye made an unannounced trip to the headquarters of Skechers and was thrown out of the building.

In this fake commercial, Skechers employees can’t quite decide between wondering what it might have been like to work with Ye or embracing the minimal amount of cred they’re finally enjoying for turning him away. While Ye may have been known as a fashion-industry disrupter, “we invented shoes you can wash in a washing machine,” Marcello Hernandez said proudly.

12-Step Meeting of the Week

There were a lot of head fakes in “S.N.L.” this week — like, say, following the monologue with a sketch about a Halloween wedding where the best man has dressed as the Joker. Or take this segment that starts off as what appears to be an Alcoholics Anonymous-style recovery meeting, but which quickly becomes the setting for Harlow’s character to pitch the concept for a Pixar movie about anthropomorphic suitcases that travel the world.

And when you think the sketch has peaked with a spontaneous singalong of the would-be movie’s feel-good theme song, who should show up to voice its main character but America’s sweetheart and multiple-time “S.N.L.” host Tom Hanks. (And if you’re wondering whether Hanks’s reappearance on a Halloween episode meant he was going to bring back David S. Pumpkins, yes, he brought back David S. Pumpkins.)

Fake Movie Trailer of the Week

In keeping with the spooky spirit of this episode, “S.N.L.” spun a trailer for an ersatz horror movie that claimed to be a collaboration “from the producers of ‘Smile’ and the twisted minds of ‘Morning Joe.’”

As its various characters contemplate all the reasons they would not want to see President Biden run for re-election — they worry he would be too old or vulnerable to easy attack ads — they find themselves just as unenthusiastic about the potential candidates that could replace him, an overly familiar roster that includes Kamala Harris, Pete Buttigieg, Bernie Sanders and Hillary Clinton. The terrifyingly simple title: “2020 Part 2: 2024.” (Coming in 2023.)

Weekend Update Jokes of the Week

Over at the Weekend Update desk, the anchors Colin Jost and Michael Che riffed on Elon Musk’s takeover of Twitter and the emergence of another accuser who said Walker had pressured her to have an abortion.

This week, Elon Musk officially bought Twitter for $44 billion. Beating out the next highest offer of $0. Musk sent an open letter to advertisers saying that he doesn’t want Twitter to become a free-for-all hellscape. Because that’s his plan for Mars. I honestly don’t understand why people are so worried that Elon is going to ruin Twitter as if it’s this beloved American institution. It’s not like he bought Disneyworld. It’s like he bought the rest of Orlando.

Herschel Walker denied allegations from a second woman that he pushed her to have an abortion, saying, “I’m done with this foolishness.” Which is also what Walker says when he takes off the condom. The woman claimed that Walker drove her to an abortion clinic, then waited in the parking lot for hours while she had the procedure. Not only that, while he was in the parking lot, he got two more women pregnant.