Sometimes you get a ward and isolate her for years, grooming her to be your naïve bride against her will, and in the end, all you have to show for it are canceled nuptials and a whole lot of headaches. Don’t you just hate when that happens?

Cuckoldry is the theme of Molière’s “The School for Wives,” the livestreamed French farce du jour, whose charms are all in the design instead of the performance. The play is presented by Molière in the Park and the French Institute Alliance Française, and in partnership with the Prospect Park Alliance, LeFrak Center at Lakeside and Theatre for a New Audience.

The Tony-award winner Tonya Pinkins leads an all-female cast as Arnolphe, a control freak who resolves to avoid all the boring, troublesome parts of a mature, adult relationship — trust, intellectual engagement, independence, agency — by marrying 17-year-old Agnès (Mirirai Sithole), whom he has raised to remain ignorant for that very purpose. But when Agnès is courted by a dashing young suitor named Horace (Kaliswa Brewster) and shows she’s not as dumb and obedient as Arnolphe would like, he schemes to thwart the romance between the two lovebirds and regain possession of his intended wife.

The follow-up to Molière in the Park’s piquant livestream of “Tartuffe,” “The School for Wives,” directed by Lucie Tiberghien, has noticeably less pluck. Molière’s text, translated by the poet Richard Wilbur, bounces with comic end rhymes, but in a play that so firmly adheres to a predictable formula, it occasionally feels exhausted, in need of a bit of trim and tuck. 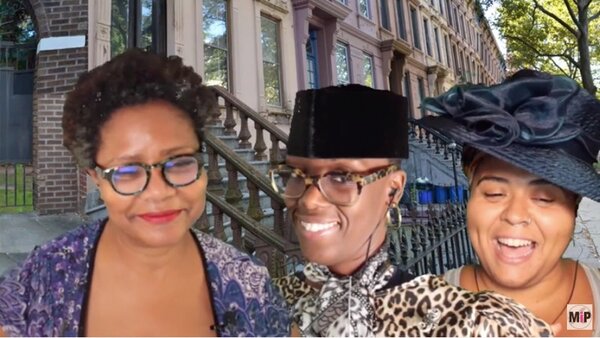 The production’s female casting plays well with Molière’s arch satire — the story of a man’s attempted dominion over a woman in his care and his ultimate failure looks even more ludicrous when every male character appears as a woman. But, unfortunately, the performances often stumble; the actors lack chemistry, from their separate screens (yes, chemistry can transcend even Zoom windows), and the deliveries feel noticeably unpolished, as the performers either step on each other’s lines or lose the flow of the dialogue in awkward pauses.

Pinkins appears stiff in her digital environs, but Mirirai Sithole serves a bright, wide-eyed Agnès and Carolyn Michelle Smith, in brief roles as a notary and Horace’s father, provides some much-needed snap.

Still, Lina Younes’s set design — portraits of New York City streets and backyards, in vivid color — is captivating to look at, but only when the rest of the visual effects (the floating heads and shoulders of characters overlapping; the heads of the actors awkwardly placed on animated bodies) don’t get in the way.

When it comes down to its style and satire, “The School for Wives” doesn’t slouch. As for the rest, the production could use more of an education.

The School for Wives Livestreamed performances on Oct. 24. Available on YouTube through Oct. 28 at 2 p.m.; moliereinthepark.org