“No one should have to discuss health care with their local political leaders, especially if you live in one of those really small towns where the local mayor is a dog,” Colbert said. 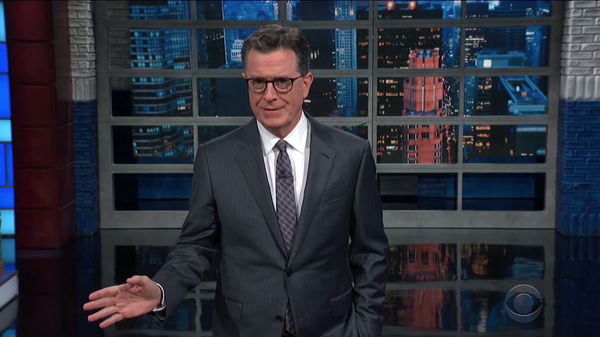 Welcome to Best of Late Night, a rundown of the previous night’s highlights that lets you sleep — and lets us get paid to watch comedy. Here are the 50 best movies on Netflix right now.

On Wednesday’s “Late Show,” Stephen Colbert joked that Mehmet Oz had already faced some obstacles as a Senate candidate in Pennsylvania: “For one thing, he lives in New Jersey.”

In his monologue, Colbert said the candidate, a former talk show host also known as Dr. Oz, had “accidentally said what he meant” about abortion in his Tuesday debate with Lt. Gov. John Fetterman. Oz said the federal government should stay out of the issue, which he said should be left to women and doctors — and, he quickly added, “local political leaders.”

“Oh, so close! No one — no one should have to discuss health care with their local political leaders. Especially if you live in one of those really small towns where the local mayor is a dog. ‘Making this decision was ruff. But I believe life begins at — squirrel!’” — STEPHEN COLBERT

“Dr. Oz said abortion rights should be decided by women and their doctors and local political leaders, which is pretty slick, right? Because he started that sentence like he was on the side of women, then he snuck in the politicians at the end like a teenager buying condoms at the gas station.” — TREVOR NOAH

“I think we can all agree there is only one politician who should have a say in your abortion and that’s Herschel Walker, because it is his. It’s his. It’s probably his. Ladies, check, they’re all his.” — TREVOR NOAH

“Wait a second — didn’t we do this story already? Am I in a rerun right now?” — STEPHEN COLBERT, on another allegation that Walker, a candidate for the Senate in Georgia, had asked a woman to have an abortion

“At this point, the only athlete who would be dumb enough to sign with Donda Sports is Herschel Walker.” — JIMMY KIMMEL, referring to Kanye West’s marketing agency

What We’re Excited About on Thursday Night

Tegan and Sara will perform a track from their new album “Crybaby” on Thursday’s “Tonight Show.”

Josh Nalley posted videos of himself playing dead on TikTok. It led to a role as a corpse on “CSI: Vegas.”