The most recent scandal to shake Italian politics centres around two men: Italy’s far right deputy prime minister Matteo Salvini and his long-time trusted aide Gianluca Savoini. Here they are enjoying the sights and sounds of Red Square in 2017. That’s Salvini on the left. 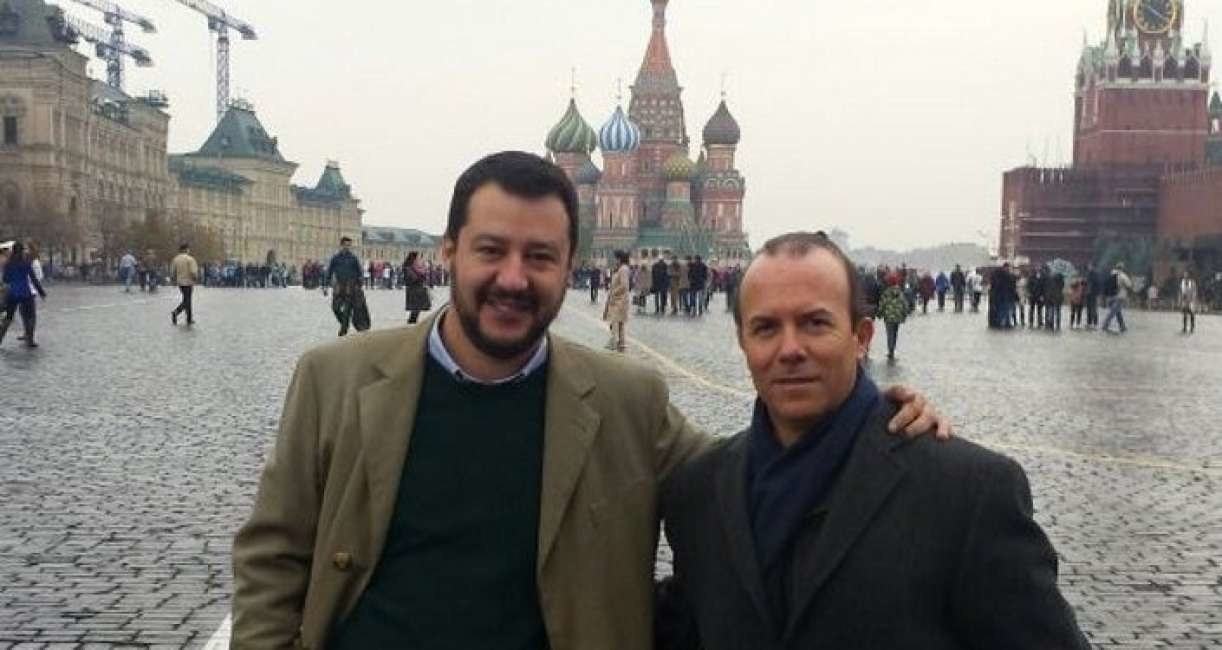 This week, BuzzFeed News released details of a secret tape revealing how Savoini met with two other Italians and three Russians last year to talk about a proposed deal to covertly channel tens of millions of dollars of Russian oil money to Salvini’s far-right Lega party.

Following publication of the story, which sparked protests against Salvini from opposition MPs in the Italian parliament, public prosecutors in Milan announced on Thursday that they were investigating whether any crimes were committed during the meeting in Moscow in October where the proposed deal was discussed. According to multiple reports in Italian media, Savoini is the focus of that investigation.

Now, with Savoini’s name all over the Italian media, Salvini and Lega’s response has been to try to distance themselves from the man widely described as Salvini’s “sherpa to Russia”.

One problem: There’s a long trail of photos, videos and social media posts stretching back many years, which point to the closeness of their relationship. 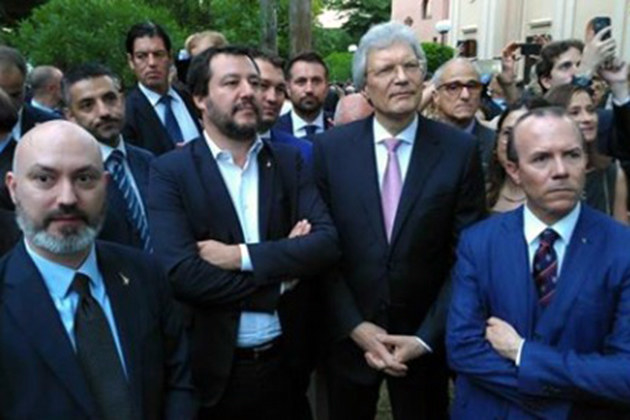 In response to a question about Savoini’s presence during an official trip to Moscow last July, which included a private meeting with the Russian interior minister, Salvini told reporters at a press conference on Friday that he didn’t know why Savoini was there.

“Ask him, I’m the interior minister and focussed on important matters,” Salvini said.

Also, a spokesperson for the Italian deputy prime minister told an Italian newspaper that “Gianluca Savoini has never been part of the minister’s official delegations to Moscow.”

But, here is a photograph posted on social media by Salvini during that official trip to Moscow last July. Circled in red, meeting with the Russian interior minister, Vladimir Kolokoltsev, are Salvini and Savoini. 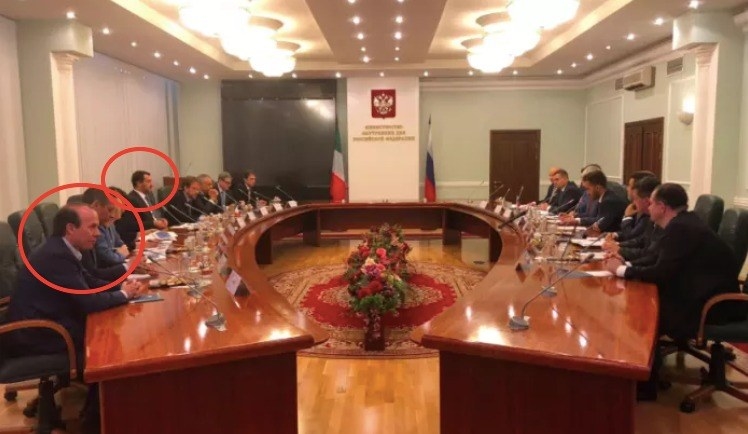 “It was for me an enormous pleasure to accompany Minister Matteo Salvini during the course of his official visit to Moscow,” Savoini tweeted after that very same meeting.

Asked about the many photos he appears in next to Savoini, Salvini told a radio programme on Friday morning: “I go around with hundreds of people. What they do and ask on their and others’ behalf is none of my business.” 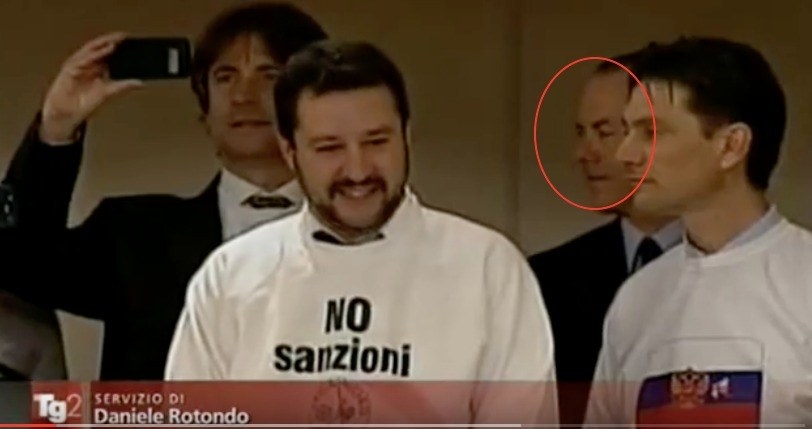 Here is that same photo of Salvini and Savoini in Moscow in March 2017 with hundreds of other people in Red Square. 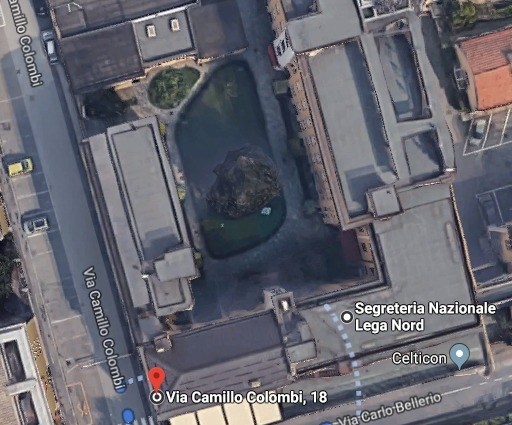 Lombardy-Russia’s honorary chair is Alexey Komov, the Russian representative of the World Congress of Families, a global “pro-family” movement that fights against LGBT and abortion rights.

He spoke at the party’s congress in 2013, the year Salvini was elected party leader. “We are your brothers in Russia. We support your values,” Komov told the Lega faithful. “This [is] our common Christian European values.”

Days after the Metropol meeting — that one where the Russian oil deal was proposed — Savoini attended a United Russia conference.

He tweeted: “I met the secretary of the party’s foreign relations, senator Andrey Klimov, who underlined how thanks to Salvini, Lega and Lombardy-Russia, Italy is a primary partner for Moscow.”

And just last week, Savoini even popped up at an official reception in Rome for President Putin. 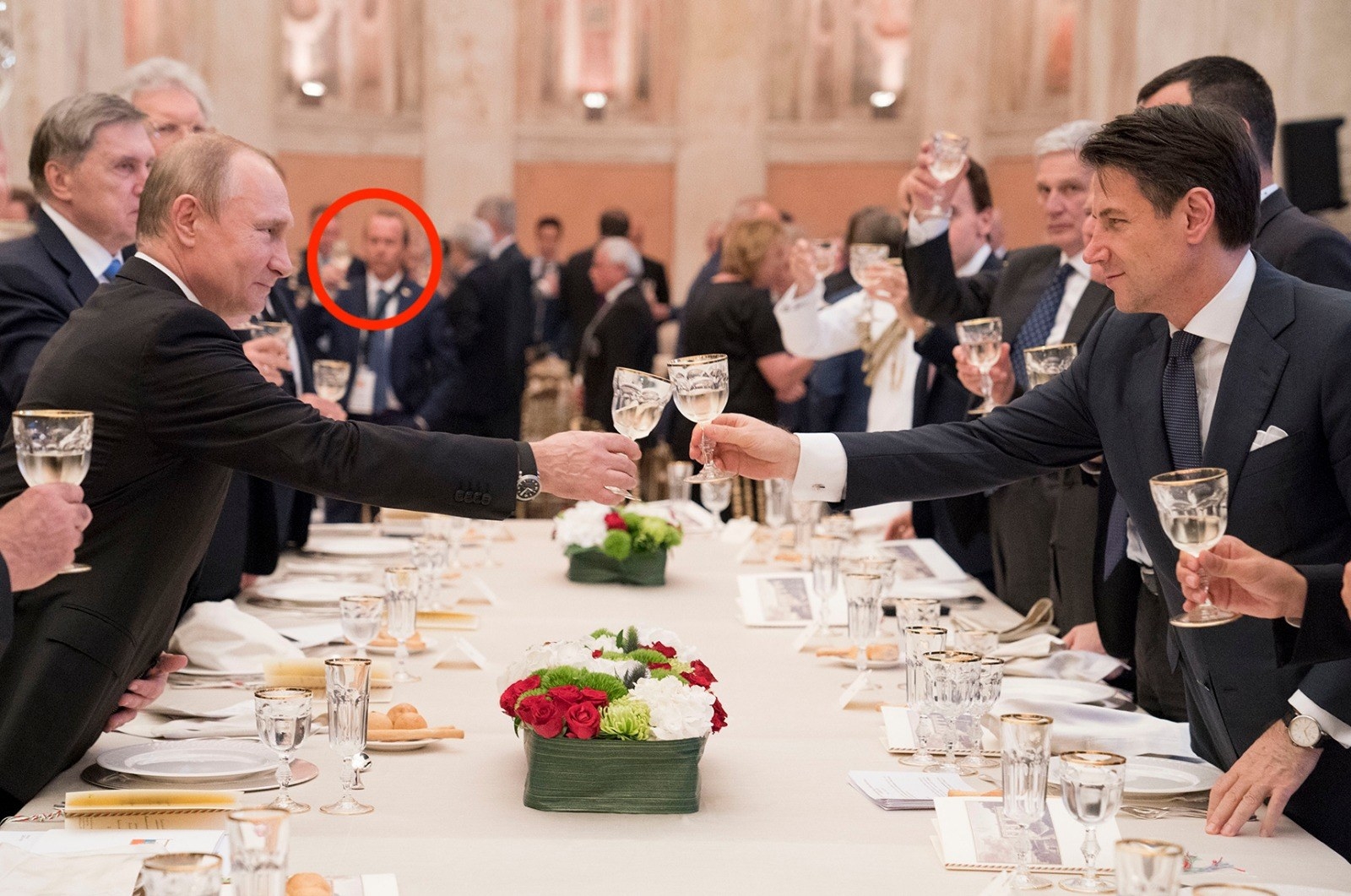 Salvini, who was also at the reception thrown by Italian prime minister Giuseppe Conte, was asked this week why Savoini was there. He didn’t know, he said.

Reporters asked Conte why Savoini had been invited to the Putin meeting. Conte’s somewhat cryptic response was that some guests had been “autonomously invited.”

But at least Savoini enjoyed himself. Here’s a video he posted from the dinner of Putin, with Salvini in the background.