Welcome to the T List, a newsletter from the editors of T Magazine. Each week, we’re sharing things we’re eating, wearing, listening to or coveting now. Sign up here to find us in your inbox every Wednesday. And you can always reach us at [email protected].

The Coffee Shop That Doubles as a Tailoring Studio 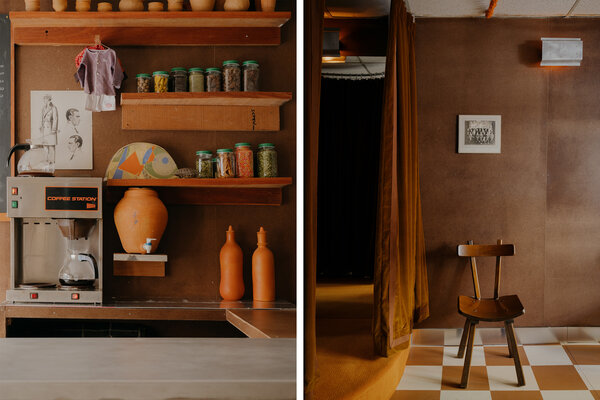 Carmine Morales ran the tiny, locally beloved luncheonette Classic Coffee Shop — one of the few remaining places in downtown New York where you could get a truly no-frills grilled cheese — on Hester Street for over 40 years before deciding to retire last December. But he has entrusted the storefront, along with his decades-old drip coffee machine, to two new tenants: the clothing designer Emily Adams Bode and her partner, the furniture designer Aaron Aujla, who will keep it running in service to the neighborhood, if in a slightly different way. The couple have spent the past few weeks subtly reimagining the space as a hybrid coffee and tailoring shop, leaving the Styrofoam ceiling tiles in place but updating the counter at the front with vintage ’60-era teak stools from India and adding bent-metal sconces by Green River Project (the studio Aujla runs with his collaborator, Ben Bloomstein). At the back of the space, they’ve installed a bank of sewing machines, along with a plush changing area enveloped by a thick tobacco-colored velvet curtain. The flagship store of Bode’s namesake clothing brand, which offers one-of-a-kind pieces handmade from repurposed textiles such as vintage quilts and bed linens, is just next door, and she has long believed that garments should be altered and maintained over a lifetime. Offering a dedicated location for tailoring felt like an obvious next step. “I think it will open some of our clients’ eyes to the fact that it’s easy to shop in a way where there aren’t limitations based on size,” she says. But the space, which will open on Friday, is also intended as a resource for anyone with a textile conservation project or simple alteration need: “People can bring their grandmother’s saris but also their Levi’s jeans.” The Classic Coffee Shop was a family operation — it was Morales’s father who originally took over the space in 1976 — and Bode and Aujla will build on this tradition by weaving in their own personal histories: The coffee will be mixed with cardamom, just as Aujla’s grandmother served her Folgers after she moved from Punjab to Canada in the 1950s, and he eventually plans to offer Indian sweets, including jalebi and laddus. “But nothing fancy,” he says. Bode Tailoring Shop, 56 Hester Street, New York, 10002.

In Portugal, a Hotel Promising the Best Night’s Sleep

In the heart of central Portugal, near the Biblioteca Joanina, the University of Coimbra’s 18th-century Rococo-style library, is a new boutique hotel that will open in May from the storied Swedish bedding brand Hästens whose mission is to provide guests with one of the world’s best sleep experiences. Each of the 15 rooms at the Hästens Sleep Spa comes equipped with one of the company’s triple-spring beds, which were carefully designed for optimal pressure, relief and support, while portions of its walls are adorned with decorative gold-plated marble that’s been hand-carved to resemble book spines. During a stay, guests can select an actual book from any number of shelves spread throughout the hotel to take with them when they turn in for the night. There is also an array of digital programming that helps create a soothing ambience, including relaxing soundtracks available through a mobile app and an in-room television channel called “Bed Talks,” hosted by the sleep expert Dr. Edie Perry, who shares insights on topics such as how to position one’s neck for quality rest and how best to support the lumbar spine throughout the night. To top it off, guests have access to an on-call sleep specialist for the duration of their stay and can select from a pillow menu of five options, all made from goose feathers and down and ranging from soft to extra firm. Because of the pandemic, Hästens Sleep Spa will open its doors to guests in May. Rooms start at $599, cbrboutiquehotel.com.

Colorful Wallpaper Inspired by the Horizon

When Calico Wallpaper founders Rachel and Nick Cope designed their Aurora collection, consisting of 16 different multicolored ombrés, in 2013, they drew on memories of the various horizons they’d seen on their extensive travels — from seascapes in Tulum to sunsets in Tuscany. Stuck in their New York home last year, the couple found a new way to bring a global perspective to their work: They invited four international design studios to craft their own Aurora prints, each one just as personal as the originals. Launching this week, the new series — called Dawn — includes the Swiss designer Ini Archibong’s cotton candy-like pink-and-teal version, inspired by walks taken with his young daughter along the shore of Lake Neuchâtel in Romandy, and a dark blend of yellow and blue by the Shanghai-based duo Lyndon Neri and Rossana Hu of Neri & Hu that references their favorite Vermeer paintings. Milan’s Dimore Studio chose a moody brick-red fade “that conjures the feelings of a smoke-filled lounge in the 1970s,” says Rachel, while Sabine Marcelis captured the orange-gray sky that can be seen from her studio in Rotterdam, the Netherlands, at sundown. The couple gave their collaborators free rein, notes Rachel, and had each studio select a nonprofit organization — the U.N. Refugee Agency and the Environmental Defense Fund are among those chosen — to receive 5 percent of the proceeds from its design. $28 per square foot, calicowallpaper.com.

A Nancy Holt Exhibition Opens at an Irish Castle

Work by the pioneering American land artist Nancy Holt — perhaps best known for “Sun Tunnels” (1973-76), a series of four concrete cylinders that are each 18 feet long and 9 feet in diameter, and are installed in aeternum in Utah’s desert flats — will be on display, beginning this week, at Ireland’s Lismore Castle Arts. Curated by Lisa Le Feuvre, the executive director at the Holt-Smithson Foundation, which upholds the legacies of both Holt and her husband, the artist Robert Smithson, “Light and Language” explores Holt’s output between 1966 and 1982 and includes indoor and outdoor installations, as well as photography and film. (There will also be a selection of pieces by five other artists, all of whom see their work as being in conversation with Holt’s: A.K. Burns, Matthew Day Jackson, Dennis McNulty, Charlotte Moth and Katie Paterson.) For Le Feuvre, the exhibition’s setting will be crucial to how it’s experienced: It’s “like going to see ‘Tunnels,’” she says, in that “you get a sense of slowness, quietness and localness.” But Lismore Castle, a winding hour-and-a-half drive from Cork, sits in stark contrast to the empty vistas of the American West. The property dates back to 1185, and some believe its gardens — which will frame several outdoor works by Holt, including “Locator P.S.1.” (1971), a kind of prototype for “Tunnels” — to be the country’s oldest. Also on view will be “Electrical System” (1982), a constellation of 80-plus light bulbs powered by a continuous network of interlocking steel arches that the artist once described as a “fountain of electricity,” and “Boomerang” (1974), a video made in collaboration with the artist Richard Serra, and originally broadcast on live TV. The clip stars a young Nancy Holt, who at one point says, “My mind goes out into the world and then comes back.” “Light and Language” will be on view at Lismore Castle Arts, Waterford, Ireland, from March 28 through October 10, lismorecastlearts.ie.

Stylish Yet Casual Pieces From a Thoughtful Parisian Label

At some point during these last few months, I began to despise what I wore every day so much that I fantasized about burning my clothes the moment we all emerge — like butterflies from our cocoons — from lockdown. Instead, I found Baserange, a Parisian brand of basic wear that is a little more elevated and stylish than my old gym clothes and pajamas, but doesn’t sacrifice the comfort and practicality my more hermetic existence now demands. The line launched in 2012 with foundation garments, including bras without underwire. “We did not want to dictate a certain shape for breasts,” said the co-founders Blandine de Verdelhan and Marie-Louise Mogensen over email. “We felt women were placed in a very limited frame, a frame where there was little movement.” Since then, Baserange has grown to include similarly elegant ready-to-wear pieces, such as dresses, tops, bottoms and much more. All of its clothes are made with natural fibers, including bamboo and organic cotton, as both sustainability and equality are important to the company. The recently launched Tonal Collection is offered in a new palette of browns and tans intended to echo the diversity of human complexions. And small touches on its classic items, like the wide ribbing on a pair of sweatpants or an artful seam on a turtleneck, have allowed me to venture to an art gallery or an outdoor dinner at a nice restaurant without panicking that I’ve lost all sense of my sartorial self. baserange.com.