From the day he took office, Donald J. Trump had America’s historians on high alert, as they took to news programs, Op-Ed pages and social media to help contextualize every norm-busting twist and turn (and tweet).

But last Friday, a group of 17 historians sat down for a calmer, more deliberate project: taking a first cut at writing a scholarly history of the administration.

Before convening via Zoom for two days of discussion, the members had submitted chapters on topics including immigration, foreign policy, race, party politics, media, disinformation and impeachment. After revisions and editing, the work will be published next year by Princeton University Press in a volume called “The Presidency of Donald J. Trump: A First Historical Assessment.”

That might seem like an incongruously dry title for a summation of four years that ended with a violent assault on the United States Capitol. And before the discussion began, Julian E. Zelizer, a professor at Princeton and the project’s organizer, laid out a basic difficulty.

“The challenge with President Trump is understanding the foundational elements of his presidency as deeply rooted in basic features of American history,” he said, while also noting the places “where the presidency jumped the shark.”

The discussion included plenty of debate on big-picture questions. Was Trump’s victory (then loss) part of a political realignment, or an aberration? What was the role of bottom-up social movements versus top-down leadership in driving change? And how much did Trump’s personality matter?

More than one person suggested that among the norms upended (or at least seriously shaken up) was dispassionate scholarly objectivity itself. 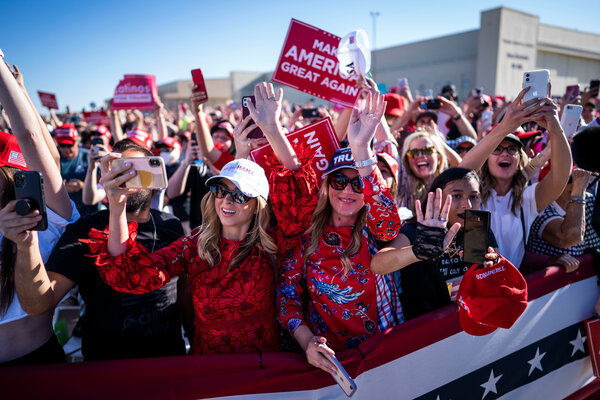 Jeffrey Engel, the founding director of the Center for Presidential History at Southern Methodist University, noted the distinct lack of “fan praise” for Mr. Trump in the liberal-leaning group’s ranks (and among history scholars as a whole). Still, he said that while reading the chapters, he had been repeatedly brought up short by sentences making bluntly unflattering judgments about the president himself.

“There were points in these papers I would read a sentence and say, “Oh my God!” said Engel, whose own chapter discussed the administration’s approach to global alliances. “But then I’d say, ‘I agree.’ The ways that we can express our own anger while still being accurate is symbolic of the unprecedented nature of this presidency.”

Four years ago, a similar group met at Princeton to prepare a volume about the Obama presidency (as one had for the Bush administration before it). That gathering took place a few days after President Trump’s election, which had left the group in shock, and sent some members scrambling to rethink parts of their analysis of the Obama years.

That this year’s gathering was happening virtually was a different reminder of the contingencies of history. Had it not been for the administration’s chaotic response to Covid-19, more than one participant speculated, Mr. Trump might well have handily triumphed in November — and this past-tense assessment wouldn’t be happening at all.

“What if Trump had won?” Michael Kazin, a professor at Georgetown University said, in response to a hypothetical thrown out by Zelizer. “I’d probably be trying to organize demonstrations rather than sitting around on Zoom.”

One thread running through the discussion was how to find the main narrative lines amid four years of near-constant chaos — including two impeachments — and parse out actual policies and on-the-ground impacts from the blizzard of President Trump’s words.

And those words, some of the scholars argued, were often as much the point as deeds. In a paper on infrastructure, Jason Scott Smith, a professor at the University of New Mexico, argued that seeing the president’s record only through the punch line of his infamous “Infrastructure Week” missed perhaps his most politically important piece of infrastructure — the border wall.

And with the border wall, he argued, what matters isn’t just what was built (452 miles of wall, he said, only 80 of which was new). “Trump’s rhetorical commitments to infrastructure, while unfulfilled in terms of physical construction,” Smith wrote in his paper, “in fact underwrote a sea change in the legal mechanisms and policing capacities of the federal government.”

That included harsh deportation and detainment policies for undocumented immigrants. And then there was the larger psychological and symbolic impact of the wall itself. “Maybe in terms of mileage it’s not a lot,” he said during the discussion. “But the visual cruelty of the wall is really striking.”

Merlin Chowkwanyun, a medical historian at Columbia University, said that reading Smith’s paper had left him “intrigued, and a little bit unnerved.”

His own chapter, about the American pandemic response, took up what he calls “the 60/40 problem”: How much of the devastating impact could be blamed on Mr. Trump, versus state and local responses and the “fractured society” that preceded his rise?

But perhaps evaluating the Trump Covid-19 response through the usual lens of “efficacy and competence,” Chowkwanyun said, is “missing the point.”

Politically speaking, he suggested, “the fact that he flouted” the dictates of public health — “that’s the point.”

Several historians noted how the Trump years had shifted the politics around various institutions, pushing people in sometimes surprising directions.

Beverly Gage, a historian at Yale whose chapter was tentatively subtitled “How Trump Tried to Undermine the F.B.I. and Deconstruct the Administrative State,” noted the unexpected transformation of people like James B. Comey into liberal heroes.

She cited a common refrain: “Wow, I spent my whole life hating the F.B.I., and here we are, hoping it can save the republic?”

The progressive left may have became more engaged with the Democratic Party, through figures like U.S. Representative Alexandria Ocasio-Cortez. But some on the left went the opposite way.

Keeanga-Yamahtta Taylor, a historian at Princeton who contributed a chapter on Black Lives matter, noted that the “first iteration” of the movement had participated in a government commission and made use of President Obama’s “open door” policy with activists.

“They did all the things conventional politics would tell them to do,” Taylor said. But in the Trump years, “many then decided they were going to do what they wanted, and operate in a bipartisan way that couldn’t be reined in.”

In the end, the two days of discussion, not surprisingly, raised more questions than it definitively answered, including an unspoken one: Would the group be meeting to consider the Biden administration in the past tense in four years, or in eight?

Mae Ngai, a professor at Columbia University who wrote a chapter on immigration, said the very real polarization of the country was also “exaggerated” by the hold the Republican Party had over the Congress, thanks to the structure of the Senate and other aspects of the electoral system.

“They don’t represent half the people,” she said. “There is going to be a lot of struggle in the years ahead for a more democratic view of America. I don’t think that chapter has been written yet.”