In January of last year, Tyler, the Creator’s “Igor” won the Grammy Award for best rap album. Speaking to the press backstage, he expressed frustration at the narrow ways in which Black artists are celebrated at the Grammys, calling his nomination in the rap category, for a deeply musically diverse album, “a backhanded compliment.”

But the attention focused on that comment overshadowed what he’d said onstage when he received the award, which was that he was grateful for his fans’ support, because, he confessed, “I never fully felt accepted in rap.”

Blockaded on both sides, Tyler nevertheless emerged victorious, an acknowledgment of the sheer force of the vision he’d built for a decade as the de facto macher of the Odd Future crew. It was also a testament to the way he harnessed the power of the internet and built a vision from whole cloth, selling it to millions without much intersecting with the systems constructed to do that.

Still, the exclusions sting a little. And the boisterous, sometimes scabrous, and persistently energetic “Call Me if You Get Lost” — currently the No. 1 album in the country — is the logical rejoinder to both of those obstacles. It’s as thoroughgoing a rap album as Tyler has released — rarely has he been this keen to flaunt his bona fides. But it also demonstrates the pop potential of Tyler’s now-signature approach to hip-hop, the way his post-Pharrell embrace of chords and melody is in fact in conversation with 1960s pop, French chanson, and acoustic soul and funk. A tauntingly good hip-hop album, or a rewiring of pop DNA: “Call Me if You Get Lost” has it both ways.

First, the bars. Part of the chasm separating Tyler from the rest of the genre (in perception, at least) is how he has in the past sometimes downplayed his lyrical skill in favor of musical experimentation. When he leans in to rapping, as he does on this album, it’s still a refreshing jolt.

Mostly, he’s preoccupied with the lifestyle that success has afforded him, but even though the subject matter can be repetitive — there’s lots of Rolls-Royce mentions, lots of discussions of passports — he delivers them with the shock of the new. “Y’all don’t understand, fish so fresh that you could taste the sand,” he boasts on the lush “Hot Wind Blows.” On the gloomy and stomping “Lumberjack,” he emphasizes the depth of his independence: “I own my companies full, told ’em to keep the loan.”

The album is structured in the manner of one of DJ Drama’s essential mid-2000s Gangsta Grillz mixtapes, with Drama himself barking over each track, weaving in between Tyler boasts. Tyler’s resuscitation of an aesthetic that was likely formative to him is both a calculated nod to the hip-hop community that couldn’t quite place him early in his career, and also a tweak to the puffed-chest energy of that era. The frictive juxtaposition of Drama shrieking “Gangsta Grizzzzillzzzz” while Tyler is speaking about keeping picnic blankets in the car — it’s both homage and disruption.

That’s how Tyler approaches his production here, too. “Lumberjack” is built on an ominous sample from the horrorcore pioneers Gravediggaz, and “Wusyaname” flirts with 1990s R&B with a sample from H-Town’s “Back Seat (Wit No Sheets).” Tyler is also eager to display how seamlessly he can integrate some of contemporary hip-hop’s signature vocalists, whether it’s the unrelentingly grimy 42 Dugg (“Lemonhead”) or the sweetly tragic YoungBoy Never Broke Again (“Wusyaname”). And he extracts startlingly good guest verses from his elders: Pharrell Williams (“Juggernaut”) and Lil Wayne (“Hot Wind Blows”). 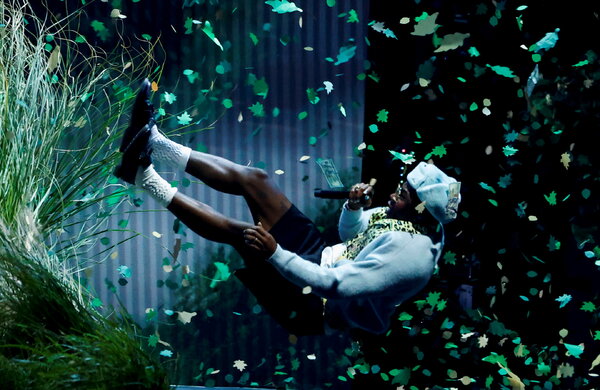 There’s a second, parallel narrative at play, too, on “Call Me if You Get Lost,” which in places reads like two separate albums born of the same circumstances tugging at each other — one about how carefree and privileged Tyler’s success has made him, and the other about how all of those spoils don’t add up to much without love.

The eight-and-a-half minute long “Wilshire” is where the two collide. It’s a startling narrative about coveting a person who you can’t have (because they’re in a relationship with one of your friends) that reads as many things: an elegantly drawn story, a gut-kick emotional excavation, a track with boom-bap urgency tempered by wandering-in-space effects. Tyler lingers over feeling here, and it’s affecting and surprising: “They say, ‘Bros over hoes,’ I’m like, ‘Mm, nah, hey’/I would rather hold your hand than have a cool handshake.”

He picks up the theme on the far tougher and more frenetic “Corso”: “My heart broken/Remembered I was rich so I bought me some new emotions/And a new boat ’cause I’d rather cry in the ocean.”

These intersections of cocksureness and anxiety are this album at its best. (Fittingly, the title “Call Me if You Get Lost” reads either as a statement of generosity or a plea, depending on your lens.) Songs like the less emotionally ambiguous “Sweet / I Thought You Wanted to Dance” are generally less impactful — Tyler thrives on discord.

A decade ago, discord was the fullness of his message. He was, by turns, a troll, an antagonist and at points outright offensive. He revisits that era on the raucous “Manifesto,” the most unexpected turn on this album: “I was canceled before canceled was with Twitter fingers/Protesting outside my shows, I gave them the middle finger.”

But Tyler is older now (30, to be precise). On the back of those controversies, he built an idiosyncratic empire that belonged to no scene (maybe because no scene would have him). “Manifesto” is the rare moment in his catalog where Tyler expresses anxiety or regret about how he once presented to the world. But he also remains obstinate. Rapping about how the expectations of speaking out politically leave him vexed, he reverts to his old perspective.

“I feel like anything I say, dog, I’m screwing [expletive] up,” he says, “So I just tell these Black babies, they should do what they want.” The lesson is that there was no lesson.

Tyler, the Creator
“Call Me if You Get Lost”
(Columbia)