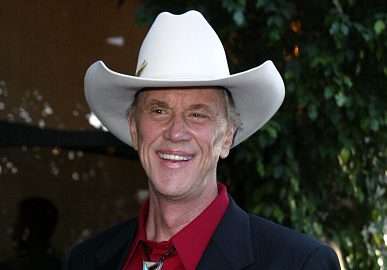 Actor Andrew Prine, who starred in Westerns such as Chisum and Wide Country, has died at the age of 86.

The TV and film stalwart died of natural causes while on holiday in Paris with his wife, Heather Lowe on Monday.

Actress-producer Lowe said of her late husband, as reported by The Hollywood Reporter: ‘He was the sweetest prince.’

The character actor was no stranger to the big screen starring in famous flicks such as Bandolero!, Chisum alongside John Wayne, and Wide Country.

Early in his career, the Western film star performed on Broadway in Look Homeward Angel.

Afterwards, he stole the show as a lawman in Bandolero! and The Town That Dreaded Sundown.

As well as his other accolades, some of his standout moments included his role as Confederate Gen. Richard B. Garnett in Gettysburg, playing the brother of Helen Keller in The Miracle Worker in 1962 and his portrayal of a lawman in Texarkana, Arkansas, on the hunt for a serial killer in the fan favourite, The Town That Dreaded Sundown.

Prine rose to fame in the 1960s after securing his role on NBC’s Wide Country.

The star played the younger brother of Earl Holliman and as the pair acted out the life of travelling rodeo performers.

Thrilling audiences with a plethora of captivating Western performances, the actor earned himself the Golden Boot Award in 2001 for his working portfolio.

A Florida native and son of a Pullman conductor, Prine was born in Jennings on February 14, 1936.

After graduating from Miami Jackson High School, he won himself a theatre scholarship to the University of Miami but dropped out to pursue acting in New York.

He got his start on Broadway in 1958 and took over from Anthony Perkins’ role in Look Homeward Angel.

Following his success on stage, scouts from Universal saw his performance and picked him up for a rodeo series.

In an interview for Word on Westerns in 2013, Prine reminisced over his early days: ‘So I said I’m just going to go out [to California] and do [that] and I’m coming right back to Broadway.

‘Then I found out how much money they would give me just to sit on a horse, and I said, “So long, Broadway.”’

The Western film icon is survived by his brother, John, and nephews Nick and Kevin, as well as his wife Heather, whom he married in 1986.