Are you busy right now? And if so, are you up for another year-end list? Are you up for another list that’s also basically another election? You see, since Thursday, WXPN, a public radio station in Philadelphia, has been unfurling what its listeners chose as the 2,020 greatest-ever songs, based on a preferential balloting system that permitted voters to choose as many as 10 songs and as few as one, of any kind from any century. Late Sunday afternoon, the countdown passed the halfway point. I like the collective act of building a list. I like the story it tells about the art form and the people who claim to love it. I love the aggregation of sensibilities and generations and blocs. I might more than love it.

The unfurling lasts 24 hours a day until a summit is reached, which means that catching the songs you voted for (or would have) might entail some sleeplessness. On the first overnight, I missed the best song ever written about anybody named Leah (Donnie Iris’s “Ah! Leah!,” No. 1,826) and one of my Top 3 favorite Donna Summer songs (“State of Independence,” No. 1,797).

Why do this to myself? Why do it for what’s essentially just another canon? Enough with those! They’re exclusionary, history-warping, gate-kept; perpetuators of the same-old same-olds — the Beatles and the Stones and Dylan. These hierarchies of worth are rarely about passion for art; they’re papacy. And didn’t I mention that this is a Philadelphia station and the list was likely determined by Philadelphia-area radio listeners? That means hours and hours of rock ’n’ roll — old rock ’n’ roll. Tons of Crosby, Stills, Nash & Young and Jackson Browne and Warren Zevon. An onslaught of Led Zeppelin. Basic rock, as a friend put it when I told him what I was up to. Bad Bunny just had the No. 1 album in the country. Anything like him on this list? As of Monday afternoon: not so far.

My best answers for “why do it?” include the aforementioned accounting for taste (I, at least, like knowing what other people like) and something more particular to our having to retreat indoors yet again. It’s been a terrible year for experiences — pleasant, frivolous, collective ones, anyway. This countdown is an oasis amid the sands of monotony and worse. I’ve done no dancing at any bar or club (or illegal house party) since mid-February. But there I was in my kitchen Friday night presented with a block of nourishment, wagging my fanny against the cabinet doors as Janelle Monáe’s “Tightrope” led to Robyn’s “Call Your Girlfriend” then the Trammps’ “Disco Inferno” (traditionally, a song that keeps me seated) and “Boogie On Reggae Woman,” the most physically addictive song Stevie Wonder has written, followed by “Highway to Hell,” essential AC/DC that my body treated as if DJ Kool had produced it. 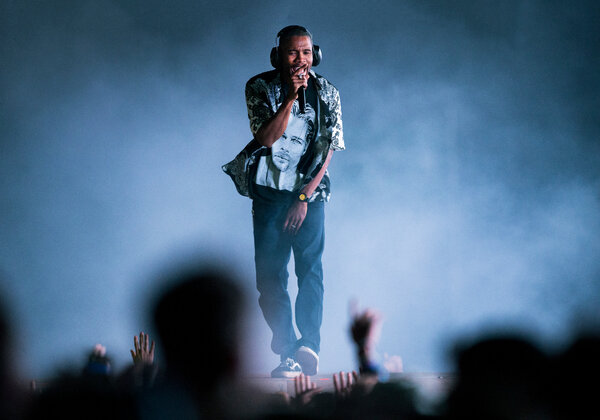 So far, the usual suspects (see “old rock,” above) find themselves overrepresented. (It’s a mark of a kind of progress that, at some point, Radiohead had as many songs as Steely Dan and the Who. The station’s site is keeping track.) There’s also been much too much Van Morrison and Moody Blues yet no or not nearly enough Nina Simone, Carly Simon, Alice Coltrane, Patti Smith, Reba McEntire, Madonna, Björk, Tracy Chapman, PJ Harvey, Tori Amos, Fiona Apple, Shakira, Beyoncé and Erykah Badu. Joni Mitchell currently leads the song count among women. And an event featuring more than 1,300 titles so far has turned up less than 20 by rappers; that number includes De La Soul’s appearance on Gorillaz’s “Feel Good Inc.” I’m looking on the bright side. There’s plenty of time.

Either way, that is not WXPN’s problem. Loosely, the station’s format is listener-supported rock, down at 88.5 on the proverbial radio dial. Rock was foundational to its programming the way flour and water are to dough. I would describe it as “modern-rock singer-songwriter,” somehow without also being too “coffee shop” or “college radio.” XPN introduced my adolescent, late-1980s, early-1990s Philadelphia self to Joan Armatrading, Iris DeMent, Lyle Lovett, Sarah McLachlan, Sheryl Crow, Ben Folds Five and Olu Dara (a.k.a. Nas’s dad). It led me to Keb’ Mo’, Jonatha Brooke, Matthew Sweet, the Jayhawks, Jeff Buckley, post-“La Bamba” Los Lobos and Don Dixon, whose “Praying Mantis” is the “Boogie On Reggae Woman” of skintight, smarty-pants pop-rock. When John Prine died over the spring, years of WXPN are the reason I knew to shed tears.

The city had other stations. WDAS for what I’d call grown-and-sexy R&B. Power 99 was rowdier and eventually more rappy. Q102 was pop. WMMR had become classic rock. WYSP seemed like rock before it was classic. One station had an alternative Friday night that played Nine Inch Nails and Meat Beat Manifesto. I was into all of it. XPN, though, was mine.

The station still airs a show devoted to the ecstasies of lesbian musicianship (“Amazon Country”) and retains a Peabody-winning hour for kids. Today, its programming seems even more broad. In a given hour you could hear Solange Knowles, Sudan Archives, Chicano Batman and the late Sharon Jones, as well as Courtney Barnett, Josh Ritter, Kathleen Edwards, Fontaines D.C., Spoon, TV on the Radio and the War on Drugs. It’s still not a place where much current hip-hop meaningfully happens.

This is a station in a city with a local music scene that it has remained part of. (The University of Pennsylvania provides its broadcast license but that’s really all.) The buoyant, affable on-air talent are audio veterans, not Penn students, and some of them sound like they couldn’t have grown up more than a mile from the West Philadelphia studio.

This is a long way of saying that my personal excitement around this station daring to mount a greatest-songs-of-all-time chart arises from a tension between its inherent format and the music toward the other end of the dial. How much will the final list reflect WXPN’s values and broad, devoted audience and how much will it also ultimately reflect a station like WMMR’s?

On Sunday, while the countdown was unveiling Beck’s “Loser” and Dion’s “The Wanderer,” I asked Bruce Warren, XPN’s program director, if he worried whether the results were going to tell him something about his station that he didn’t want to know. He laughed and reminded me that the program includes some kind of annual countdown and that, in his 30 years at XPN, eclecticism has always been the station’s raison d’être. Indeed, over the first five days, anyone listening even a little might have heard Metallica; Kurtis Blow; John Coltrane; Tash Sultana’s atmospheric dazzle; the Vienna Philharmonic playing Mozart; Lady Gaga; Frank Ocean; and a lot of Genesis.

Warren has no official way of knowing how many of the 2,400 ballots cast were from the Philly area, but his hunch is most of them. “Today, we played a song by the Meters,” he said of the New Orleans funk band’s “It Ain’t No Use,” which came in at 1,063. “We’ve played them on XPN for years. They’re probably a band that, in that genre of music, we play a lot of. That speaks to the core listeners of XPN. They know the Meters because they know we play their music.” The same is true for the surfeit of Wilco entries, the high-ish positioning of Indigo Girls, and the decent showings of Loreena McKennitt and Bruce Cockburn, two very different Canadians and former XPN staples.

But Warren is no fool. All of that Genesis testifies to some of the station’s older listeners “who grew up listening to them on WMMR.” He says that the final 200 songs will represent something of a consensus among those ballots, and that “No. 1 is No. 1 by a lot.” I wouldn’t let him spoil what kind of consensus, but I do wonder. Would it be what my friends who are also following along wearily predict? “Stairway to Heaven”? “Born to Run”? Would Aretha Franklin serve her usual canonical function of hauling both Black America and womankind to the top of the pile? Did no one write the words “Sinead” and “O’Connor” on their ballot?

One compelling aspect of this countdown business is philosophical. At 2,000-plus songs, some percentage was probably always going to hew to XPN’s taste. Local acts like the Hooters, Amos Lee and Low Cut Connie are very much here. And believe it or not, “local” extends to Bruce Springsteen and Billy Joel, who, as of midday Monday, had almost 30 entries between them. But how would a countdown of the 2,020 greatest songs proceed over at, say, WDAS, where the format is now old-school R&B and “The Steve Harvey Morning Show” anchors the a.m. block? Power 99 used to have a nightly countdown show that one song — Shirley Murdock’s “As We Lay” or Keith Sweat’s “Make It Last Forever” or Prince’s “Adore”— would dominate for what felt like weeks. What would a more epochal undertaking look like? Would WMMR find a way to make inroads there, too?

And what would the same countdown reveal at a similar station in Anchorage or Montgomery or Chicago or the Bay Area? Does it matter that a few corporate behemoths have flattened pop’s palette? Can a chart still quantify local taste? Would an accurate answer prove as vexing as precise electoral polling data, because, in part, we now live on Spotify, Apple Music and YouTube? Is this entire process just too random and subjective to be worth continuing?

I vote no; it’s not. I treasure the folly of it, the surprises, the mind-bending idea that a ranking process could place the number 1,995 next to something as celestial as Franklin’s “Amazing Grace” and go on to play another song after Ella Fitzgerald turns “Mack the Knife” into thrilling mass murder. I think “Brilliant Disguise” is a better Springsteen song than the certain finalist “Born to Run,” but no chart will ever reflect that, because it’s a blasphemous position. But I like the drama of the blasphemy and the certitude of what a chart tells you: Modernization is hard work. XPN’s is a kaleidoscope nonetheless.

It’s true that you could build your own massive, perfectly tailored playlist. But you’d miss the astonishment of Kate Bush’s “Cloudbusting” kicking off the 767-to-764 block and A Tribe Called Quest’s “Scenario” ending it in smithereens. There’d be no shock at all in hearing, say, Edith Piaf’s “Non, je ne regrette rien” (1,093) follow the Notorious B.I.G.’s “Juicy” (1,094), which had chased Paul McCartney and Wings’ “Band on the Run” (1,095). There’s no happening upon Dan Fogelberg’s 40-year-old “Same Auld Lang Syne” and swearing it's the lonely ghost lurking on Taylor Swift’s two quarantine albums. Ditto — if you’re up late enough — for hearing XPN’s newbie host Rahman Wortman go a little bonkers exclaiming that Outkast’s “B. O. B (Bombs Over Baghdad)” did indeed make the cut.

And you certainly couldn’t cringe at Olivia Newton-John’s “Xanadu” and the Richard Harris travesty known as “MacArthur Park.” I suspect that the people who voted for those two know that they’re trolls. But it doesn’t matter. Even songs as baffling (fine, as horrendous) as those have culminated in days and days of something we’ve grown increasingly estranged from: word-of-mouth radio.