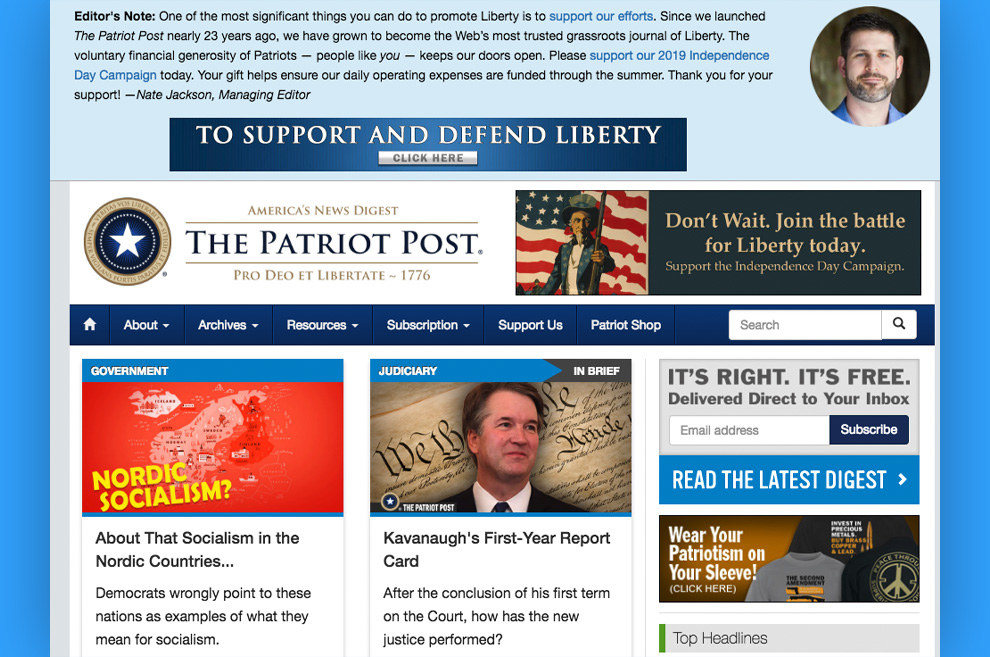 Last week, a conservative website and email newsletter that claims endorsements from Nancy Reagan, Sen. Rand Paul, and other conservative luminaries was in the midst of its annual Independence Day funding drive.

“One of the most significant things you can do to promote Liberty is to support our efforts,” read an appeal for donations displayed on the top of the Patriot Post’s site from managing editor Nate Jackson.

A man’s headshot photo appeared alongside the message — but although the man pictured works at Patriot Post as its managing editor, he isn’t actually named Nate Jackson. That’s a pseudonym, as are the names of other staffers and contributors listed on the Patriot Post’s website, including that of its publisher and executive editor, Mark M. Alexander.

While you may not have heard of the Patriot Post, it is among the oldest conservative publications online. In addition to its website, it has a newsletter whose subscribers seemingly number in the hundreds of thousands, and a large and growing presence on Facebook. Although it doesn’t run ads or charge for subscriptions, it generates enough revenue to fund a full-time staff and significant ongoing Facebook ad campaign. Yet who runs it has remained largely concealed from the public throughout its 23-year history.

When the Patriot Post launched back in 1996 as an email news digest, it was called the Federalist and did not disclose the names of those involved. Today, it’s still obscuring the identities of staff and contributors through the use of pseudonyms. During that time, the for-profit organization has funded itself solely from donations from readers, according to its owner.

That owner, Mark Caldwell, publishes the Post under the pseudonym Mark Alexander. He previously went by M. Morrison Alexander. The reason for the pseudonyms is “proprietary,” he initially told BuzzFeed News.

The combination of pseudonyms, claims of top GOP endorsements, ad-free model, and reluctance to share details about its operations make it one of the most unique, and mysterious, partisan news operations.

It’s also in the midst of what, for it, is an unprecedented investment in Facebook ads, spending more than $23,000 since May promoting Trump’s accomplishments and inviting people to subscribe to its free email newsletter, according to data in the Facebook ads archive.

The Patriot Post site generates significant organic engagement on Facebook, primarily thanks to its partisan memes and a page with close to 600,000 followers. One meme mocking vegans generated more than 2.9 million shares, reactions, and comments, and another chiding Parkland shooting survivor David Hogg attracted more than 2.1 million engagements.

It also operates an online store selling patriotic and novelty items, and has a related nonprofit, which declared over $825,000 in assets in its 2017 tax filing. 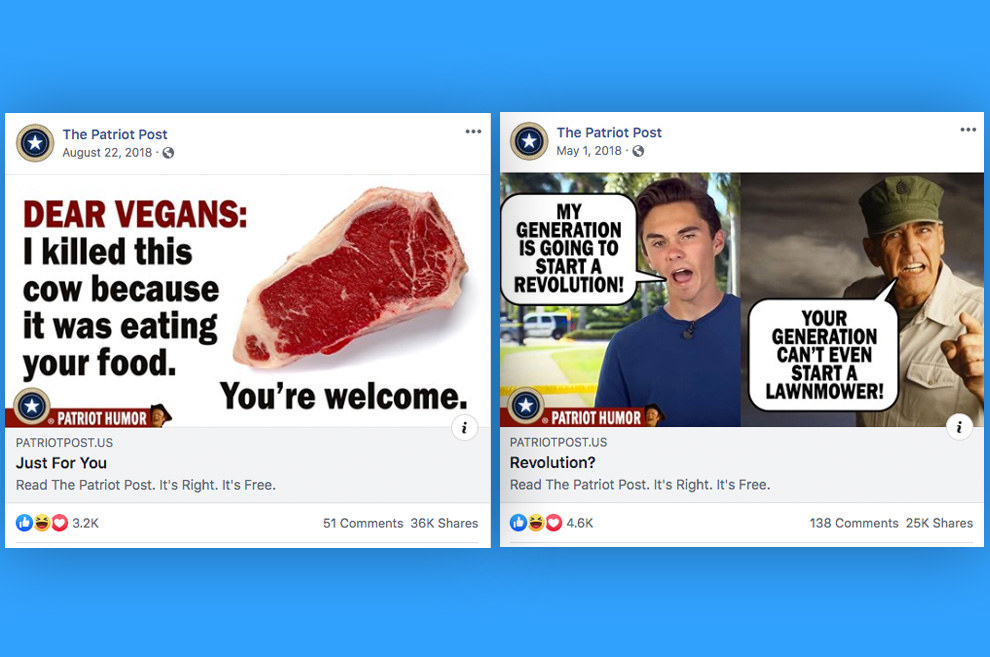 But the Patriot Post’s core offerings are email newsletters promising “timeless and highly acclaimed analysis, advancing our mission to extend the endowment of Liberty.”

So just how many people have subscribed since it started collecting email addresses way back in 1996?

“It’s proprietary, it’s a big number,” said Caldwell, after picking up the phone in Lookout Mountain, Tennessee, a wealthy, bucolic suburb of Chattanooga. He runs the company out of a quaint storefront office along a winding highway popular with tourists that connects Tennessee, Georgia, and Alabama.

Caldwell said he’s the sole owner of the Patriot Post, though he clarified that there are actually two people using the Alexander pseudonym. Why? “That’s all proprietary,” he said. (Caldwell later said a staffer uses the Alexander name to help him answer email.)

A lot of the Patriot Post’s details are not for public knowledge. Asked if he can say how much money the company takes in per year from donations, Caldwell said, “No, that’s totally proprietary.” It was the same when asked where the money came from to start the business, and his current number of full-time employees: proprietary. The site lists 11 people under its “staff” heading. Most, if not all, appear to use pseudonyms.

Caldwell told BuzzFeed News the Patriot Post only accepts money from individual donors, and the average donation is less than $50. He also said he is the organization’s lowest-paid employee. (Caldwell owns the building that houses its office, as well as a parking lot behind it, according to public records and media reports.)

“We have a large and loyal readership, and loyal supporters … no big sugar daddies, no big backers,” he said.

While he declined to share many details during an interview, Caldwell is more forthcoming on the site when using the Alexander moniker. There’s a lengthy bio recounting his (i.e., Caldwell’s) life, the details of which appear to be largely true. He writes a weekly column, and his headshot is often used in memes that feature quotes attributed to his pseudonym.

When pressed to explain the Post’s unusual use of pseudonyms, Caldwell said it’s in the tradition of the authors of the Federalist Papers, and also part of an organizational philosophy that “We are about ideas, not who drafts them.”

That ethos appears to be at odds with the fundraising pitch that prominently featured the name and photo of Patriot Post staffer “Nate Jackson,” the promotion of Caldwell/Alexander’s weekly column, and the fact that his headshot and pseudonym are featured in memes. Each edition of the site’s daily email digest is also signed by the Alexander and Jackson pseudonyms. (One of the few times Caldwell overtly linked his real name with the operation was for a glowing 1999 article by thechattanoogan.com.) 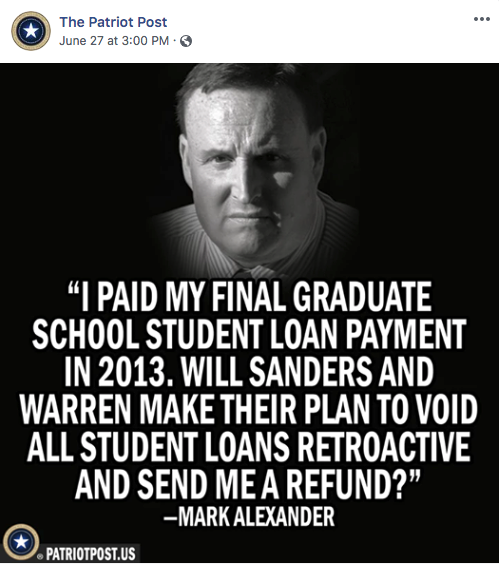 The daily Patriot Post digest is a comprehensive summary of news and issues from a conservative perspective, mixed with memes, commentary, and cartoons. A recent edition included headlines “Left Laments Trump’s Environmental Success” and “U.S. Women Win Whiner’s World Cup.” Though Caldwell wouldn’t share subscriber numbers, a 2009 post from him referred to “our hundreds of thousands of Patriot readers.”

Caldwell said the daily digest was previously attributed to “Publius,” the same pseudonym used by the authors of the Federalist Papers, and the name of the corporate entity that owns the Post. At some point that changed, and pseudonyms for individuals began to appear.

“I realize what we do is enigmatic, but we elected not to promote our writers unless they chose that — and writing under a traditional pseudonym is a natural obstacle to elevating the writer over the message,” he said.

The only way the average reader — and donor — would know Alexander and other staffers aren’t using their real names is to read to the 13th paragraph of the site’s About page. And that disclosure is relatively new. Before August 2017, according to the Internet Archive, the page did not mention the use of pseudonyms. It’s unclear whether those who have given money over the years are aware that the names they read in the emails and on the site aren’t real.

BuzzFeed News reached out to several people cited on the page to confirm their quotes. A spokesperson for Frist said in an email that “he did not provide” the quote attributed to him. Others did not reply.

The Post also lists an endorsement from the Harvard Political Review: “The Patriot Post is leading a surprisingly well-organized charge into the world of Internet politics.”

Except that’s not the actual quote, which appeared in the Fall 2003 issue. In reality, it read, “The Federalist and dozens of conservative publications and other online groups are leading a surprisingly well-organized charge into the world of Internet politics.” Notably, the article says that Caldwell’s newsletter (then called the Federalist) had 500,000 subscribers at the time. It also quoted him as Mark Alexander and did not note that name is a pseudonym.

Caldwell declined to put BuzzFeed News in touch with one of his endorsers before publication, and didn’t provide citations for other quotes. He did say that, like the Harvard reference, many of them were offered back when the publication operated under a different name. (It changed from the Federalist after the Federalist Society, a prominent group of conservative lawyers, objected and initiated legal action.)

“The other comments were by email or snail mail years ago, though Howard Baker was in person,” Caldwell said in an email. “I have never had a question about the comments, and at the time, all were familiar with us, and some were and remain donors.”

Given how long his organization has been offering its email newsletters, it’s entirely possible the Patriot Post is popular in conservative circles and counts prominent politicians among its subscribers and fans. Caldwell himself was once quoted in the American Spectator, albeit under his pseudonym and without any disclosure. The same was true when he received an award from a conservative media watchdog organization in 2007. The press release cited Mark Alexander, and that’s how he was introduced to give his acceptance speech.

Caldwell and his family also have ties to Tennessee politicians. State Rep. Robin Smith, a former chair of the Tennessee Republican Party, is a regular contributor to the Patriot Post. Caldwell’s brother L. Hardwick “Hacker” Caldwell III, who runs a hedge fund called TSWII, served as a cochair of former Tennessee senator Bob Corker’s election committee. He also drew scrutiny over the fact that he and the members of his family (including children) collectively gave $73,280 to Corker’s campaigns and $20,000 to a Corker leadership PAC, according to the Campaign for Accountability, a nonpartisan watchdog group.

Caldwell said his brother “has no involvement whatsoever” with the Patriot Post. He said he’s turned down every offer of advertising since day one, though an early version of his site solicited sponsors. Refusing ads is a notable policy given that email lists are huge moneymakers for conservative publishers, and the Patriot Post’s has been built up over more than 20 years.

“We never will have ads, and so don’t have ads, because organizations that do [accept] advertising are subject to some editorial influence based on those revenues. I don’t care whether it’s complete left or complete off to the right, that’s true regardless of who you are,” Caldwell said.

After more than 20 years in publishing, Caldwell said the biggest change he’s seen is the pace of the news cycle — the rush of publishers to chase every story, regardless of its value.

“I think the Internet is the greatest First Amendment platform in history,” he said in an email. “But what I dislike most about media outlets today, is that, because news sites across the political spectrum are driven by market share and ad revenue, that they now publish ‘non-news’ news through a fire hose, saturating consumers with what their relentless churn of ‘news,’ most of which is not, by any reasonable standard, newsworthy.”

After speaking with BuzzFeed News, Caldwell published a column on his site under his pseudonym that included BuzzFeed’s logo among news organizations that “Promote Fake News.” The graphic also included the logo of the Washington Post. During a phone interview before the column was published, Caldwell had cited the Post and National Review as two publications “that I highly respect.”