PARIS — For almost 60 years, the artist known as Christo dreamed of wrapping the Arc de Triomphe. As a young man, having fled communist Bulgaria, he would gaze at the monument from his tiny garret apartment. A photomontage dated 1962 shows the 164-foot-high arch crudely bundled up. Freedom trumped the sacred. He always wanted people to look again at what perhaps they did not see.

Now, a little over a year after Christo’s death at the age of 84, “L’Arc de Triomphe, Wrapped” is a reality. Some 270,000 square feet of silvery blue fabric, shimmering in the changing light of Paris, hugs the monument commissioned by Napoleon in 1806 at the giddy height of his power. The polypropylene material, its tone reminiscent of the city’s distinctive zinc roofs, is secured but not held rigidly fast by almost 1.9 miles of red rope, in line with the artist’s meticulous instructions.

“He wanted a living object that, with its moving folds, would turn the monument’s surface into something sensual,” Vladimir Yavachev, Christo’s nephew and the project director, told me. Suddenly, at the top of the Champs Élysées, a magical pale object beckons, its glistening lightness anchored by steel slabs weighing 150 tons. The effect is at once disorienting and riveting.

Yavachev moved from New York to Paris two years ago to lead the project. The work has been arduous. France’s League for the Protection of Birds expressed concern about two falcons nesting high in the facade. That led to a first delay, before the pandemic caused a second.

Bastille Day on July 14 and Armistice Day on Nov. 11, when ceremonies take place at the monument, left a limited window. Building the cages whose steel bars pass an inch or two from the outstretched hand or foot of a frieze or a funereal relief was painstaking. So was rappelling down to work under the overhangs of the cornice. In all, 1,200 people labored on the wrapping.

“It was difficult, stressful,” Sebastien Roger, the lead engineer, said, as we stood under the arch. “You have to be careful, it’s the Arc de Triomphe after all!”

From its official opening Saturday until Oct. 3, the arch has in fact become something else — transformed into an oversize imagined object through the liberating obsession of an artist who refused to accept limits. Born into the stifling oppression of the Soviet imperium, Christo — whose full name was Christo Vladimirov Javacheff — always had one core guiding idea: the inalienability of freedom. When the Berlin Wall went up in 1961, he made a wall of oil barrels on the Rue Visconti in Paris, a first defiant public statement.

Standing at the Arc de Triomphe this week, President Macron said, “I think that what we believe is this: crazy dreams must be possible.” The wrapping of a monument at once military, historical, artistic and a repository of national memory made French people “extraordinarily proud,” he suggested, “because this is what artistic adventure is all about.”

There was some grumbling. Florian Philippot, a rightist politician, denounced “a garbage bag draped over one of our most glorious monuments.” In the daily Le Monde, Carlo Ratti, an Italian architect, asked if it was environmentally acceptable to use vast amounts of fabric to wrap a monument. In fact, almost all the material used is being recycled, Yavachev said.

Like Christo’s “The Gates” — all 7,503 of them — that threaded a tapestry of deep saffron across Central Park in 2005, or the Reichstag wrapped in Berlin in 1995, or the 3,100 umbrellas deployed along inland valleys in Japan and California, the wrapped Arc de Triomphe seems certain to induce in people a sense of collective wonder. The crowds expected are so large that the Place Charles de Gaulle is being closed to traffic on weekends until the arch is unwrapped, allowing viewers to get close without dodging the cars normally slaloming at high speed across the large circular expanse.

As with all Christo’s major projects, no sponsors or donors were accepted. The wrap has been entirely funded by the artist’s estate. “My uncle always told me that if you are accountable to anyone, you don’t have freedom,” Yavachev said. “Remember, in art school in communist Bulgaria, he was criticized by the authorities because the peasants in his painting did not look happy enough! That was too much for him.”

Roselyne Bachelot, the culture minister, said: “The Arc de Triomphe is taken away from our gaze and at the same time overexposed to our gaze. This subtraction and this overexposure lie at the core of the work. Thank you, Christo, for offering us the gift of looking in another way, in a new way, at masterpieces built by other artists.”

The Arc de Triomphe, like any great monument, was built to last. Christo’s conceptual art is ephemeral. Within weeks it will be dismantled. There is something liberating in this, perhaps because the fleeting nature of the work makes possession impossible. The work is immense, yet insubstantial. The fabric seems to express something nomadic, in keeping with Christo’s own peripatetic life.

After living in Paris for many years, he moved to New York, living as an illegal immigrant with his wife, Jeanne-Claude, between 1964 and 1967, before getting a green card and becoming a citizen in 1973. By the time the United States opened its arms to him, he had been stateless for 17 years. Freedom meant something. America was also an idea.

This is not the first time that Christo has wrapped a Paris icon. In 1985, after many years of battling the authorities for permission (he was a specialist in the attritional bureaucratic warfare often required to achieve his aims), the artist wrapped the Pont Neuf and the 44 streetlamps on the bridge in a sandstone-colored fabric. Three million visitors came to see the installation during its two-week life.

For the wrapping of the Arc de Triomphe, a project supported by Macron and the Paris mayor, Anne Hidalgo, permission came more quickly — even if those falcons and Covid made life difficult. From July 15, Roger, the engineer, said, teams worked 24 hours a day in shifts to do the preparatory work.

Only once before has the arch been partially covered by fabric. In 1885, on the occasion of the funeral of the beloved poet and author Victor Hugo, a large black shroud was hung from the monument. More than two million people joined the funeral procession from the Arc de Triomphe to the Pantheon, where Hugo was interred.

Christo loved Paris. It was his second city, alongside New York. “I miss my uncle’s excitement, he would have been hopping around!” Yavachev said. It has been a tough year for the French capital, often under curfew as a result of the pandemic, the restaurants and cafes that are the connective tissue of the city closed for long periods. So, “L’Arc de Triomphe, Wrapped” feels like a liberating moment, a major public artwork to which large crowds will throng.

“Christo overwhelms us, prods us, makes us talk,” Hidalgo said. “He plays with light, with the Paris sky that reverberates through his ephemeral work.”

A few years before he died, I met Christo in Doha, Qatar. During a 45-minute interview he refused to sit down, speaking with irrepressible vitality. Eat little, he counseled, in order to channel energy (in his case yogurt with garlic for breakfast, then nothing until dinner). Decide what you want — the difficult part — and apply yourself without compromise to that end. So determined was he that a posthumous work has come to fruition in Paris with what Yavachev described as his uncle’s spirit “everywhere around me.” 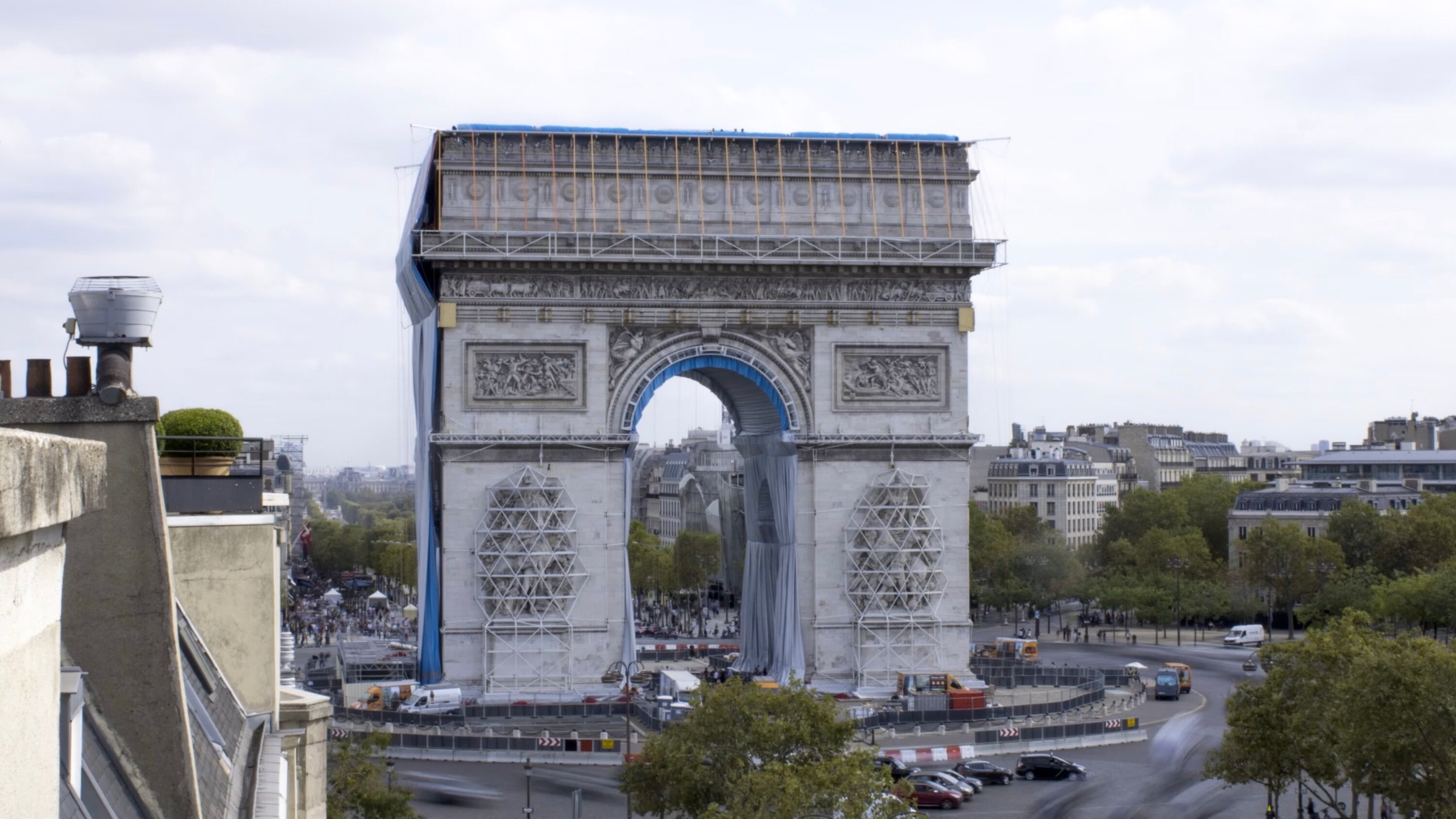 The Arc de Triomphe is many faceted. It began life as a monument to military glory. Names of Napoleon’s great battles are engraved across it. It was a tribute to a victorious emperor. But war is also terrible loss, as the 20th century demonstrated. In 1920, two years after World War I, the tomb of the unknown soldier was placed under the arch. The inscription on it reads: “A French soldier dead for the homeland 1914-1918.” An eternal flame burns.

The presence of the tomb made it impossible for military parades to pass under the arch, as if to declare the futility of war.

During the project the tomb was carefully respected. The people who tend to the flame every evening at 6:30 p.m. were able to complete their task. One of them told journalists Thursday that “the unknown soldier has been in his shroud for 100 years. Christo left us prematurely and is now in his shroud. And I believe this temporary shroud tells us the arch is wrapped but you will see it again soon — so there is a kind of unity around us.”

Certainly the wrapped Arc de Triomphe — light, breathing, glimmering — speaks of anything but war. After completing a project, Christo liked to say, “We didded it!” Yes he did, even from beyond the grave. Freedom is also a fierce act of the imagination.