What could have been! 98 Degrees — comprised of members Drew Lachey, Nick Lachey, Jeff Timmons and Justin Jeffre — was one of the biggest boy bands of the 1990s who’ve had an enviable career of chart-topping hits and impressive collaborations, though there are a few “what ifs” that the band members can’t stop thinking about.

Look Back at the 22 Biggest Boy Bands of All Time

“I think there’s also these little scenarios where, ‘Oh, you should play [this], you should put this collaboration in there. You should have this person on this song.’ And you’re, like, ‘Oh no, that’s OK.’” Drew, 45, exclusively told Us Weekly during a group interview ahead of the band’s fall tour after the release of their “Hardest Thing I’ll Ever Have to Do Remix.”

He continued, “You know, I’ve never even heard of that person, you know? And then the next thing, you turned around and they blow up and they become Nelly or Britney Spears. So, a few small things … that maybe if you would have had a crystal ball, maybe would have done a little differently. There are probably a couple of those.”

The band noted that during their heyday, they had discussed potential collaborations with both Spears, 39, and Nelly, 46.

“There might’ve been conversations at one point or another,” Drew added, before his brother Nick, 47, quipped, “Well we collaborated with Stevie Wonder, so I’m so sure we had had some good ones.”

The group, who’ve been vocal supporters of the #FreeBritney moment amid her ongoing conservatorship legal battle, shared their excitement over the “Lucky” crooner’s recent engagement to Sam Asghari.

“She’s a sweetheart and we’re really happy for her and wish the best for her,” Jeffre, 48, said. “And, especially all she’s been through. So, you know, best of luck to her and hopefully we’ll see her sometime in the future.” 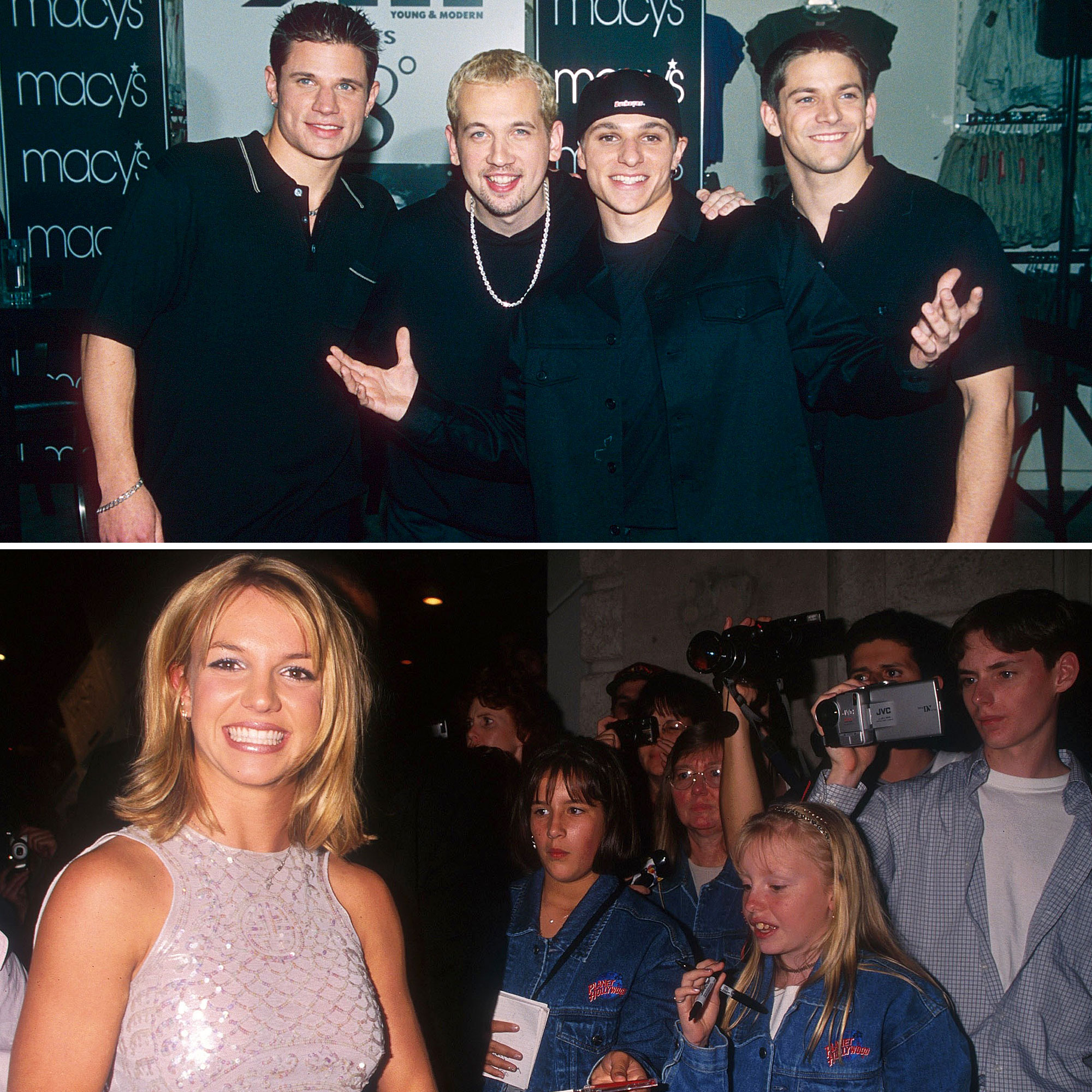 The Love Is Blind cohost also joked about the timing of the proposal news ahead of his appearance at the MTV Video Music Awards on September 12.

“I joke that only Britney could dominate the VMAs without actually being there,” Nick added. “It’s all anyone could talk about is the fact that she was engaged, but I think all of us who know her and have seen her grow up in and know her story and her path couldn’t be happier for her, and she deserves nothing but happiness and contentment and peace in her life. So good for her.”

Britney Spears’ Ups and Downs Over the Years

While the group did acknowledge their past regrets over not making certain duets a reality, they’ve been focused on living in the moment since the band’s comeback.

“I think we talk about this all the time,” Timmons, 48, noted. “I think we’re enjoying the ride more than ever now. You know, I think when we were younger, it’s all we had and  we’re working very, very hard and we’re all perfectionists and Type A, so we probably didn’t enjoy the moment as much as we should have.”

He continued, “But now that we’re older, I mean, we’re having the time of our lives really. So I think if we were to talk to our younger versions of ourselves, we’d just say, ‘Hey, take a deep breath, enjoy it because this ride is a unique one that not a lot of people get to get to enjoy.’ So, I think, as we were getting older and we started to relish almost every moment that we’re able to do it.”