In late 2018, as the clouds of the looming federal election gathered, Scott Morrison used an address to honour the memory of the man most associated with the Sydney Harbour Bridge to lay out the reason for a cut in Australia’s immigration intake.

Morrison’s Bradfield oration committed the government to slicing the permanent migrant intake to 160,000 from 190,000, arguing the residents of the nation’s major cities were worried about their ever-increasing populations. 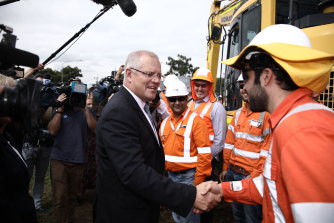 Scott Morrison meeting engineers working on a roads project in the 2019 federal election. He had recently announced a cut in migration numbers, citing pressure on the nation’s infrastructure.Credit:Dominic Lorrimer

“They are saying: enough, enough, enough. The roads are clogged, the buses and trains are full. The schools are taking no more enrolments. I hear what you are saying. I hear you loud and clear,” he said.

Little did he know that within two years, buses and trains would be empty, schooling would be done via Zoom and the roads were absent of vehicles as millions of people worked from home.

The immigrants the Prime Minister feared had clogged up the country disappeared due to the coronavirus pandemic. In 2020-21 alone, the country lost 95,000 permanent residents and hundreds of thousands of international students.

It was the largest loss of population since World War I. And this current year is not looking any better – in August, a net 10,800 people left the nation’s shores.

Once the pandemic has pulsed through the economy, EY chief economist Jo Masters reckons Australia will have a shortfall of 834,000 migrants from what had been expected.

The drumbeat for a return of migrants has increased sharply over recent months as businesses realise they don’t have enough staff. The dependence of the country on migrants, particularly temporary ones, has been fully exposed by the pandemic.

Adding to the issue has been, unexpectedly, Reserve Bank governor Philip Lowe who upset much of the economic orthodoxy when in July he linked the surge in unskilled migrants to low wages growth.

“In my view, this is one of the factors that has contributed to wages being less sensitive to shifts in demand than was once the case,” he said.

He also delivered a central bank backhander, shrouded in a velvet glove, noting the importation of skilled migrants also diluted the “incentive for businesses to train workers to do the required job”.

This is the same RBA governor who has urged governments at all levels to sink money into infrastructure to improve our cities and lift overall productivity.

Of the 10 largest infrastructure projects under way across the country right now, eight are in our three largest cities. WestConnex in Sydney (cost somewhere north of $21 billion), the Melbourne Metro Tunnel (at least $14 billion) and Brisbane’s cross river rail (no change from $6 billion) are all being built to deal with current and future congestion caused by growing populations.

With populations not growing as fast as expected (or, in Melbourne’s case, actually falling), what does that mean for all that mega-infrastructure spending?

Both sides of politics understand the issues at play around immigration.

The nuances around new Australians’ economic contribution, the tension between permanent and temporary and the dependence on some sectors for certain types of migrants (how our university sector requires fee-paying students who end up supplying cheap labour to retail and hospitality) are in real danger of being lost in a proper discussion about immigration.

When Morrison announced the cut in permanent migrants, there was no debate about the figure of 160,000. There had been no discussion about how it had got to 190,000.

And there certainly had been no proper debate about the sheer number of temporary migrants.

The pandemic has forced nations to re-think many economic shibboleths. Immigration may be another.