A new report has found unwanted admissions and long wait times for in-home support are among the worst problems affecting the aged care sector, with the COVID-19 pandemic increasing the chances of residents being treated poorly.

The report came as the nation’s top nurse on Tuesday told a coronial inquest into 45 deaths at St Basil’s that she assessed the Fawkner aged care home as “fit for purpose”. 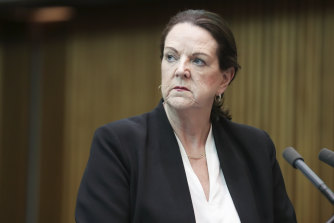 Chief Nursing Officer Alison McMillan told the coronial inquest into St Basil’s that she had assessed the Fawkner aged care home as fit for purpose, but had not seen any resident’s rooms.Credit:Alex Ellinghausen

Chief Nursing Officer Alison McMillan’s assessment of St Basil’s as suitable for care was made to Brendan Murphy, then Australia’s chief medical officer, and came despite not having met any residents, visited any resident rooms or inspected the facility’s dementia ward.

“You were going out to St Basil’s to review this on behalf of the [aged care] minister. Would you think it appropriate, now knowing what you do, to at least walk around the facility and have a look and see some of the residents?” State Coroner John Cain asked Professor McMillan on Tuesday.

“With the benefit of hindsight, absolutely,” she replied.

Despite this, Professor McMillan agreed on Tuesday under examination by Peter Rozen, QC, counsel assisting Judge Cain, that she had told Professor Murphy that St Basil’s didn’t need evacuation because of its COVID-19 outbreak.

Professor McMillan was also told by Mr Rozen that from her first visit on July 22 last year until the home was evacuated nine days later, “you were the senior-most Commonwealth officer present in Melbourne that was involved in that practical running off St Basil’s”.

Professor McMillan rejected this description, saying she was not responsible and only went to St Basil’s “at the request of the minister and senior executives in the Commonwealth Department of Health. There was nothing within my role that makes me responsible for the operation of a residential aged care facility”.

The report released on Tuesday by the Older Persons Advocacy Network found that, along with failures of care of the type being uncovered in the six-week-long St Basil’s inquest, unwanted admission into a home and long wait times for support at home are the worst problems in a sector at the centre of controversy for years.

“Older people are still enduring confronting experiences,” said Craig Gear, chief executive of the Older Persons Advocacy Network, which assists people in aged care and their families, or those who get publicly funded care in the home.

The network’s report released on Tuesday identified other issues including:

Mr Gear said the report reflected many of the issues raised in the Aged Care Royal Commission, which led the Morrison government in May to increase funding for aged care by $17.7 billion.

Part of that increased funding included $99.6 million towards advocacy programs like that run by the Older Persons Advocacy Network.

Aged Care Services Minister Richard Colbeck said these sorts of programs would “ensure those seeking support are empowered to make informed decisions about their care, understand their rights, and have support to resolve complaints when they arise, in a time of great change”.

The report tells the story of an unnamed 95-year-old male resident who lost his dentures at an aged care home. The home was adamant the dentures were not lost, and repeatedly attempted to put a pair of dentures into his mouth. The man’s daughter discovered, though, that these dentures belonged to a female resident. New dentures were ordered but didn’t arrive during repeated lockdowns and, without teeth, the resident could eat only puréed food. He went from 90 kilograms to 48 kilograms. “The resident is now palliative, bed bound with difficult-to-manage pressure sores,” the report said.

Mr Gear said the extra funding from the federal government was extremely important, but also only “a big first step … Further investment in, and transformation of, the aged care system is required”.

Among those keen to stay out of aged care is 89-year-old Laurie Mein, who lives at home in Lower Plenty and receives a federal care package that makes this possible.

Ms Mein has always been socially active and found the pandemic extremely difficult because it kept her away from her five grandchildren and five great-grandchildren, and from various activities including her church and what she calls “granny’s playgroup” – a weekly catch-up organised by Banyule Council she has been a part of for four years.

“It’s been wonderful, there are 14 or 16 of us, and we do things together rather than being at home alone. Once or twice we’ve been to the op shop. Last week we went out to Sugarloaf Park.” 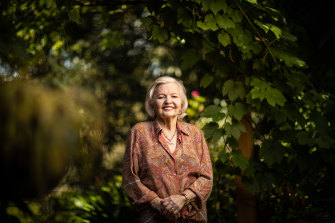 Laurie Mein, 89, gets a home care package from the federal government and wants to stay out of aged care and in her Lower Plenty home.Credit:Scott McNaughton

Ms Mein said understanding the various care packages on offer was “just a nightmare” and something few people could follow. Her daughter, Julianne East, said navigating what was available was problematic for older people and their families. “The systems need to be streamlined so it works for the older person rather than working for the government organisations responsible for it.”

Ms East said carers also tended to assume a lack of ability among older people. “They will tend to contact me rather than contact Mum. It’s as if, because you’re old, you’re not competent.“

Ms Mein said on Tuesday that she wanted to avoid aged care if she could. “My mother was in a home, and she had a lovely one, but I still want my own home and to look out and see my own garden.”