Hadija Haruna-Oelker, a Black journalist, has just produced the German translation of Amanda Gorman’s The Hill We Climb, the poem about a “skinny black girl” that for many people was the highlight of President Joe Biden’s inauguration.

So has Kübra Gümüsay, a German writer of Turkish descent.

As has Uda Strätling, a translator, who is white. 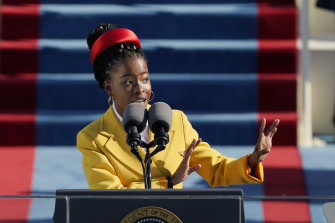 American poet Amanda Gorman recites The Hill We Climb during the Inauguration of US President Joe Biden.Credit:AP

The trio was also asked to make its political and social significance clear and to avoid anything that might exclude people of colour, people with disabilities, women, or other marginalised groups.

“It was a gamble,” Strätling said of the collaborative approach. 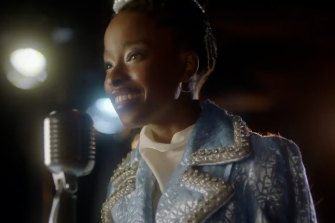 Amanda Gorman also recited a poem at the Super Bowl in February.

“It is the victory of identity politics over creative freedom,” she wrote, adding: “To remove imagination from translation is to subject the craft to a lobotomy.”

Some black academics and translators have also expressed concern. “There is a tacit idea that we are supposed to be especially concerned about the ‘appropriateness’ of a translator’s identity in the particular case of blackness,” John McWhorter, a professor of English and comparative literature at Columbia University, said in an email.

Other differences between writers and their translators — such as wealth levels, or political views — were not sparking concern, McWhorter added. “Instead, our sense of ‘diversity’ is narrower than that word implies: It’s only about skin colour,” he said.

“This is not about who can translate, it’s about who gets opportunities to translate,” Deul said. She listed 10 black Dutch spoken-word artists who could have done the job in her article but said all of them had been overlooked.

The one opinion missing in all of this is, of course, Gorman’s. Viking is releasing The Hill We Climb in the United States on Tuesday. Apple TV Plus on Friday began streaming her interview with Oprah Winfrey, but she has not commented on the debate her work has spurred. Her spokeswoman didn’t respond to requests for comment. 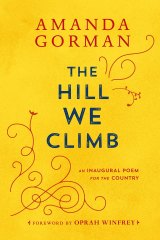 An English publication of The Hill We Climb, by Amanda Gorman.

Gorman, or her agent, Writers House, which represents the translation rights, appeared to have influence on who was selected. Aylin LaMorey-Salzmann, the editor of the German edition of The Hill We Climb, said that the rights owner had to agree to the choice, which had to be someone of similar profile to Gorman.

Irene Christopoulou, an editor at Psichogios, the poem’s Greek publisher, was still waiting for approval for its choice of translator. The translator was a white “emerging female poet,” Christopoulou said in an email. “Due to the racial profile of the Greek population, there are no translators/poets of colour to choose from,” she added.

A spokeswoman for Tammi, the poem’s Finnish publisher, said in an email that “The negotiations are still going on with the agent and Amanda Gorman herself.”

Several European publishers named black musicians as their translators. Timbuktu, a rapper, has completed a Swedish version, and Marie-Pierra Kakoma, a singer better known as Lous and the Yakuza, has translated the French edition, which will be published by Editions Fayard in May.

“I thought Lous’ writing skills, her sense of rhythm, her connection with spoken poetry would be tremendous assets,” Sophie de Closets, a publisher at Fayard, said in an email explaining why she chose a pop star.

Issues of identity “should definitely be considered” when hiring translators, de Closets added, but that went beyond race. “It is the publisher’s responsibility to look for the ideal combination between one given work and the person who will translate it,” she said.

Haruna-Oelker, one of the German translators, said one disappointing outcome of the debate in Europe was it had diverted attention from the message of Gorman’s poem. The Hill We Climb spoke about bringing people together, Haruna-Oelker said, just as the German publisher had done by assembling a team.

“We’ve tried a beautiful experiment here, and this is where the future lies,” Gümüsay said. “The future lies in trying to find new forms of collaboration, trying to bring together more voices, more sets of eyes, more perspectives to create something new.”

A weekly read for book lovers from Jason Steger. Sign up now.