Australia’s new daily record of 37,100 confirmed coronavirus cases will soon be eclipsed, with actual case numbers believed to be magnitudes higher as demand for both PCR and rapid antigen testing stretches the country’s resources.

Public health and economic experts say rapid antigen tests should be subsidised more broadly than the federal government currently plans to help slow the spread of the coronavirus and keep pressure off hospitals. 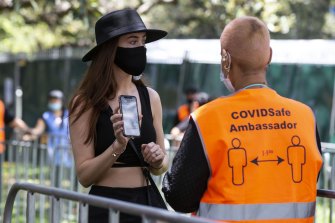 Epidemiologist and public health medicine specialist Professor Tony Blakely, who estimates COVID-19 cases are between five and 10 times the daily confirmed cases, said if confirmed infections reached 50,000 a day, the real figure is likely to be between 250,000 and 500,000 actual infections each day.

“It’s only going to take about three weeks at those sorts of numbers before 40, 50, 60 per cent of the population has been infected, and the virus will run out of steam,” the University of Melbourne academic said.

UNSW Business School Professor Richard Holden, who estimates the true number of daily infections to be over 50,000, said the usefulness of case numbers had changed since the beginning of the pandemic but they remain a leading indicator for the demands on the hospital system.

“If you’re … thinking that what 1000 cases meant in March 2020 still means the same thing today that’s obviously not right. I’m sympathetic to the point that says we need to make the public understand that those numbers mean different things,” he said.

“But they still provide useful information. For instance, we know hospitalisations lag case numbers by a week or two weeks.”

Last week national cabinet committed to providing rapid antigen tests for free to those determined to need them, including people with symptoms, as well as subsidising tests for people who can’t afford it.

Professor Blakely said free rapid antigen tests allow people to protect vulnerable family and friends by testing before spending time with them, and to also help slow the spread of the virus particularly in vulnerable pockets of the community.

“As soon as we start getting some supply back the high socio-economic groups will find that all first and snaffle it all up,” he said.

Former Australian Competition and Consumer Commission chairman Graeme Samuel recommends scrapping the reporting of daily case numbers altogether. He said the shift to rapid antigen testing has affected the validity of the numbers and they are now an unnecessary data point propagating fear among the public.

Professor Samuel, a professorial fellow at Monash University’s Business School who has worked as a lobbyist for the airline industry during the pandemic, said people were waiting on the daily figures with “bated breath”.

“I just wring my hands in despair at the announcement of the record numbers of infections and think for heaven’s sake can we stop it please.

“The messaging needs to completely change. The only thing that is relevant is the capacity of our health system to cope with this disease,” he said.

Professor Samuel supported subsidies for rapid antigen tests being provided to those who were on low-incomes through existing systems such as pharmacies, but does not think they should be free for everyone.

Professor Holden said rapid antigen tests should be provided for free, saying the government already subsidises services and goods such as education and medicine when there are positive effects on society.

Former Reserve Bank governor Bernie Fraser supported providing free tests to those who could not afford them.

“I very much agree the government should be prepared to identify the needy and vulnerable groups and prepare very heavily subsidised or, in this case, free services to those kinds of people,” he said.

He said the case numbers should be made more accurate rather than done away with altogether.

“They’re the starting point for the other things, hospitalisation and intensive care unit [figures],” he said.

“It’s in everybody’s interest to know what’s happening … To understand future hospitalisations we need to know the number of infections a fortnight earlier and that’s the problem at the moment.”

He said the government had been too slow to approve rapid antigen tests, hadn’t ordered enough and was now making a mistake by asking the public to pay.

“Normally in the market I benefit from something I purchase. In this circumstance, other people benefit and price signals don’t work. So we ought to make them freely available,” he said.