Dozens of wind turbines almost twice the height of the Sydney Harbour bridge could soon be seen off the coast of Australia after the federal government last week named six areas it hopes to declare “suitable” for the industry after years of delay.

As Australian governments dithered over drafting regulations for Australia’s offshore wind industry a technological revolution swept the globe. Turbines that just a few years ago towered over the landscape became gigantic, sophisticated machines that could be built on barges and floated far offshore pumping vast amounts of energy back to land via undersea cables.

“We are way behind the game, way behind the rest of the world in producing wind off our coastline. Again, we have a lot of catching up to do. Offshore wind is jobs-rich and energy-rich,” federal Energy Minister Chris Bowen said last week, announcing which sites around the country the government viewed as suitable for offshore wind. 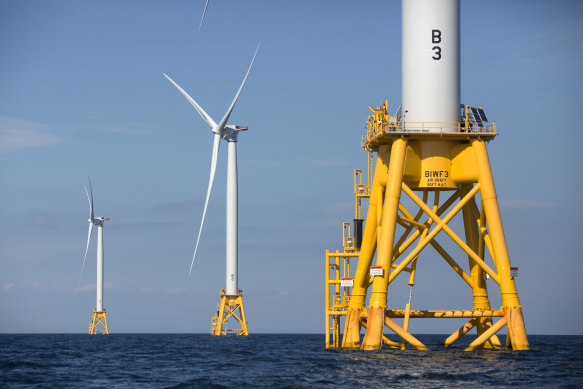 Offshore wind farms could be key to providing energy security.Credit:AP

In the years it has taken to draft and finally approve regulations for offshore wind, the industry has exploded across Europe, Asia and now parts of North America. As the industry spread across the globe, the machines it uses to generate electricity have grown in size.

The turbines expected to be installed off Gippsland, Wollongong and Newcastle will have blades longer than 100 metres long scraping the sky 260 metres above the waves. The top of Sydney’s Harbour Bridge is 135 metres above sea level.

Bowen confirmed that the first project seeking approval would be the Star of South, which proponents hope to build off Gippsland. Should it go ahead as planned it would be one of the world’s largest, providing up to 20 per cent of Victoria’s energy.

Wind turbines have grown on average by 60 per cent over the past 20 years as their builders strive to make the most of the typically stronger and more consistent winds that can be found further from the ground.

Larger turbines generate energy more cheaply too, says Andy Evans, who was the co-founder and chief executive of Star of the South and who is now leading another offshore wind farm company, OceanEx.

A single 14-megawatt wind turbine of the sort now being built needs just a single connection to a substation and less maintenance than two 7-megawatt turbines that were typical just a few years ago. Maintenance at sea with crews ferried by boat or helicopter is expensive.

Evans confirmed that the project OceanEx is championing for 20km off the coast in the Hunter region will be visible from shore on clear days, while the turbines proposed for the Illawarra could be slightly closer.

Despite this, the industry has broadly maintained community support. Friends of the Earth spokesperson Cam Walker said given the NSW proposals were fairly new, it was difficult to gauge opinion.

“We think there is wide support for the jobs that would come with the development of an offshore industry near cities like Newcastle and Wollongong, which have traditionally relied heavily on fossil fuels for employment and economic activity,” he said. “In Gippsland, we feel that there is solid support for the Star of the South project, which is the only one that has so far advanced in the planning process.”

Wollongong Lord Mayor Gordon Bradbery said the community welcomed energy sources that weren’t driven by fossil fuels and the proposed projects would bring significant economic benefits to the community. He added there had been some opposition within the community about the visual pollution, impact on shipping lanes and whale migrations. These will be addressed as the projects develop.

“At the same time, I think in light of [the] climate change we are experiencing – and its impact on the Illawarra and NSW coastline – I think everyone is on the same page that anything that mitigates carbon emissions [is good],” he said.

For its part, a NSW Department of Planning and Energy spokesperson said the offshore wind industry had the potential to play a significant role in achieving net-zero by 2050.

The Newcastle council has issued a mayoral minute backing the Hunter proposal.

Why not just build them on land?

Despite the extra cost of building and maintenance, there are key advantages to harvesting wind at sea – even in countries like Australia, which unlike wind-power hotspots off the coasts of Europe, has land to spare.

Wind over water is more consistent than that found on land, explains Associate Professor at ANU’s Crawford School of Public Policy, Llewelyn Hughes, who specialises in energy transition.

Further, wind is stronger over water at night and over land during the day. As a result, offshore wind farms perfectly complement the spread of land-based solar and wind in Australia’s energy mix.

But there are historical, political, geographical and even geological factors that make some sites preferable to others.

Wind is stronger and more consistent in Australia’s south-east, and in this part of the country, rich coal seams are found along the coast. As a result when the nation industrialised, coal and power industries coalesced where these seams and deepwater ports could be found together – places like Gippsland, Newcastle and Port Kembla.

Where once the steep undersea drop-off would have precluded building large wind farms at a reasonable distance from shore, new technology allows for turbines to be floated and moored to the sea floor.

The east coast’s power system was built to suck electricity from power stations near these ports and distribute it. These regions evolved into centres of steel making and manufacturing.

Today, as the transition from coal gathers pace, these same regions are starved of new industry and jobs, which offshore wind farms provide; and they offer ports and skilled workforces that the wind industry desperately needs.

The Climate Council expects the industry to need 8000 workers a year from 2030.

Their power stations are already connected to the grid, saving hundreds of millions that would otherwise have to be spent on new transmission infrastructure.

Climate Energy Finance director Tim Buckley said the drawcard of offshore wind is that it adds greater geographical and technological diversity to the energy market. He said Australia had been slower than other countries to take up offshore wind, but its renewable energy sector had come leaps and bounds in the past ten years.

Buckley added there were a few key reasons why offshore wind projects had been delayed in Australia, including the huge capital investment needed to get the projects up – often two or three times the cost of building an onshore wind farm and ensuring supply chains are prepared.

He added another major setback had been the former Liberal government’s attitude towards renewables. “We’ve had chaotic energy policy, there has been total inconsistency between state and federal [governments],” he said, “We now have a situation where there is a level of ambition. I would expect a significant unlocking of private investment capital – much of which has been scared off by the lack of consistent policy until now.”

While the offshore wind farms provide greater energy diversity and security, he added they would make up a portion of the renewable energy push that would be needed if Australia had any hope of reducing its emissions.