Fleetwood Mac sure is hot right now. Scroll past the multiple bangers and bops by The Kid Laroi, Olivia Rodrigo and Tones and I on Apple Music’s list of most streamed songs in Australia for 2021, and the band’s 44-year-old Californian soft-rocker Dreams holds its head high at No. 16.

Before marvelling at the staying power of the old-school pop canon classics though, best find out why from someone who can sing along to every other name on the list: Glass Animals’ Heat Waves is at No. 1 and Joel Corry, The Weeknd, 24kGoldn, Dua Lipa and Tiesto, among others, flesh out the top 10. 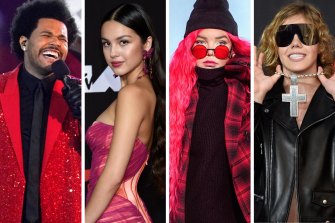 Songs by The Weeknd, Olivia Rodrigo, Tones and I and The Kid Laroi were among the most listened to in Australia in 2021. Credit:AP; supplied

Among Apodaca’s countless imitators was one Mick Fleetwood, who learned how to use TikTok in order to grease the wheels of his good fortune. Some publications called him Fleetwood Mac’s singer. The fact that he’s actually rather famously their drummer matters so little in the new pop order that the error remains uncorrected 14 months later.

New pop order? It’s hard to see this annual streaming charts disruption any other way. It was, of course, instigated in recent years by Spotify, which owns a whopping 32 per cent of the global music streaming pie compared to relative newcomer Apple’s 16 per cent.

Spotify released its list yesterday, one day after Apple, intent on seizing the league table agenda once set by the likes of Billboard or ARIA. And fair enough, too. What music most people are buying does seem a rather quaint signifier of the zeitgeist these days.

So what are most people paying for? Spotify agrees that Aussie rapper The Kid Laroi is the business, beaten only by Taylor Swift, Justin Bieber, Drake and Ed Sheeran at the pointy end of Australian users’ most streamed artists of ’21 list.

The Kid Laroi cops three songs well up both Apple and Spotify’s lists, including Stay featuring Bieber and Without You, the one where he gets away with the apparently hugely bankable refrain, “Can’t make a wife out of a ho”. As runaway streaming screamers of the year go, he’s probably neck-and-neck with Rodrigo, the 18-year-old Drivers License singer from California with (hello) the big TikTok footprint.

On the merits of other products, users of the two services inexplicably diverge. Sheeran’s Spotify-smashing latest album = (Equals) is nowhere in Apple’s lists, while Spotify listeners don’t seem to care for Apple legends Pop Smoke and Luke Combs. Chalk that up to accounting methods maybe, or cross-promotional factors, or other complexities we pop fans don’t need to trouble our pretty heads about. 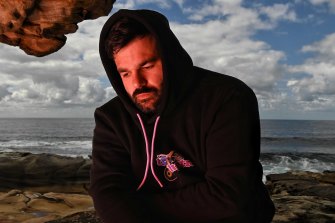 Australian rapper Masked Wolf had a major hit this year in his 2019 song Astronaut in the Ocean. Credit:Nick Moir

And don’t worry if none of these names mean much to you at all. Spotify’s digital elves worked overtime to compile our personalised “Wrapped” playlists of the year: 381 million bespoke hits collections, drawn from the data we selflessly donate with every click. Since Apple bought music recognition app Shazam a few years ago, we’ve been telling them what we like even when we don’t have a clue what it is yet.

Meanwhile, the lists make big news of Bad Bunny, BTS, Doja Cat, Ariane Grande, Lil Nas X… but what’s most interesting is not so much the individual artists enshrined by this year’s algorithms, but the narrow demographics they share. In a totally revolutionised modern music marketplace of infinite choice – free music, any style, any era, for everybody – what’s hot is decided the same way it was when Beatlemania was the go: by trend-chasing teenyboppers.

Speaking of social media, perhaps the most intriguing name to crop up on the music streaming duopoly’s end-of-year lists is Masked Wolf, whose 2019 song Astronaut in the Ocean has since spawned nearly eight million TikTok videos. In turn, the Sydney hip-hop artist had the No. 1 most Shazamed song in the world and more than 800 million streams on Spotify.

It’s a righteous achievement, and the Wolf deserves all the royalties he manages to wrestle from the great sucking vortex of streaming revenue that’s so successfully reshaped the old music business of record stores and sales charts. Still, if he wants to make bank for as long as Fleetwood Mac, he better pray some guy with a skateboard comes up with some funny moves to his song in 40 years time.