HAMBARINE, Bosnia (Reuters) – Thousands of relatives from Bosnia and across Europe gathered in the village of Hambarine for the burial of 86 Bosniak Muslims on Saturday, 27 years after they were killed and dumped in a ravine in one of the most gruesome incidents of the Bosnian war. 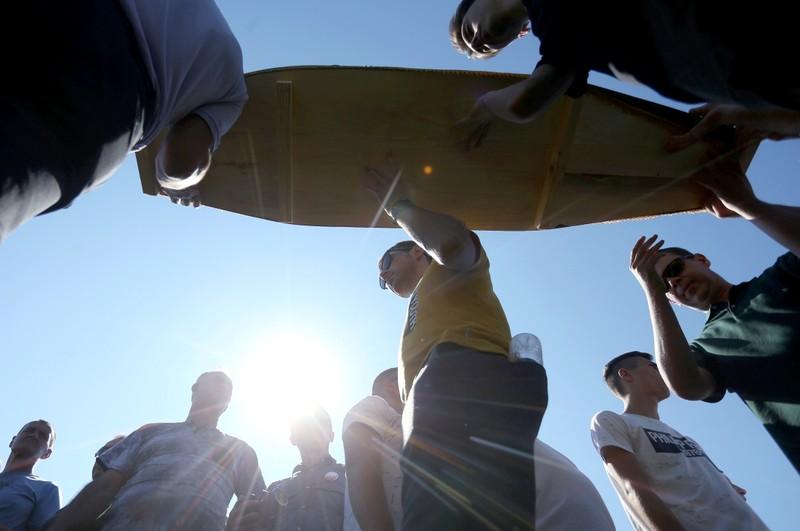 The victims, mainly prisoners from the war-era detention camps for non-Serbs near the town of Prijedor, were told they were being released in a prison exchange but instead were driven to the Koricani Cliffs in central Bosnia, lined up by the edge of the ravine and shot by Bosnian Serb forces in August 1992.

Jasna Elezovic, standing by five coffins draped in green cloth which held the remains of her father, brother, two cousins and uncle in the nearby Kamicani graveyard, said their bodies were found only last year.

“It feels like it all happened yesterday… the anguish remains the same,” she told Reuters.

Only a dozen of around 200 men survived the massacre, by tumbling or jumping down the steep, 100-meter-deep ravine. The victims were recovered under rocks piled over them to conceal evidence of the atrocity.

Eleven Bosnian Serb ex-policemen were convicted for the crime, including Darko Mrdja who was jailed for 17 years by the Hague-based international war crimes tribunal. The remainder were convicted by the Bosnian war crimes court.

The suspected mastermind of the massacre, Simo Drljaca, the Prijedor police chief, was shot dead in an exchange of fire with NATO-led peacekeeping forces in 1997 in their first attempt to arrest any of the suspects at large.

The Prijedor area saw some of the most brutal and violent ethnic cleansing attacks in 1992 by the Bosnian Serb police and army against Bosniaks and Croats.

Villages were razed, thousands of people were shipped off to notorious detention camps, such as Omarska and Kereteram, more than 3,000 non-Serbs were executed and tens of thousands were driven from their homes.

“I was only 12 when the crimes happened but trauma still persists and it is difficult to cope with it,” said Aida Garibovic, 39, who came to this northwestern village to bury an uncle, next to the graves of her father and five other relatives, who were killed in Omarska.

Like many other war-related issues in the Balkan country, the event was ignored by Bosnian Serbs who deny their forces were responsible for large-scale crimes including killings, expulsions and unlawful detention of civilians and reject the rulings of international and domestic courts.

Feuding along ethnic lines continues to thwart the country’s ambitions of joining the European mainstream.