Kaley Cuoco makes work fun for Brad Goreski! The stylist opened up about dressing the pregnant actress for the 2023 awards show season.

About Last Night: See the Best Dressed Stars on the Red Carpet and Beyond

“She’s always so grateful, so easy to work with,” Goreski, 45, told Us Weekly exclusively while promoting his new MTV show, The Real Friends of WeHo. “We’re always laughing and having a good time. She’s fantastic.”

The fashion guru had the pleasure of styling Cuoco, 37, for the 80th Golden Globes on January 10. For the ceremony, the Big Bang Theory alum — who was nominated for Best Actress in a Musical or Comedy TV Series for her role in The Flight Attendant — looked whimsical in Vera Wang. The dainty lavender gown featured soft pleated fabric that complemented her growing baby bump. The dress was finished with bow-adorned straps that were covered in rhinestones. 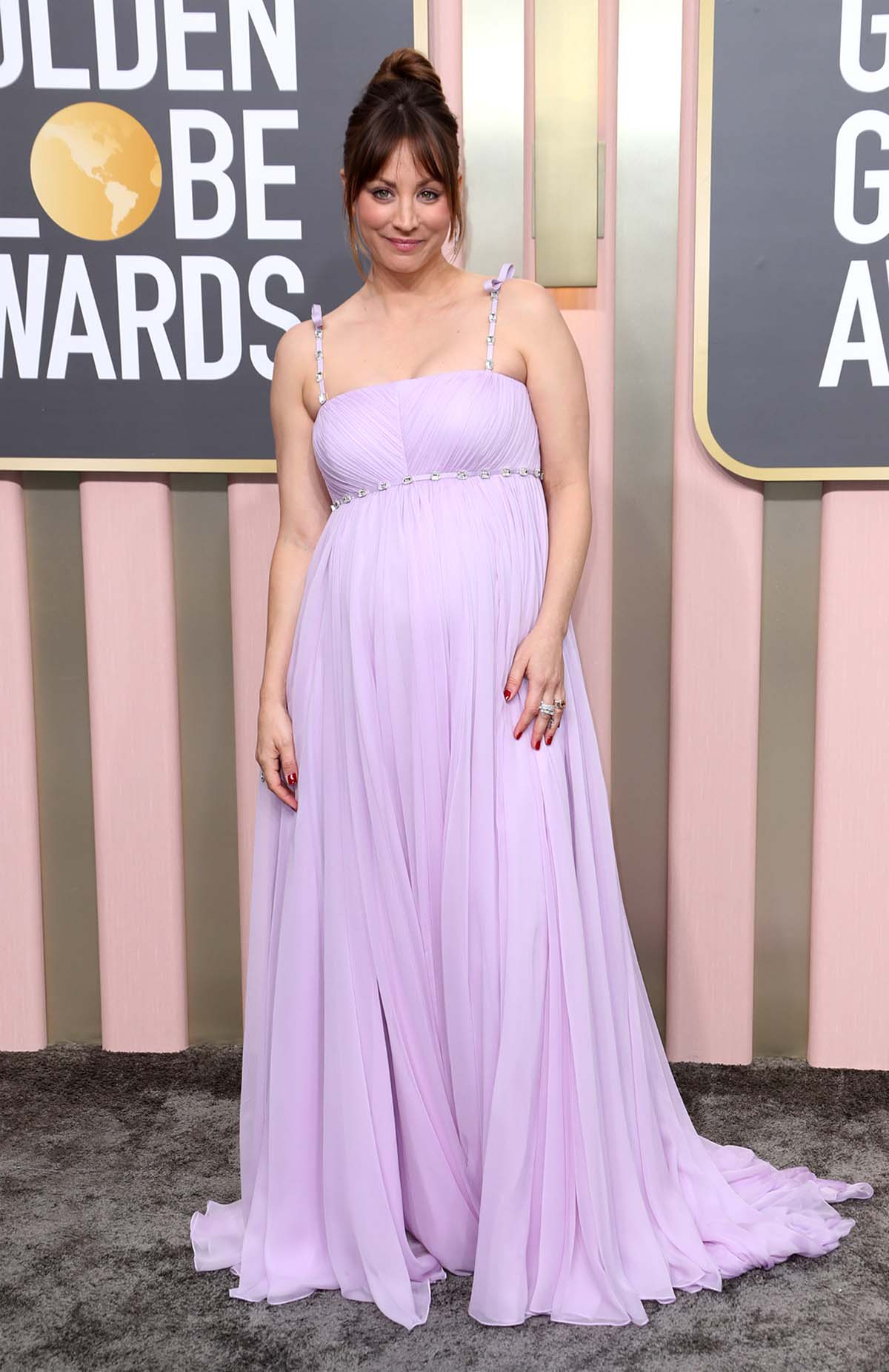 “I was expecting us to try on a bunch of different dresses and we had Vera Wang custom make her the gown,” Goreski told Us. “She’s worn [the label] before and they made it very seamless.”

The TV personality shared that Cuoco was surprisingly confident in the process despite being “months pregnant” and not knowing how certain pieces may fit on her changing body. “She was like, ‘Everything will be perfect … I trust them,’” Goreski said Cuoco told him. (The Wedding Ringer star and boyfriend Tom Pelphrey announced in October 2022 that they are expecting their first child together .)

The task was just as effortless for the Critics’ Choice Awards on Sunday, January 15. That night, Cuoco stepped out in a black design by Dior. The floor-length garb featured a billowing construction, wide sleeves and delicate embroidery at the neckline. For glam, the Meet Cute star rocked a smoky eye and wore her newly-dyed brunette tresses in a soft bouncy style. 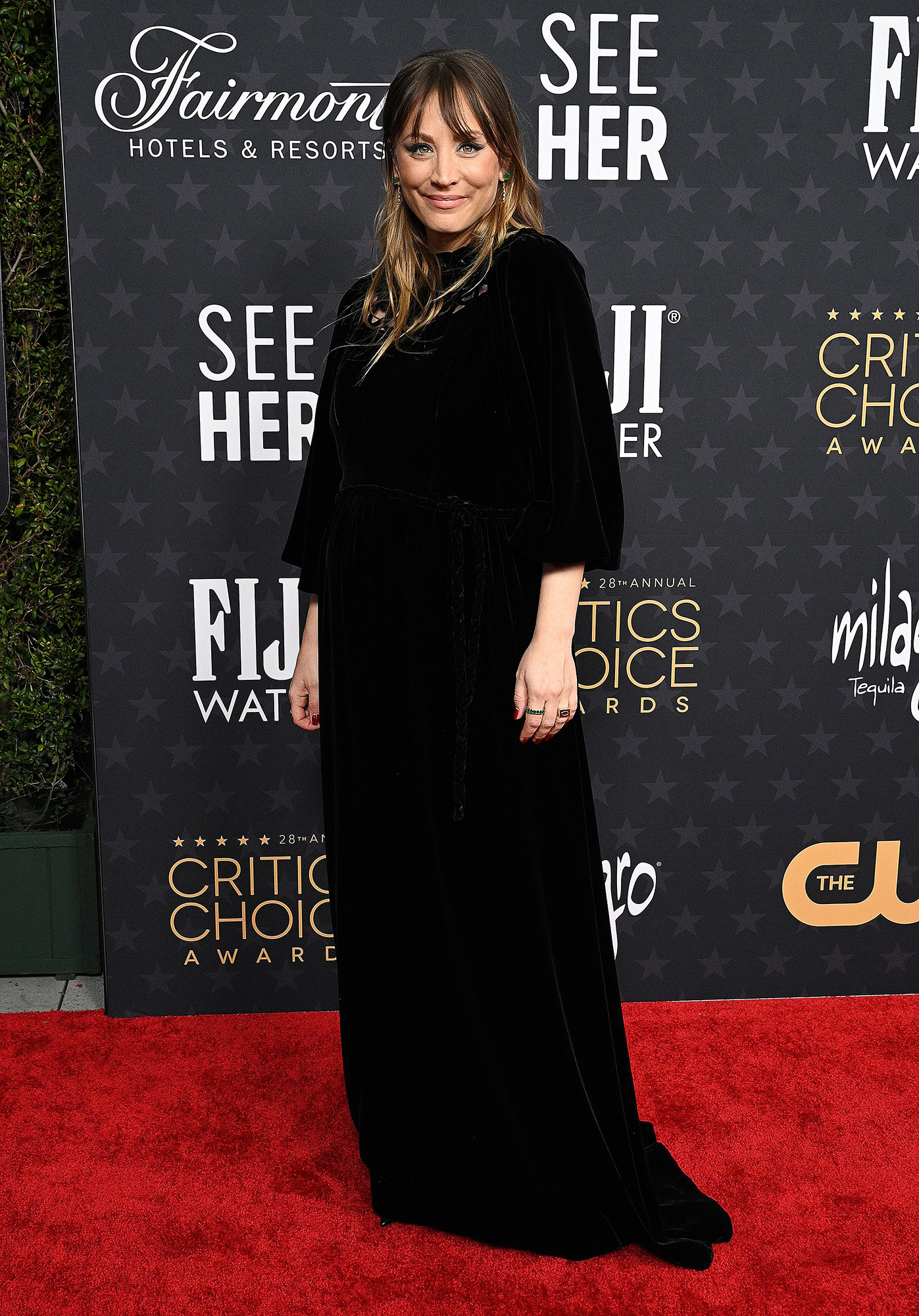 “It was one of the most amazing things I’d ever seen in my styling,” Goreski gushed. “I tried it on her. We sent photo of what the alterations needed to be and then we sent it to Paris for their couture tailors to work on. We did a refit on it, zipped it up and it was absolutely perfect.”

Goreski also raved over Cuoco’s “epic” baby shower. “We were calling it a party,” he said. “It was amazing. I remember pulling up to her house and asking, ‘What’s that? Is that a big tent over there?’ I went and I was like, ‘Kaley, what are you doing?’ She went, ‘You’re not even ready for this.’”

He added: “It was magical. It was incredible. It was so beautiful … She’s so ready and she’s gonna be the best mom. She’s just a good person down to her core.”

Cuoco and Pelphrey, 40, hosted the soirée at their California home on January 7. The celebration included a light show, good music and lots of dancing. In addition to Goreski, the bash was attended by Ali Fedotowsky-Manno, Ashley Jones and Halloweentown star Kimberly J. Brown. Cuoco’s sister, Briana Cuoco, and their parents, Layne and Gary Cuoco, were also in attendance.

Kaley and Pelphrey announced their romance in May 2022, nearly one month before her divorce from ex-husband Karl Cook was finalized.