Tricky new brainteaser challenges puzzlers to find the doughnut among the pool floats – but can you beat the 22 second record?

A tricky brainteaser has been released to celebrate the start of the summer – and it’s leaving even the keenest of puzzlers perplexed.

The busy image, created by Gala Bingo, challenges netizens to find the doughnut among a sea of colourful pool floats.

However, with endless circles floating in a turquoise pool, it may not be as easy as it seems on first glance.

According to the creators, the average time taken to solve this puzzle is 22 seconds – but how long will it take you to find the out of place pastry?

Scroll down for reveal 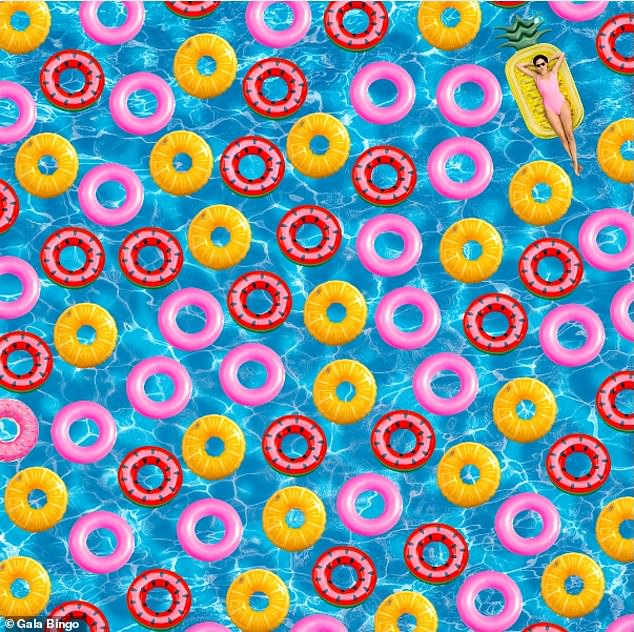 This perplexing puzzle, created by Gala Bingo, challenges netizens to find which of the pool floats is actually a doughnut

The tricky visual, which also features a lady sunbathing on a lilo, has left even the most eagle-eyed puzzlers scratching their heads.

If you’ve taken your time to have a look and are still none the wiser, the answer resides towards the bottom left of the picture.

But don’t worry if you didn’t manage to find it, as there have been plenty of other brainteasers sweeping the web for you to try your hand at.

Another graphic that’s been confusing puzzlers in recent weeks is one created by TOMY. 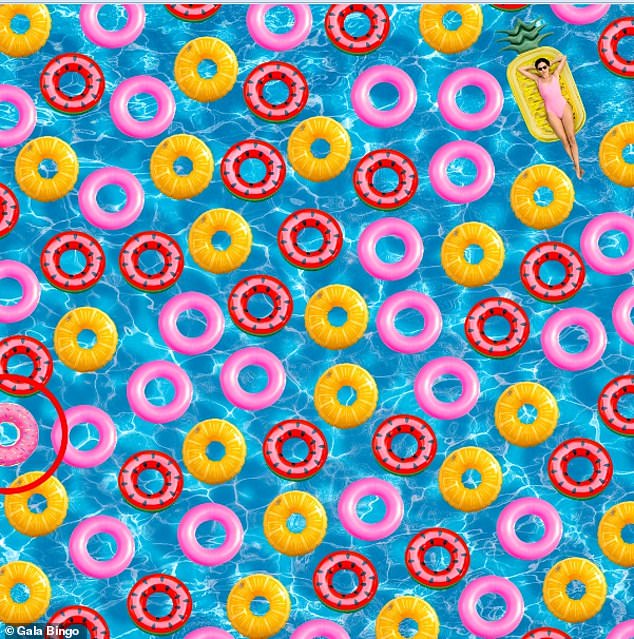 It challenges the public to find a hidden ice lolly among some tasty-looking ice creams.

The current record stands at 12 seconds – but can you do any better?

The puzzle was released in keeping with the launch of the toy company’s new besties collectibles range, Ritzy Rollerz.

The challenging brainteaser features a pink, blue and green coloured ice lolly hidden among a sea of ice creams

But the combination of different colours makes spotting the sought-after object all the trickier to find.

For those keen for the reveal, the lolly can be spotted towards the right-hand side of the colourful image.

If you’re still struggling and are after a clue, the delicious treat is pink, blue and green.

The answer, circled in red, can be found towards the right hand-side of the colourful and busy graphic

Another mythical mind-boggler has been created by ScS, as dragon fever takes the nation by storm this spring, thanks to the Game of Thrones.

Nobody can find the egg in less than 29 seconds – but could you be up to the challenge? 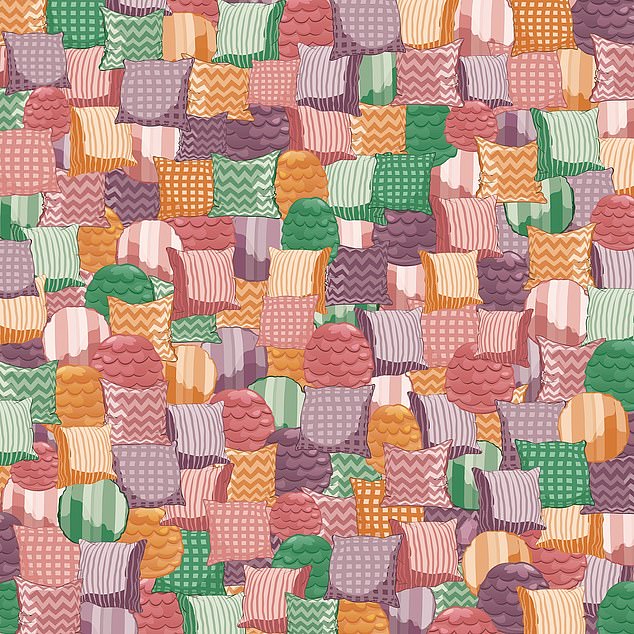 According to the creators, nobody can find the colourful egg in less than 29 seconds – but could you be the one to hunt it down?

Craig Smith, Product Development Co-ordinator from ScS, said: ‘Having created our very own dragon sofa, and with Easter on the horizon, we wanted to put a twist on the traditional Easter egg hunt and help refine people’s searching skills in the process.

Eagle-eyed viewers should be able to spot the patterned purple egg tucked away in the bottom right hand side of the image, nestled between a pink and orange cushion. 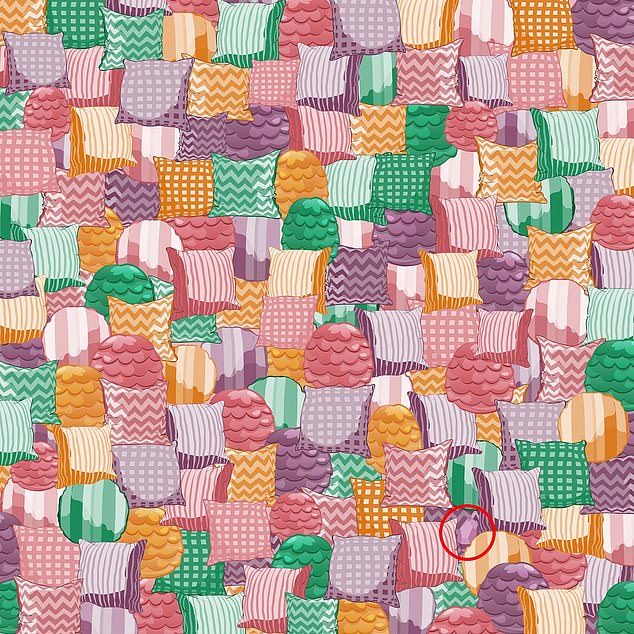 The little purple Dragon’s egg is hidden in the bottom right of the image, tucked between a pink and orange cushion

Weddings are some of the most joyous occasions of the year, be it with friends and family, or incredible star-studded affairs.

But with wedding season approaching, stationary company Norma & Dorothy have created a fun and lively scene featuring every bride and groom’s worst nightmare – a pair of lost rings.

The fun and lively graphic depicts the many wedding guests, along with brides and grooms, waiters and bridal party, hunting for two tiny hidden rings. It’s made even trickier with the addition of bustling dogs and wild party decorations.

They’ve tasked people with thirty seconds to find the tiny rings, and help the brides and grooms finally get to the alter – but how will you fare?

Somewhere in the busy wedding party scene are two tiny wedding rings hidden amongst the chaos – but can you spot them?

The busy party scene shows everything from two brides holding hands to comfort one another, to guests scratching their heads as they hunt for the rings.

To make it even harder, there are also several dogs causing chaos in the wedding scene, as well as stacks of cake.

Hidden amongst all the fun are two tiny rings, but can you find them in the 30 second challenge?

They’re tiny gold bands with a huge rock of a jewel on them – the image you’re looking for looks a little like the below ring.

You’re hunting for the lost rings that look a little like this in the above picture – but remember, they’re tiny!

For those eager for the reveal, the answer lies towards the top right of the picture, where the ring is peaking out amongst a bouquet of flowers.

The second is at the centre bottom, right next to a waiter’s none-the-wiser hand.

Don’t worry if you didn’t manage to find it, as there have been plenty of other brainteasers sweeping the web for you to try your hand at. 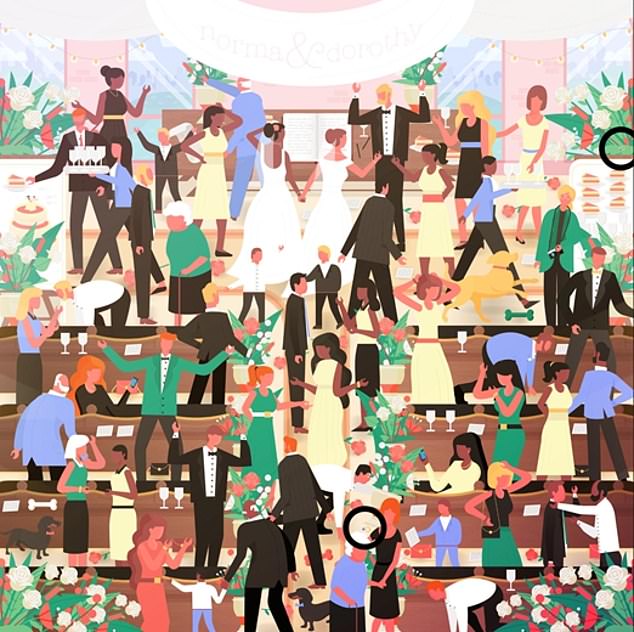 The tiny rings look as though they’ve been dropped on the aisle at the double wedding, as well as in a flower arrangement

With the sun starting to make an appearance from behind the clouds, it won’t be long until many of us will be jetting off on our holidays.

But with airport parking never a fun task, Holiday Extras are hoping to provide a little escape and light relief for our travels by challenging the nation to the ultimate game of spot the difference.

At first glance the left and right-hand side of the image look identical, but inspect it a little closer and all is not quite as it may seem.

The busy graphic asks the nation to identify the 11 differences between two airport parking images – and, with a time to beat of 52 seconds, it’s got many people in a tight spot. 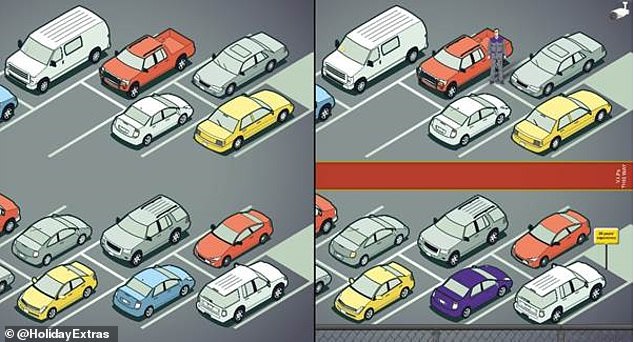 While the left and right hand side of the picture may seem like a mirror image, there are 11 noticeable differences between both – but can you find them?

‘When it comes to Meet and Greet parking, we really invest in the little touches that make a big difference to our customers, so we wanted to see if Brits had the same eye for detail,’ said Seamus McCauley from Holiday Extras.

‘As a company, we believe in making the most of holidays by limiting the amount of hassle travellers experience along the way. Parking at the airport can be stressful for some so we work with our hand-picked providers to give customers the red tarmac treatment instead.’

If you’re struggling and are eager for a few hints, try looking at the colour of the cars and any surrounding details in the parking lot.

But if 52 seconds have long gone and you’re still none the wiser, take a look at the answers below – which include red tarmac carpet and a missing windscreen wiper on the top right car. 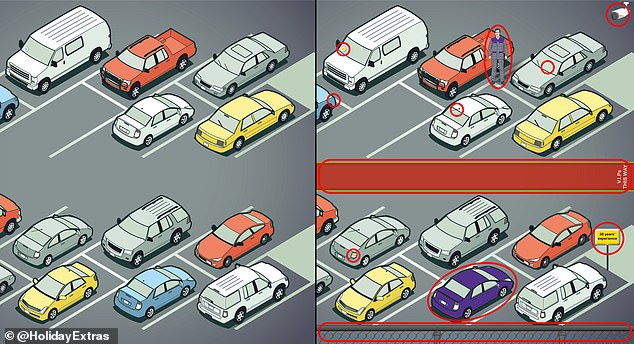 The answers include red tarmac carpet and a missing windscreen wiper on the top right car, along with a driver who has just stepped out of his car