A bride was slammed after revealing plans to ban all guests over the age of 70 from her wedding because they might take some of the attention away from her.

The woman, thought to be from the US, took to Reddit and asked if she was the a*****e for not wanting to invite any elderly guests, including her and her fiancé’s grandparents.

She revealed that her fiancé’s grandmother has Alzheimers’ Disease, which she described as ‘really depressing’ and that her own elderly relatives need a lot of help and attention.

The post was widely condemned by other Reddit users who said the bride was selfish. However a handful of commenters said it was no different to banning children from a wedding. 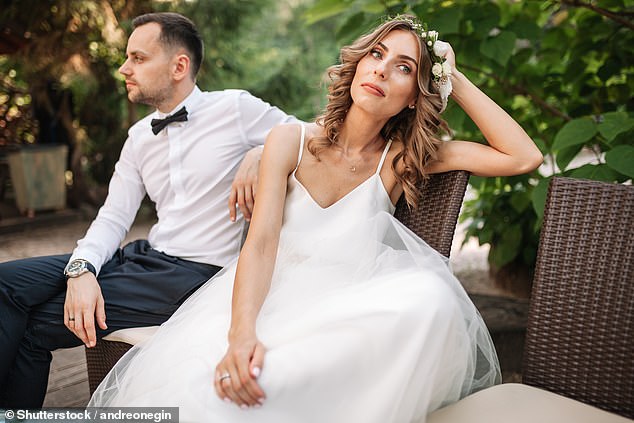 The woman, thought to be from the US, took to Reddit and asked if she was the a*****e for not wanting to invite any elderly guests, including her and her fiancé’s grandparents 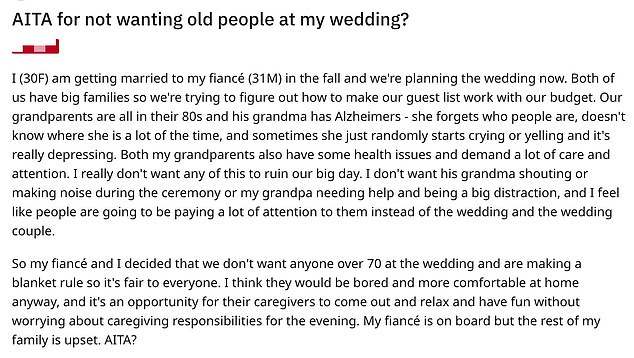 According to the post, the bride did not want elderly and unwell relatives stealing the limelight at her wedding

The post said: ‘My fiancé and I decided that we don’t want anyone over 70 at the wedding and are making a blanket rule so it’s fair to everyone.

‘I really don’t want any of this to ruin our big day. I don’t want his grandma shouting or making noise during the ceremony or my grandpa needing help and being a big distraction, and I feel like people are going to be paying a lot of attention to them instead of the wedding and the wedding couple.

‘So my fiancé and I decided that we don’t want anyone over 70 at the wedding and are making a blanket rule so it’s fair to everyone.

‘I think they would be bored and more comfortable at home anyway, and it’s an opportunity for their caregivers to come out and relax and have fun without worrying about caregiving responsibilities for the evening. My fiancé is on board but the rest of my family is upset. AITA?’

The majority of responders criticized the poster for her unkind attitude towards her older family members, with one writing: ‘Jesus Christ you have got to be kidding. You are the worst. YTA [you’re the a******].’ 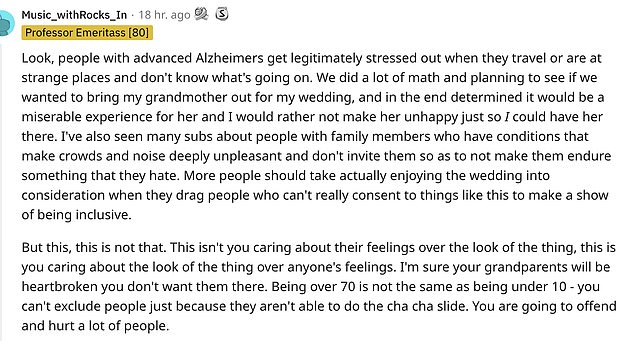 Another added: ‘For real. YTA Op. If my Cousin or sibling was getting married and tried to pull this crap I would 100% skip their wedding and take my grandparents out for dinner or something. And I’d implore my other family members to do the same.’

‘Being over 70 is not the same as being under 10 – you can’t exclude people just because they aren’t able to do the cha cha slide. You are going to offend and hurt a lot of people.’

Some commentators, however, took a different view, and felt that it was fair to exclude old people, on the basis that children are regularly left out of weddings.

One poster wrote: ‘I don’t see how this is different from having a child-free wedding because children are disruptive. So, weird but NTA I guess.’

Another agreed, saying: ‘NTA. This sub is all for child free weddings but apparently aren’t on board with excluding other ages. It’s your wedding and you’re allowed to invite whoever you want. I can understand not wanting people there that could be a distraction. Especially his grandmother that won’t even remember it.’

A further poster said: ‘I love how everyone is fine with child-free weddings, but add an upper-age limit and they lose their mind. It’s your wedding, do what you want, but don’t be surprised if people don’t come.’ 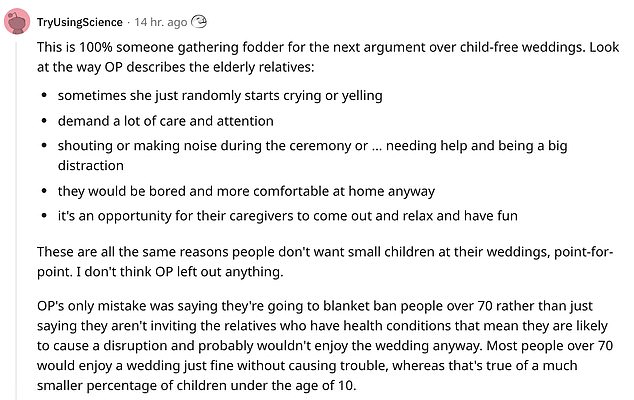 Multiple commentators thought the post was not genuine, but rather an attempt by the poster to make a point against childfree weddings

The post was so controversial that a number of respondents felt it could not be genuine, with some suggesting that the poster could be trying to make a point.

One wrote: ‘This is 100% someone gathering fodder for the next argument over child-free weddings. Look at the way OP describes the elderly relatives…These are all the same reasons people don’t want small children at their weddings, point-for-point. I don’t think OP left out anything.’

Another agreed, adding: ‘That was my thought. They’re setting up for an argument that if we can’t ban old people from weddings, then child-free weddings shouldn’t be allowed either.’

A third said: ‘This is what I was thinking (hoping) too! how heartless can someone be? If this were anyone in my family, I’d be skipping the wedding as would everyone else because no one in my family would treat loved ones like that. Shame on you, OP. Totally YTA.’