War veteran, 100, who was robbed of £4,000 when his home was burgled while he was in hospital recovering from a fall says he ‘appreciates’ strangers raising £17,000 – but tells GMB ‘a lot of it’ will go to charity

A Yorkshire war veteran who was left shocked and upset after his home was burgled while he was undergoing an operation in hospital has thanked strangers for raising £17, 000 – before revealing he’ll be donating much of it to charity.

Former RAF flying boats pilot Len Parry, from Skipton, North Yorks, who escaped from the Japanese after being taken prisoner in Singapore during the Second World War, kept nearly £4,000 in the safe which he used for emergencies and to give to his grandchildren for their birthdays.

The entire safe was stolen, but among the gloom there was good news as the kindness of strangers saw a fundraising page set up on his behalf –  and has so far reached just over £17, 000.

Appearing via video link on Good Morning Britain alongside his son-in-law Edward, Len was asked what he was planning to do with all of the money, to which he replied: ‘Well obviously a lot of it will go to charity. The family will get together and decide what we’re going to do with it all.’ 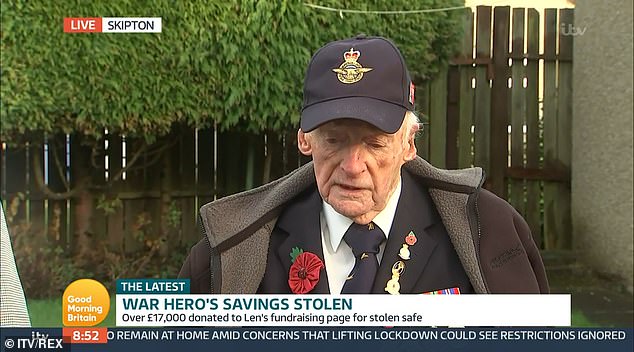 Len Parry, 100, from Skipton, North Yorks, who escaped from the Japanese after being taken prisoner in Singapore during the Second World War, appeared on Good Morning Britain today and told how he was burgled while he was undergoing an operation in hospital 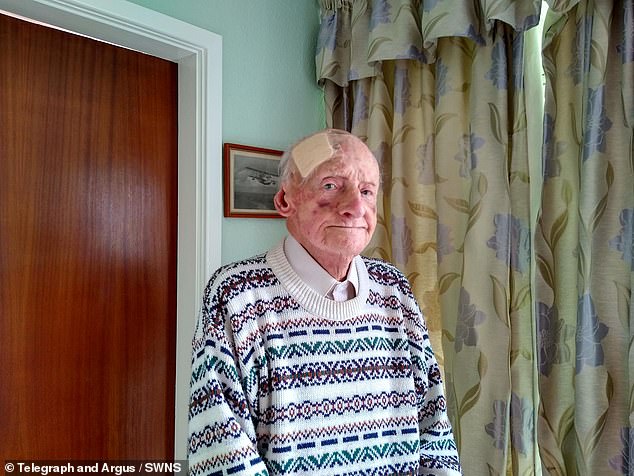 The widower had checked into Bradford Royal Infirmary for a small procedure but lost his balance as he was taking his jumper off and banged his head on the ground. Pictured, Len’s injuries

The widower had checked into Bradford Royal Infirmary for a small procedure but lost his balance as he was taking his jumper off and banged his head on the ground.

Doctors recommended he stay overnight for observations which is believed to be when the opportunistic thieves struck.

‘I’d been in hospital for about two days,’ explained Len. ‘I had to go upstairs for a cheque out of the safe and there was no safe there, of course. I went into shock, obviously.

‘The safe was bolted to the floor but they used a crowbar to get it out and take it away.’

When asked how he felt after realising the safe that contained all of his money and valuables were gone, Len added: ‘It’s not just the money, it’s all the documents – passports, driving license and all that sort of thing. 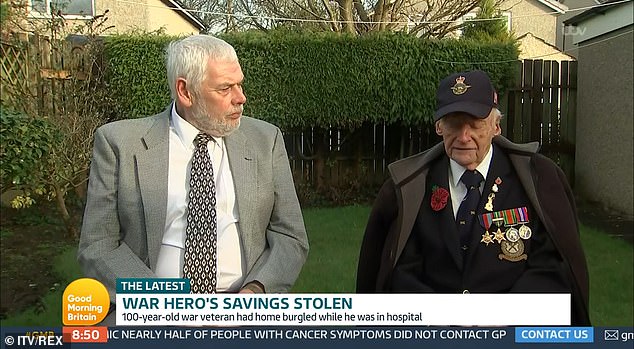 Len (pictured right, and left, son-in-law Edward) escaped from the Japanese after being taken prisoner in Singapore during the Second World War

‘The confusion you a have to go through to retain your bank books and all that business – it’s a bit roughly really.’

Len went on to explain how he’d saved that money for a purpose, adding: ‘I like to keep a bit of money to one side to pay tradesmen and things like that.’

But when the Yorkshire Post found out about it, they decided to tap into the kindness of the community.

Speaking of the moment he learned a fundraising page had been set up to try and get some of that money back, Len admitted: ‘It was a bit embarrassing to be truthful.

‘I know it’s a wonderful thing for people to contribute all this amount of money and I very much appreciate what’s going on at the moment.’ 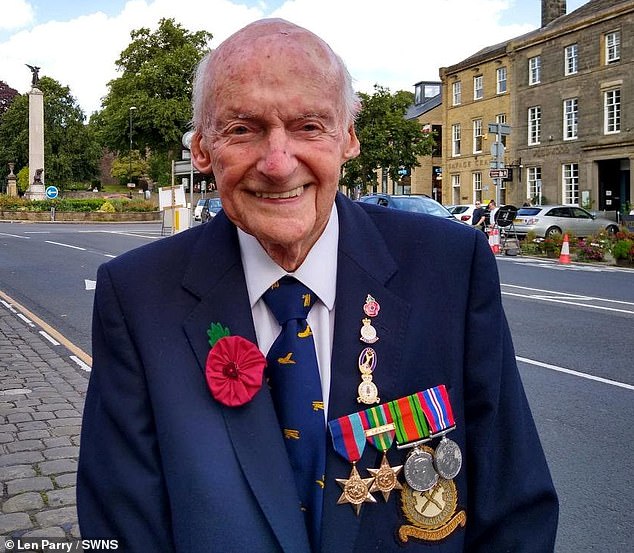 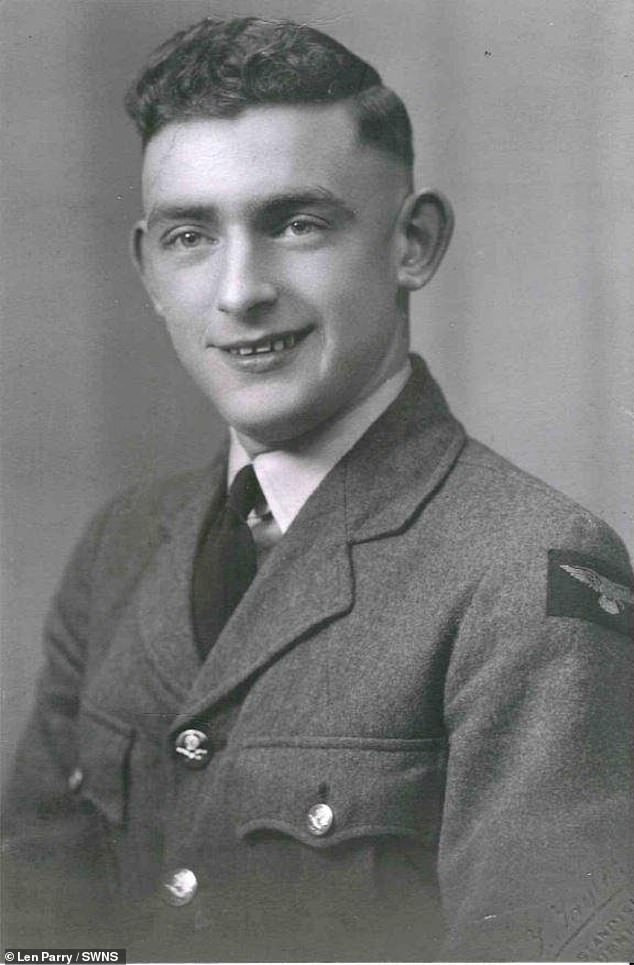 The former RAF flying boats pilot was taken as a prisoner of war, but managed to escape when the Japanese soldiers got drunk while guarding the captives

Len’s son-in-law Edward added: ‘I’d like on behalf all of the family to thank everybody who has contributed to this fundraiser. I think it’s absolutely marvellous that the Yorkshire Post has got behind him and done this.’

‘I’ve been married to his daughter for nearly 45 years now and know Len very well and it did upset him very much indeed. It’s something a guy of 100 obviously shouldn’t have to go through.’

Len was born in Burnley, Lancs., and left school at the age of 14 to work as an apprentice gas fitter.

He was taken prisoner in Singapore during World War Two but managed to flee when Japanese soldiers got drunk while guarding the captives.

After being demobbed in June 1946, he returned to being a gas fitter.

He moved to Skipton in 1950 to marry his beloved wife Muriel and the couple had three children – Nigel, Rosamund and Nicholas.