Erik Thomson describes his culinary repertoire as “rustic”. When the actor-producer gets busy in the kitchen of his South Australian home, he says, “I’m not a fine-dining cook and I don’t have a huge array of recipes. What I think I do quite well is the Jamie Oliver-esque stuff, beef bourguignons, shepherd’s pies. I love cooking in winter because I love hearty food. Maybe it’s my Scottish heritage.”

In the new six-part comedy Aftertaste, Thomson’s character is less genial Jamie Oliver than volatile Gordon Ramsay. His Michelin-starred restaurateur Easton (formerly Jimmy) West has the kind of volcanic temper indelibly associated with the Scotland-born chef. Trained in the classical French tradition, Easton’s worked his way through the ranks from dish-pig to international renown. However, as the series begins, a meltdown in his new eatery – a response to criticism that sees him hurling profanities, punches and a pig carcass – ruins his reputation, shatters his empire and sends him back to his South Australian hometown of Uraidla. 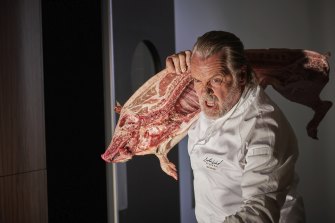 Thomson concedes that some of the fancy knife skills seen on screen “might not” be him. But while he can’t julienne vegetables like a maestro, he has become one of the best-known faces on Australian TV following his time as Dr Mitch on the hospital drama All Saints, a stint as Australia’s favourite dad, sparkie Dave Rafter, on Packed to the Rafters, and widowed father George Turner in 800 Words.

Over the past year, as the industry has been afflicted by shutdowns, he’s been busy with culinary comedy and shooting a sequel, Back to the Rafters, for Amazon Prime. “Actors are probably like cockroaches,” he chuckles, modestly understating how highly sought he is. “We’re survivors because this is normal for us: having work taken away from us, not knowing what’s going to happen next week.”

Thomson’s involvement with Aftertaste began when he read a pitch document titled Yes Chef. “I was looking for a project that I could be in and produce,” he says. “I laughed all the way through it and the next morning I spoke to the writer, Julie De Fina, and we made a pact to do it.”

“We didn’t want to water it down … we had to go full arsehole.”

After the ABC expressed interest in the project, the pair met with with Closer Productions. “We wanted to make it locally,” Thomson says. “Closer was about to make The Hunting; they’d done F—ing Adelaide and worked on a couple of interesting feature films. I felt that it would be in safe hands and, given my background is more in commercial television and theirs is more edgy and independent, I thought it would be a good marriage.”

Uraidla might sound like a fictional town, but Thomson says its Adelaide Hills location is “the home of a lot of small, interesting restaurants, natural winemakers and organic vegetable growers; a cool little post-hipster world of food and wine”. Aftertaste proudly displays the region in lush winter greens, with open fires cosily burning and backyard firepits in use.

“People have looked down their noses at Adelaide and its surrounds, but it’s a really beautiful place,” says Thomson, who, with his wife, actress Caitlin McDougall, bought a house in Port Willunga in 2006 and has based the family there for the past seven years.

Thomson describes Easton as being “in his early 50s and he’s been away for 30 years”, adding: “He forgot about his family and got caught up in his own ego. People excused his behaviour because he was a genius and he thought he was a genius too. We meet him at a time when you can’t behave like that any more. He gets cancelled, pushed out of the industry, and he’s forced to come back and sleep in his childhood bedroom and try to work out what to do next.” 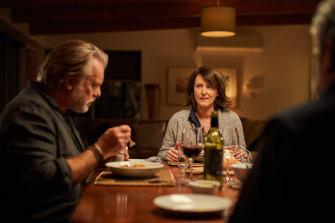 Thomson as Easton and Susan Prior as his sister, Denise.Credit:ABC

What he does comes to involve his bubbly niece, Diana (Natalie Abbott), a talented cook who takes inspiration from her nan’s recipe book and is trying to make a living from a roadside cake stall. It also involves his resentful sister (Susan Prior), his declining dad (Peter Carroll) and a local winemaker (Rachel Griffiths).

“We’re looking at the changes in gender power,” Thomson says. “At the age of the angry, white, middle-aged, middle-class male, having fun with it and hopefully delivering a bit of a kick as well. We worked at finding the right tone, trying to make sure that we weren’t making something that was flimsy – that it had a bit of complexity. We wanted to make an entertaining show, but we couldn’t just tell jokes about chefs. It’s that dance between having fun with it and having a character that’s substantial.

“With comedy, typically the characters don’t evolve. We’re not dealing with that in a pure sense; this is more of a dramatic comedy. One of the shows that’s been an inspiration, and something to aspire to in terms of quality, is Fleabag, which can be laugh-out-loud but it’s got an undercurrent of serious stuff.”

Thomson says he found some of Easton’s eruptions challenging: “Through the season, you see him soften, but that volcano is just an inch away. I found shooting that stuff pretty hard, but we didn’t want to make any apologies or water it down and make him an affable arsehole. We had to go full arsehole.

“The first three to five minutes in any series are critical, and this starts with a bang, with a principal character who’s the antagonist, a bit of a villain. It’s risky, but hopefully we’ve got the hooks in.”